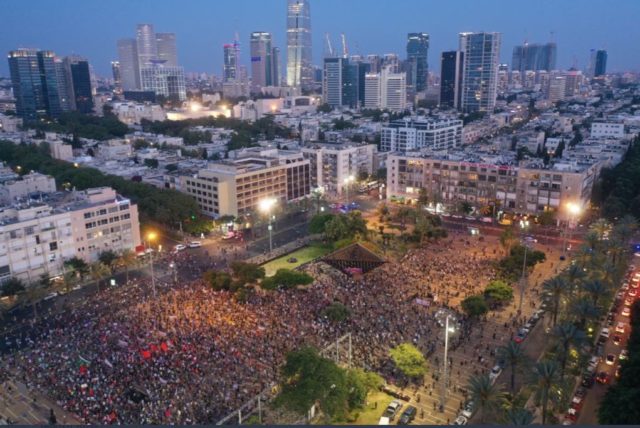 Police urged participants to wear masks and adhere to social distancing guidelines to allow the rally in Rabin square in the center of Tel Aviv.

Attendance estimated at 6,000 people in what appeared to be the most massive protest in the country since the start of the coronavirus pandemic. The demonstration was organized by the left-wing Meretz party, Arab Joint List, and several other left-wing rights groups.

“We cannot replace an occupation of dozens of years with apartheid that will last forever,” MK Nitzan Horowitz, the head of Meretz shouted  “Yes to two states for two peoples, no to violence and bloodshed,” he continued. “No to annexation, yes to peace.”

Horowitz said that annexation would cost Israel millions as the economy is already staggering under the coronavirus pandemic.

He called out the Blue&White leaders Defense Minister Benny Gantz, Foreign Minister Gabi Ashkenazi, and the Economy Minister Amir Peretz, allowing the prime minister to begin moving forward with annexation on July 1 against their voters will. 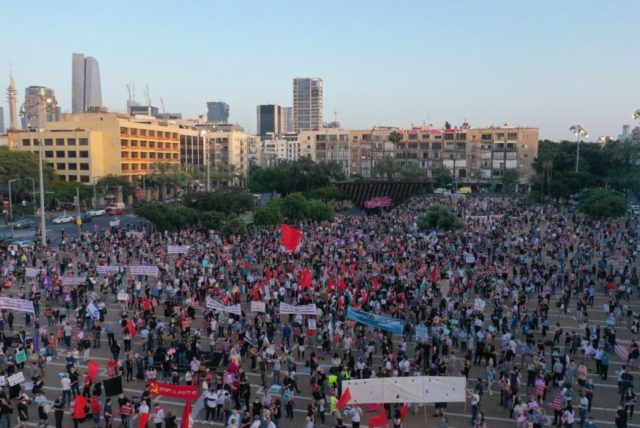 Protestors gathered under the banner “No to annexation, no to the occupation, yes to peace and democracy”. Many waved Israeli and Palestinian flags, with several dozen holding up pictures of Iyad Halak, an unarmed Palestinian man with autism who was shot dead by police last week while holding a cellphone. Police said they believed he had a gun; he was, and apparently did not understand the officers’ orders to stop.

Tamar Zandberg, Meretz MK savaged Trump’s peace plan as “a cursed deal between one man who’s trying to win an election and another who’s trying to escape a corruption trial,” referring to Trump and Netanyahu.

She said: “Trump is not a friend of Israel. Bibi [Netanyahu] is not good for Israel.”  ironically echoing settler leaders who oppose the US plan due to its backing for a Palestinian state. “This deal has nothing to do with what is good for us, Israelis and Palestinians who live here in the Middle East.”

She said the annexation would “officially make Israel an apartheid state… sovereignty without citizenship is apartheid,” she asserted.

A video address by U.S. Democratic Senator Bernie Sanders was screened. “It has never been more important to stand up for justice, and to fight for the future we all deserve,” said Sanders. “It’s up to all of us to stand up to authoritarian leaders and to build a peaceful future for every Palestinian and every Israeli.”
The Palestinians want an independent state in the West Bank, East Jerusalem, and the Gaza Strip, territories Israel captured in a 1967 Middle East war.

Police said five protesters were detained, including a photographer from the Haaretz daily who was covering the protest. The photographer identified himself as a journalist but was forcefully apprehended pushed by police officers to the ground and arrested while holding the camera and trying to execute his journalistic mission.

Press and Media Council call Israeli police to respect the right of journalists and photographers to covering demonstrations, and avoiding violent arrests of press ding their jobs in the context of their right to a proper democratic regime.