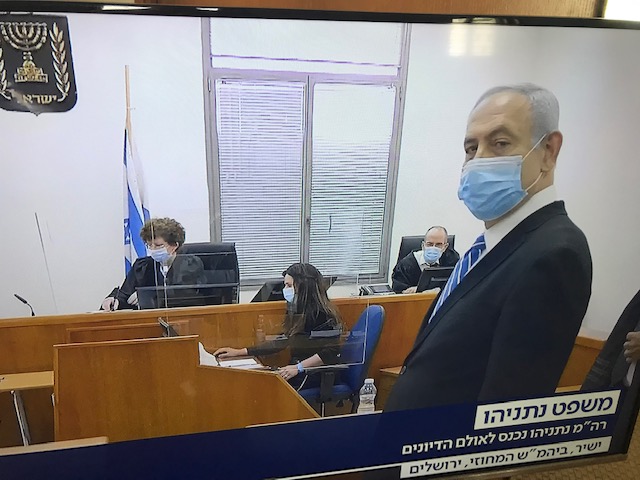 Prime Minister Benjamin Netanyahu slammed the corruption charges against him as “slanderous and delusional” as he entered the Jerusalem courtoom on Sunday, to hear the arraignment against him.

Netanyahu along with his entourage arrived at the Jerusalem District Court close to 2:30 pm, after his request to have his lawyers represent him instead was rejected. Netanyahu’s co-defendants Shaul Elovitch and Arnon Mozes, Ynet publisher, also arrived at the courthouse for the opening hearing.

“They’ve sewn slanderous and delusional cases,” said the prime minister in a statement shortly after arriving at the courthouse. “The objective is to topple a strong prime minister from the rightist camp and thus to remove the right-wing from leadership for many years.”
He called for the court proceedings to be broadcast live on TV to ensure “full transparency … I stand before you with a straight back and head raised high,” he said.

“I want the public to know the whole truth and therefore I demand from the court complete transparency. Let it all be broadcast live, uncensored and unedited.” 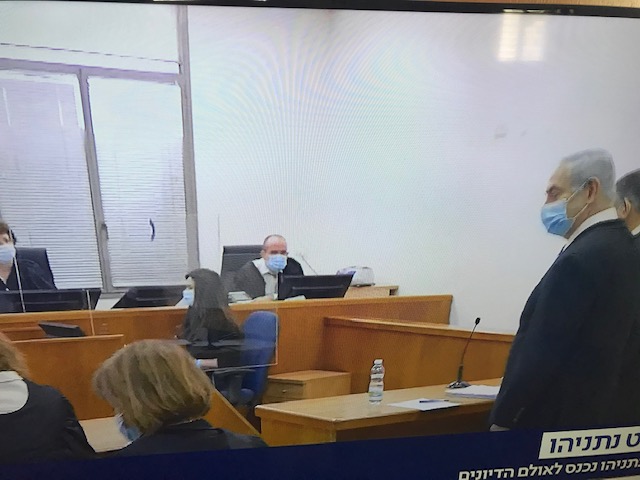 Medial outlets and large crowds of pro and anti-Netanyahu protesters began gathering outside the court, hours before the opening hearing.
Meir Dahan, 52, from Yavne, was one of the first to arrive outside the courthouse. “The accused from right-wing bloc is sitting on the defendants’ bench,” he said. “He wins elections one after the other, but his values do not match the values of the left, they need to overthrow our leader,” he added.

“The entire right-wing camp is sitting on the defendants’ bench and as a defendant, I arrived at the courtroom.”
In addition, several of Netanyahu’s Likud party ministers, including the newly appointed Internal Security Minister Amir Ohana and Transportation Minister Miri Regev, arrived to back him.

“The people had their say at the ballot box,” said Regev. “I expect the judges not to fall into the trap set up by the media. I believe in the prime minister. I really hope the justices will do justice.”

Earlier, Netanyahu held his first cabinet meeting with the new government just hours before heading to court. Neither he nor any of his ministers addressed the looming trial but the country’s outgoing religious affairs minister wished Netanyahu that “God will bring the truth out” at his trial.

Opposition leader Yair Lapid accused them of fomenting violence and trying to intimidate the judges. “Netanyahu is trying to drag us into a civil war to save himself from trial,” he told Ynet.

Netanyahh’s proceedings were supposed to begin in March, but were delayed by his justice minister who issued restrictions on the courts amid the coronavirus crisis.

He faces charges of fraud, breach of trust, and accepting bribes in a series of corruption cases stemming from ties to wealthy friends. He is accused of accepting lavish gifts and offering to grant favors to powerful media moguls in exchange for favorable coverage of him and his family.
He denies the charges and has lashed out at the media, police, prosecution and courts of forging a conspiracy to oust him. It comes after years of scandals swirling around the family.