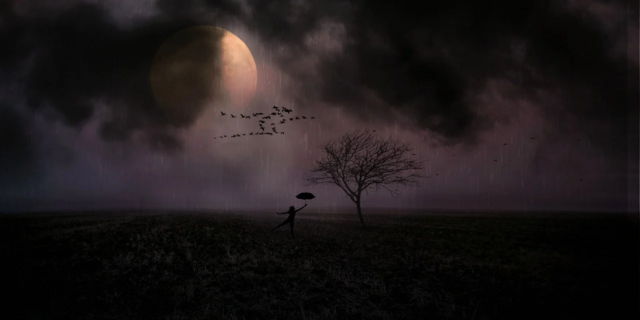 One of the Middle Ages mystery solved after nearly a millennium. In May 1110 the moon vanished from the sky, leaving people in the full dark for several consecutive months.

the Peterborough Chronicle wrote: “On the fifth night in the month of May appeared the Moon shining bright in the evening, and afterward by little and little its light diminished, so that, as soon as night came, it was so completely extinguished withal, that neither light, nor orb, nor anything at all of it was seen.”

Scientists at the University of Geneva, Switzerland, believe they may finally have the answer. Their study published in Nature magazine revealed that it was probably a combination of rare factors: vary cold weather, volcanic ash, and sulfur.

The study, focuses on the climatic effects of volcanic eruptions between 1108 and 1110 AD, claiming a volcanic eruption that occurred around mid-1108 on Mount Esma in Japan led to a large concentration of sulfur in the Earth’s atmosphere.

Around mid-1110 the concentrations began to decline, but again dipped towards the end of the year and continued until the first months of 1111. This compares with previous studies that attributed the increase of sulfur to the light volcano eruption in Iceland in 1104.

How is this all about the moon? Scientists have carefully studied the descriptions of the “black sky” documented from that time, and discovered that it was probably a long lunar eclipse hidden from the people of the earth. “The reports of the low brightness of the moon can be attributed to both the volcanic shrapnel in the stratosphere and the depth of vision of the stratosphere due to the large eruptions,” the researchers write.

The findings do not necessarily count as solid evidence for the hypotheses that have existed so far, although all reports from that period can be seen to be consistent with this assumption, and that all pieces of the puzzle work out in place. The study also offers a possible answer to the question of the range of effects of volcanic eruptions on atmospheric visibility, suggesting that this is a range of several months to a year.