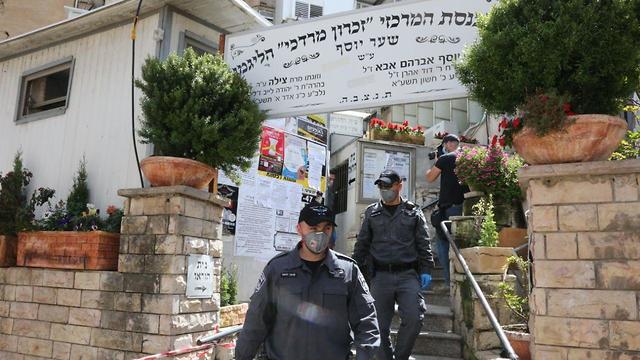 The government has decided overnight Sunday to impose partial lockdown on eight cities and 15 Jerusalem neighborhoods for a seven-day period as coronavirus keeps spreading through Israel.

The Haredi population has been hardest hit, both in Israel and around the world, as its traditionally insular way of life and heavy emphasis on community have created a perfect storm for the virus to spread.

The authorities fear that the desire to celebrate the Passover holiday will lead many in the community to ignore Health Ministry directives and gather in large numbers.

The lockdown is expected to be more lenient than the one in place in the ultra-Orthodox city of Bnei Brak and local leaders have already given their approval to the move, which is set to come into effect on Monday afternoon.

The special Knesset committee in charge of efforts to combat the epidemic has decided to include the predominantly Haredi cities of Elad, Beit Shemesh, the ultra-Orthodox settlement of Modi’in-Ilit, as well as Ashkelon, Tiberias, Beitar-Ilit, Or Yehuda, and Migdal HaEmek in the closure order.

Coronavirus hotspots in Jerusalem, which as of Sunday recorded 1,301cases, will also be put under a partial lockdown. Al least 15 neighborhoods in the capital, including Har Nof, Sanhedria, and Bayit VeGan, appear to be on list.

A senior health official told Ynet the lockdown imposed on what he described as “restricted areas” will be more lenient than the one in Bnei Brak, but law enforcement authorities will be vigilant in monitoring that the Health Ministry’s guidelines are observed.

Home Front Command will provide a constant supply of essential goods and medicine for the population in the restricted areas.
Efraim Shifri, a prominent figure in the capital’s Har Nof neighborhood, claimed that the area’s central status, which attracts many foreign travelers, is to blame for its high infection rates.

“Although our social distancing orders were even stricter than the Health Ministry regulations, there are many businesspeople and foreigners here,” he said. “Har Nof is like a central bus station, many travelers arriving from overseas have infected our residents in large numbers.”

Jerusalem Mayor Moshe Lion strictly opposed the lockdown of the capital’s ultra-Orthodox neighborhoods, in fear such a move may not be effective.

“Imposing a lockdown on ultra-Orthodox neighborhoods is not the solution. The ultra-Orthodox public has a high fertility rate and many families live in very crowded spaces, which makes it harder to isolate the sick from the rest of the population,” said Lion.
The government is also set to extend the lockdown on Bnei Brak for four additional days.

Health Minister Yaakov Litzman and Interior Minister Aryeh Deri were infuriated by the fact most of the communities set to be on lockdown were predominately ultra-Orthodox and asked to shift the criteria to the number of confirmed cases in the city rather than the rate of the spread.

In this article:Finance, Coronavirus, COVID-19