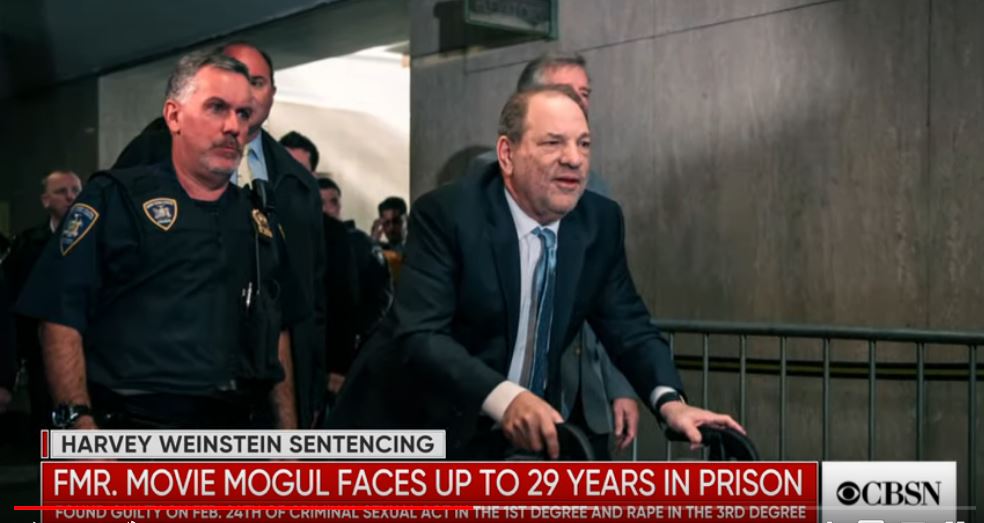 The disgraced Holywood movie producer Harvey Weinstein was sentenced to 23 years in prison Wednesday for sexual crimes in two women.

The producer was sentenced in the landmark #MeToo case in Manhattan criminal court, following sexual assault and rape conviction on Feb. 24.

Weinstein, 67, was sentenced to 20 years for forcibly performing oral sex on production assistant Mimi Haleyi, now 42 back in 2006.

He was sentenced to three years for third-degree rape for the attack in 2013 on Jessica Mann, now 34.

All six women testified during Weinstein’s trial in February.

Judge James Burke ordered Weinstein to serve the sentences consecutively and sentenced him to five years of post-release supervision for each charge.

The two women read statements in court. Haleyi said: “This incident with Harvey Weinstein altered the course of my life. I’m relieved that there are women out there who are safer because he’s not out there.”

She said that her life has been in shambles since deciding to come forward and exposing herself to scrutiny and feared Weinstein’s retaliation. “I had panic attacks and nightmares. I feared for my life.”
Mann was telling the judge she did not resist Weinstein. The man “had every advantage over me, given the immense physical stature of Harvey Weinstein’s height and weight and ox-like strength. My rape was preventable. He was a known offender.”

In his statement in court Weinstein said he had fond memories of his accusers. He insisted that any sexual activity was consensual and added: “I think men are confused about all of this. This feeling of thousands of men and women who are losing due process… I’m worried about this country.”

Weinstein faces charges in Los Angeles for alleged assaults on an Italian actress and Lauren Marie Young, 30.
In this article:Harvey Weinstein, Finance