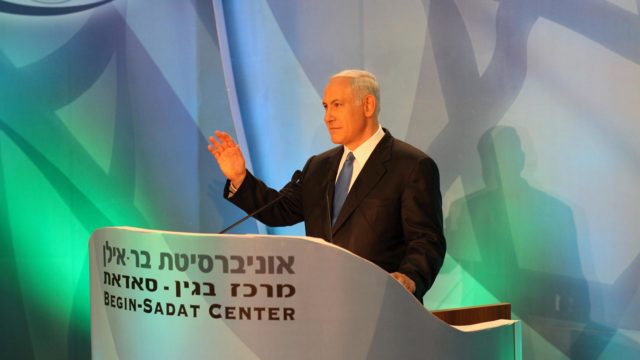 Few are the election slogans that have successfully burrowed themselves into the collective consciousness of the Israeli electorate, and even fewer are the ones that actually managed to translate that success into additional votes at the ballot.

And last week Prime Minister Benjamin Netanyahu launched his third campaign in the never-ending election saga by digging up an old slogan first coined by a comedian in the ’80s.

The “yes and no” catchphrase depicts its target as dishonest and indecisive. It is certainly well deserved by the Blue & White party that wants to have it all while committing to nothing, but as a general rule, recycled slogans tend to be less successful on their second outing.
“Yes and no” will probably not be the smash hit Netanyahu hopes for, given his own shifting positions over the years.

“Releasing terrorists is a shameful step that is nothing less than a surrender to terrorism. This is not the way to rally against terrorism, the opposite is true as it will surely encourage further acts of terrorism,” wrote Netanyahu in his 1993 book “A Place Among the Nations: Israel and the World.”

“The release of 1,000 terrorists into the West Bank will surely cause the area to escalate; these terrorists will be welcomed as heroes, with the results coming soon after.”

In the book, Netanyahu criticizes the 1985 Jibril Agreement, which saw Shimon Peres’ government exchange 1,150 security prisoners for three Israeli soldiers captured in the First Lebanon War by the Popular Front for the Liberation of Palestine – General Command (PFLP-GC) led by Ahmed Jibril.

In another of his books, “Fighting Terrorism: How Democracies Can Defeat the International Terrorist Network,” (which was released in English during his first term as prime minister) Netanyahu writes that not only should security prisoners not be released, there should be no negotiations with terrorist organizations whatsoever.

In October 2011, Prime Minister Netanyahu released 1,027 terrorists, some serving a life sentence, in a deal with Hamas to get abducted soldier Gilad Shalit back from Gaza after five years in captivity.

There is no doubt he wrestled with the decision before he made it, even more so with the immense public pressure to bring Shalit home.
Netanyahu deviates from the what he once spoke of, and the history he tries to write today.

In his first term in 1996, Netanyahu vehemently opposed the idea of a Palestinian state. In his second term, 13 years later, he was suddenly all for the two-state solution, saying in his famous 2009 Bar-Ilan speech: “We will be ready in a future peace agreement to reach a solution where a demilitarized Palestinian state exists alongside the Jewish state.“

Six years later, on the eve of the 2015 elections, Netanyahu proclaimed that should he be re-elected he would not allow a Palestinian state to be created.

He stuck to this line until now, when he announced his support for Donald Trump’s peace plan, which does call for a Palestinian state be created alongside Israel.

And what about the annexation of the Jordan Valley?

Well, Netanyahu says “yes” right now, but maybe it will become a “no” after the elections.