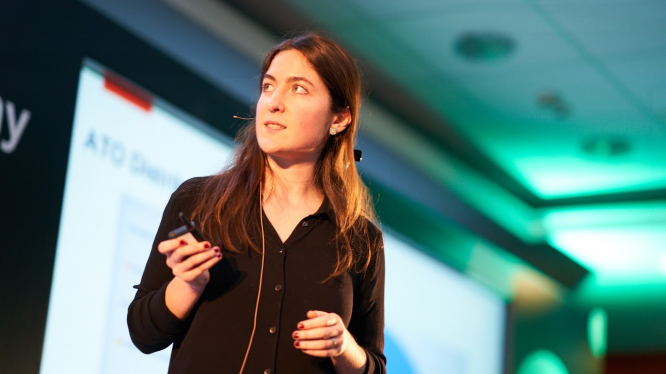 Ophir Harpaz, a cyber researcher at Guardicore has won the rising star award in the SC Magazine Reboot Leadership Awards 2019, in the field of information security.

The international prestigious award was given for unveiling organized attacks by hackers who have compromised computer systems around the world.

Ophir is specializing in financial malware and that she hunted banking trojans and analyzed their malicious payloads. “More specifically, she dealt with JavaScript code injected to banking web applications which were designed to steal both credentials and money from innocent end-users.” judges say.

The selection of Harpaz is particularly striking because of her young age, 28, and her relatively short two-year experience in cyber, during which she has already stood out from her long-standing and experienced professionals in the world.

The judging team noted the pivotal role she played in exposing cybercrimes and in collaborating with the entire information security community in the world through the measures they must take to clean up their systems and prevent similar attacks in the future.

Recently, Harpaz and the Guardicore research team revealed a number of hackers’ takeover of corporate servers for theft or use of digital currency mining. The exposures saved millions of dollars in damages to organizations. Harpaz has already attracted the attention of the global cyber community after it was announced by the Sentinel One website as one of the 21 recommended Twitter follow-ups among the world’s cyber people.

Emmanuel Benzaquen CEO of Checkmarx – “for his leadership his company through another record fiscal year last year, with more than 60 percent year-over-year revenue growth.”

Ben Seri of Armis Security for his “work in the IoT space specifically around BlueBorne, the first airborne IoT vulnerabilities impacting more than five billion devices globally, and BLEEDINGBIT, chip- level vulnerabilities used in the fabric of internet infrastructure.”

Erez Yalon, Head of Security Research Checkmarx “Erez Yalon has helped find vulnerabilities at wide range of websites. This includes Tinder where he found security flaws, and for discovering the widely publicized vulnerabilities in Alexa that would have allowed an attacker to use the device to spy on unsuspecting consumers.”