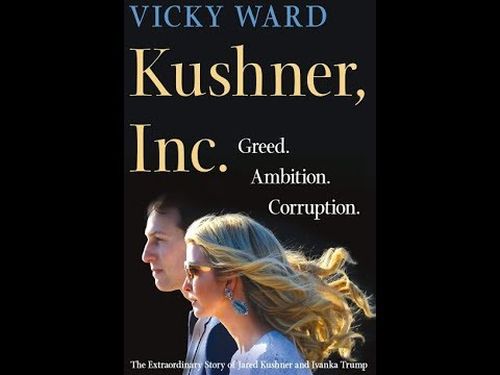 According to Ward, the self-styled Prince and Princess of America are lying, scamming and backstabbing their way through daddy’s Donald Trump’s White House.

Ward has said she interviewed 220 people for the book. She repeats stories we already know as: “She thinks she’s going to be president of the United States” and how Trump wished Ivanka had married Patriots quarterback Tom Brady instead (“Jared is half the size of Tom Brady’s forearm”), but also a story of Charles Kushner’s dealings with Trump including setting him up with a prostitute.

The book also features draft content of the peace plan for the Middle East in which Saudi Arabia plays a central role in Trump administration’s policy. According to these drafts three states exchanging territories. Jordan would give land to the Palestinian territories. In return, Jordan would get land from Saudi Arabia, and that country would get back two Red Sea islands it gave Egypt to administer in 1950. Kushner also wanted Saudi Arabia and the UAE to provide economic assistance to Palestine, including plans to build an oil pipeline from Saudi Arabia to Gaza Strip with the aim of establishing terminals and refining facilities  that will provide employment to the Palestinians, as well as desalination facilities.

The book claims that the Saudis did not like Barack Obama. Eventually, Obama disliked the oppressive regime in Saudi Arabia and openly said that Tehran and Riyadh should find a way to establish a “cold peace” between them.

Saudi Crown Prince Muhammad Bin Salman (MBS), according to Ward, even told former US Secretary of State John Kerry after the nuclear agreement with Iran was signed: “I just want to close my eyes, go to bed and wake up in January” (the date of the inauguration of the new president) Donald Trump).

A senior diplomat said MBS saw in Donald Trump a reflection of his personality. Moreover, he liked the new axis between Saudi Arabia, and the UAE to Israel. The book does not indicate that Israel should give up territory, but if there is one, probably that such a requirement exist.