Yesh Atid Chairman Yair Lapid will serve as foreign minister while Israel Resilience leader Benny Gantz serves as prime minister for the first two and a half years, and will be replaced by Lapid for the rest of the four-year term should their joint “Blue and White” list win enough Knesset seats to form a government after the elections, according to the agreement the two forged overnight Wednesday.

In addition, Gantz promised Lapid he would not join a Netanyahu-led government if the prime minister faces a hearing before indictment.

Former IDF chief Gabi Ashkenazi will join them, making him the third former IDF chief in the party, in addition to Gantz and to former defense minister Moshe Ya’alon.

“Realizing the importance of this national mission, Lt. Gen. (res.) Gabi Ashkenazi has decided to join the new list,” the new coalition said in a statement.

Before Gantz and Lapid officially sealed the deal, Ashkenazi tried to convince Moshe Kahlon’s Kulanu to join the Blue and White list, but his efforts were rejected by Kahlon.

According to Ashkenazi’s associates, he was involved in the negotiations between Lapid and Gantz over a substantial period of time.

“Over the past month, Ashkenazi intensively worked to make this union happen, making it a condition to his joining the Blue and White list,” one associate said. 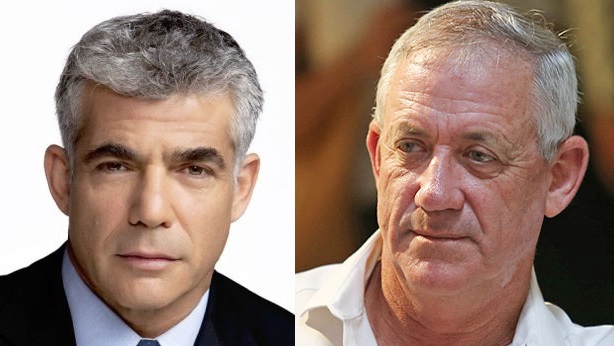 After burning the midnight oil to reach an understanding, Gantz and Lapid signed a rotation agreement early Thursday, announcing they will run together in the April 9 vote.

The Israel Resilience Party, in a statement, said Gantz, Lapid and Ya’alon, “decided to establish a joint list that will comprise the new Israeli ruling party.”

“The new ruling party will bring forth a cadre of defense and social leaders to ensure Israel’s security, reconnect to its people and heal the divides within Israeli society,” the statement from Israel Resilience said.

Against the backdrop of the center’s merger, the New Right Chairman Naftali Bennett called on Prime Minister Benjamin Netanyahu to form a wide right-wing bloc.

“In light of the union in the left, I urge Prime Minister Netanyahu to make an act of leadership and call on Moshe Feiglin’s Zehut, Moshe Kahlon’s Kulanu and Avigdor Liberman’s Yisrael Beytenu—three parties that currently fail to pass the electoral threshold—to merge into one bloc, ensuring not a single Knesset seat goes to waste,” Bennett said.

“The New Right is precluded from joining forces with other right-wing parties because we already submitted our Knesset list on Wednesday,” he said.