The student movement to urge university divestment from companies doing business with Israel is still active across the U.S., according to Amcha Initiative’s 2018 year-end report. The California-based watchdog group (amchainitiative.org) describes over 600 “anti-Semitic” statements, incidents, and events, including one in 2019. The majority were in support of the student-led Boycott, Divestment, Sanctions (BDS) movement.

Amcha co-founder Tammi Rossman-Benjamin is a former Hebrew instructor at University of California, Santa Cruz. The organization considers itself “non-partisan,” focusing on documenting, investigating, and combating anti-Semitism on campus.

The majority of the scenarios in the report were sponsored by Students for Justice in Palestine (SJP), an official student group active for more than 20 years on American college campuses.

The SJP and their supporters at Swarthmore College in Pennsylvania are calling for their college to divest from Lockheed, Elbit Systems, Boeing, Caterpillar, Hyundai, Bank Hapoalim, and Hewlett Packard, although they have yet to officially vote on BDS.

SJP also urged the Swarthmore administration last year to stop selling Sabra hummus on campus, but was unsuccessful. Swarthmore’s president and media relations staff were contacted for this article but did not respond. 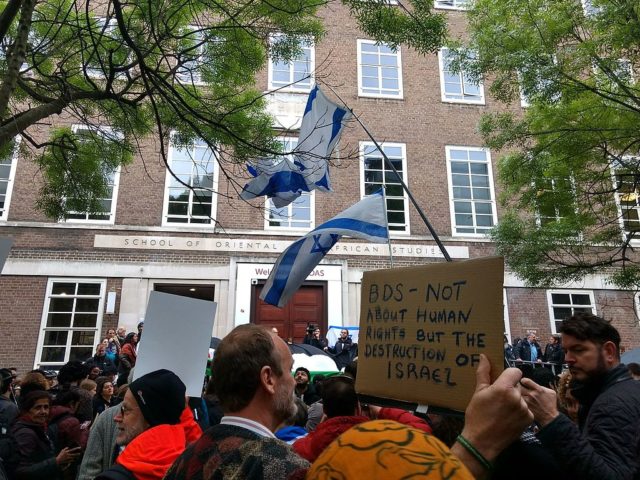 Several student and faculty groups expressed solidarity with the BDS movement in 2018, using terms like “settler-colonialism,” “apartheid state,” and “racist” to refer to Israeli political policies and treatment of Palestinians.

In January 2019, a coalition of about 75 student groups from the campuses of University of California petitioned the U.C. Regents with demands for “labor justice” for campus workers. They included a reference to the Palestinian cause.

“We the students of the University of California, in order to promote social and economic justice, demand that our U.C. system divest from companies complicit in the violation of Palestinian human rights.”

“I would say the group most consistently aligned with SJP on campus is the anti-Zionist, BDS-supporting Jewish Voice for Peace (JVP). Also, the Muslim Student Association (MSA),” Benjamin told JBN. ”However, many progressive groups, particularly those comprised of underrepresented minority students, have joined the SJP/BDS bandwagon,” she added.

When asked if a Jewish student uninterested in Israel or Jewish affairs could attend an American university in peace, Benjamin said they could. But she added that they may have more interest than they seem to. “Sadly many Jewish kids figure the price they must pay as a pro-Israel Jew on campus is just not worth it. So they shut down Jewishly. This a huge tragedy.”

Another example of SJP activity in 2018 involved a letter they sent to the School of Public Health at University of Illinois, Chicago, objecting to the hosting of Israeli speaker Dr. Maya Negev. Her topic was “environmental justice.” “We demand termination of ties between UIC and Israeli academic institutions,” it said.

Melvin Oliver, President of Pitzer College in Southern California objected to his school’s faculty motion in November 2018 to suspend the Study Abroad program with the University of Haifa. Oliver mentioned inconsistency with the school’s values and alienation of Jewish students.

Tammi Benjamin considers the Pitzer vote part of the Palestinian Campaign for the Academic and Cultural Boycott of Israel (PACBI). Amcha also reported swastika graffiti on campuses, vandalism of Jewish ritual items, and physical harassment and intimidation of Jewish students.

In this article:Finance, BDS Movement