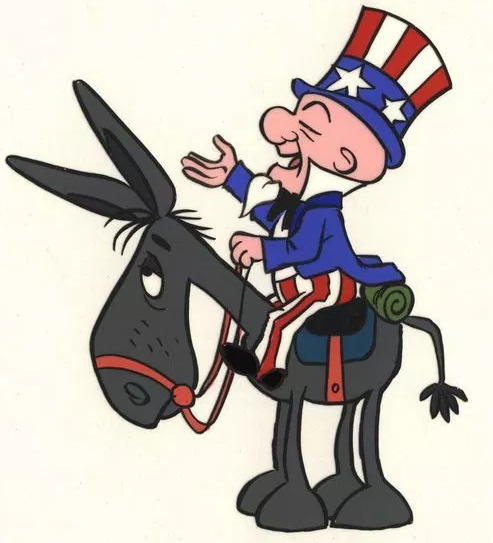 Hispanic clergy keeping quiet about Trump’s actions. We have to learn from history and not just make deals. Trump’s shutdown has just given Americans about five more Trump bankruptcies and he is Magi-cal when it comes to that.

As you know Dr. Martin Luther King has been the benchmark of great Christian leadership. Trump who has been called the “Real Magoo” (not Jeff Sessions) now has his Dr. Kings fighting for humanitarianism (Trump’s Way).

The M&M Boys include Pastor Darrell Scott (of course), WACO Pastor Ramiro Peña, and others. We have to ask ourselves if those pastors are the “Dios le bendiga” pastors that people know all to well or are they Dr. Kings fighting for justice and humanitarian efforts in the United States? Even Pastor Peña reveals that his pastoral mission has taught him about congregants that has helped him “see the suffering, the human suffering” of the people crossing the border.

I wonder what percentage of the funding those pastors are seeking to help now when we have always had a crisis here in the United States. And with Trump’s heart and soul in charge, they will have access to the funds. Dr. King must be turning over in his grave at this moment. Trump’s compassion is a limited liability type which has already been proven. See the study about Puerto Rico and Trump’s handing out aid there. And take a look at this video about people struggling to make it.

And now Trump has announced that he will take steps to institute school prayer, with the support of the M&M Boys who know perfectly well just how great prayer in the schools worked. It worked so well in the 1950s when I went to school that segregation and hate were contributing to much more hate in America. Those were the days when Jews were told that they could not work on Wall Street, when colleges were not for people of color at a time when the world was changing from working with their hands to working with their brains.

And now these “well respected” clergymen are supporting a man whose attended the Church of Stormy Daniels instead of the Church of Guadalupe. And I am not done. Are we going from a government shutdown to shut up about this government and all of its ills to have school prayer. Not on my watch!

I just got done reading about terrorism in Palestine and the author cited that David Ben Gurion compared Menachem Begin to Hitler. And today we have religious groups (Jewish groups also) that say do not compare Trump to Hitler. That effort is about issuing a wake-up call to people. And it all started with Trump’s own faith whose founding principle was not “turn the other cheek.”

Barack Obama appointed Adolfo Carrión, Jr. the head of the new Office of Urban Affairs in 2009 and Carrión’s father was an official in the Assemblies of God. About a minute or two of talk with the former borough president of the Bronx (the poorest count in the United States) resulted in my being given the Bronx Supreme Court Building’s Rotunda for my G.E.D. event. And Adolfo and I did not even know each other and nobody referred or recommended me. Was it some kind of spell that I cast on him that has to be cast on those Magi?

So what transpired in those two minutes with the former Bronx borough president? I told him how his great friend, a pastor and top assistant, had told me that his church helped 243 people earn their G.E.D. and I wanted to hold a G.E.D. Roundtable. In less than three days things developed quickly.

The Polish Prime Minister Mateusz Morawiecki has just made a profound statement about the Holocaust, particularly to address the German (not Nazi) nature of the Auschwitz-Birkenau Concentration Camp. True it was not a Polish Concentration Camp, but the point to be raised is that Hitler could have risen to power in other countries as well, especially in countries suffering great economic depression. So it’s a combination of the policies and ripe conditions that of great concern (anti-Semitism seems to flourish under all conditions),

A quick look at responsibility in the book 1946 is about the Pogrom of Kielce, which is not in Germany. Kielce was the worst of the anti-Jewish massacres of the Post World War II period. There were only 380 Jewish residents of Kielce when before Hitler there were 20,000. There were 130,000 residents of the town when the pogrom took place. Forty-two Jews were killed that day and eighty were badly injured. The scene was typical of what Jews had experienced under Hitler. And pogroms were not limited to Poland then.

There were all kinds of forces at play in the pogrom. And among those forces was the idea of Zydokomuna or Jewish Bolshevism as there were some Jews among the Communists who took over Poland and these Poles were not considered “real Poles.” The Catholic Church did not do anything to challenge this to prevent Blood Libels and other incidents.

The Bishop of Czestochowa, Teodor Kubina, was not one of those who conformed to the statements and actions of the vast majority in the Catholic Church. And Kubina was ostracized by others. Cardinal Hlond who did not make a statement against anti-Semitism when the British Ambassador Victor Cavendish Bentinck asked him to. It was felt that such a statement could weaken the support for the Catholic Church in Poland. But it was also strongly believed that the Church was anti-Semitic (but there were many important great deeds during the Holocaust by various archdiocese).
The Communist Party also took no action against this anti-Semitic act, adding to the political insanity of its time. There were 75,000 Polish Jews who survived the Holocaust and it was probably made perfectly clear that the Jews would be better off leaving the country. Jews left for German to live in Displaced Person camps.

And where were the American people during those days? Most Americans wanted to keep Jews out. Exceptions were made for certain Nazis as the world sought normalcy. But what kind of normalcy is there today. And what should the American people know about “highly respected church leaders around Donald Trump?

The National Hispanic Christian Leadership Conference and others have to show the steps that they have taken to help the Hispanic community and I mean secular steps and programs. In New York City even former graduates of Yeshivas are protesting the kind of secular education that they have received and the department of education is involved in investigations.

Here is the latest news about Samuel Rodriguez and the National Hispanic Christian Leadership Conference. My experience is that those churches (all or most of them) could have helped build a powerfully educated Hispanic community and they have failed, as they now seem to have failed those Hispanics who have been seeking asylum. This gift of Trump’s Magi.

Trump has created the national emergency and the NHCLC should have been on the ground from the beginning helping the people at the border. Suicides may have been prevented, families were unnecessarily separated, and those people needed powerful voices fighting for them. At this point, the NHCLC seems disqualified for leadership. I have nothing against the prayers that they have provided to Trump, but that’s where they belong unless they can prove otherwise to me.

Here is Trump talking to the Hispanic clergy recently talking about historic job numbers. When you watch this, you would assume that Trump took the Hispanic community down the football field to a 4 percent unemployment figure from 13 percent in 2009. When Trump took over the unemployment rate was 4.7 percent in the second quarter. So there was an 8 percent drop under Obama and the great play on the field was not at the goal line as Trump wants Hispanics to think. His drop was around 1 percent.

In July 2018 it was reported and later posted on the website of the NHCLC that churches in Texas was preparing a huge amount of resources to help the immigrants as required in the Bible (Baptist Convention and Catholic Church) and the NHCLC of Samuel Rodriguez was warning the immigrants not to come. That is the kind of talking that Trump must have been doing with the influential NHCLC. And check the handshake that goes with any deal, a deal that ignores all of the facts that Hispanics should know.

When the wall gets built pastors (just asking a question), do you think that desperate people will just return to their countries and walk back over a thousand miles or do you think that they will climb the wall? And breaking news about Trump’s Country Club shows that undocumented immigrants were fired and those immigrants are seeking protection from the U.S. Congress. I ask the NHCLC to protect those workers now, especially since the leadership knows Trump well. We need Magnificent Magi now!

Donald Trump has just started sending asylum seekers back to Mexico, where there is already hostility toward the immigrants involved in the caravan. We have seen that hostility on the news. This is not quite what happened to Jews who were in Displacement Camps in Germany, but it does suggest that the new American-Mexican agreement is potentially harmful to people seeking humanitarian help and we should learn from the mistakes of history. The Hispanic Christian churches should protest what is going on. Learn from Jewish history.
Never Again means much more than just another Holocaust against Jews.