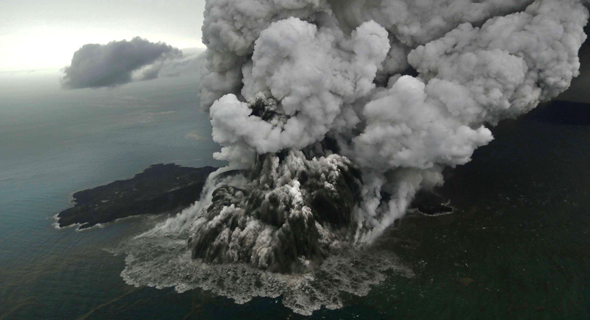 This week, the World Economic Forum (WEF), the annual meeting of leading world leaders and business leaders in Davos, Switzerland, will open.

This year there will be a shortage of prominent leaders, including US President Donald Trump, who canceled his participation due to the suspension of the administration, and British Prime Minister Theresa Mae, who is trying to resolve the impasse in the Berkazit talks.

Climate-related risks dominate this list for the third consecutive year, both in terms of their impact and the likelihood that they will occur. “The world is experiencing unprecedented heat waves, storms, and floods in 2018. The environment and weather dominate three of the top five risks, both in the list of plausibility. The failure to find solutions to climate change is second in the two lists and represents the growing fears of policy failure. “The consequences of lack of action on the climate are becoming clearer,” the report stresses.

Other concerns on the list relate to our growing dependence on technology, the state of the global economy, and social and geopolitical risks. Cyber attacks, for example, appear in both lists – fifth in the list of reasonableness and seventh in the list of effects – when data theft appears only in the likelihood list and reflects a more general trend in how technology affects the risk landscape.

Last year a number of cyber attacks were reported that affected the personal information of millions, if not billions, of people around the world. However, 82% of respondents believe that the number of cyber attacks leading to money theft and personal information will increase this year. “It reflects how new instability is caused by the deepening integration of digital technology in every aspect of everyday life,” the report said.

Another risk presented in the two lists relates to the water crisis and the lack of quality, clean water. At the same time, most respondents believe that there will be an increase in the risks associated with “economic conflicts between the superpowers” (91%) and “the erosion of laws and international trade agreements” (88%). In addition, the risk of a bubble of assets in a large economy is ranked tenth in the list of reasonableness.

The 10 most likely risks are:

5. Cyber attacks on a large scale.

6. Damage and man-made environmental disasters such as oil leaks, radioactivity leaks and so on.

8. Significant loss of biodiversity and collapse of ecosystems.

10. Bubbles assets in a large economy.

6. Significant loss of biodiversity and collapse of ecosystems.

7. Cyber attacks on a large scale.

8. Collapse and loss of information regarding infrastructures and networks.

9. Damage and man-made environmental disasters such as oil leaks, radioactive leaks and so on.

These risks are not isolated from each other, they are related to each other and each has the potential to influence others. For example, loss of biodiversity affects the food chain, which affects health and socioeconomic development.

10 biggest risks associated with each other:

6. Failure in regional or global administration + conflicts within countries with regional influences.

8. The collapse of a central financial institution or mechanism + a bubble of assets in a large economy.