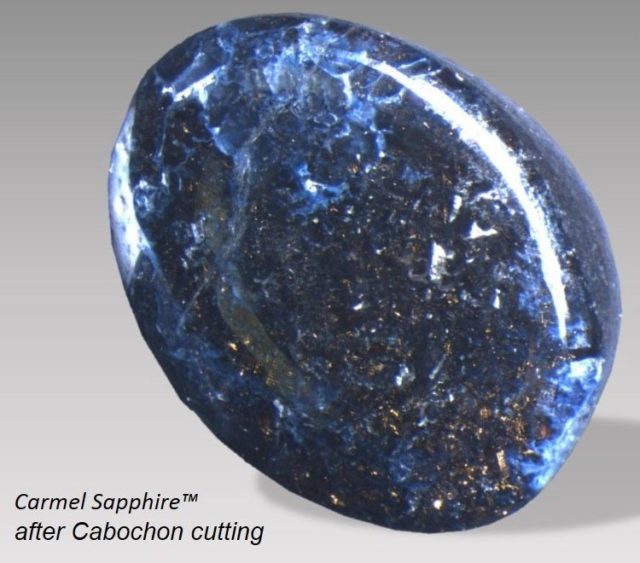 Carmeltazite which has a chemical composition previously only found in outer space was formed by the eruption of some rather puny volcanoes during the Cretaceous when dinosaurs were lords of the earth.

The gemstone-mining company, Shefa Yamim, that found it, dubbed the rare stones “Carmel Sapphires.”  The new ston was found embedded inside the sapphires with light and dark blue. The largest Carmel Sapphire found to date was a 33.3 carat stone. Its main components are titanium, aluminum, and zirconium.

According to a statement on the company’s website, Shefa Yamim began unearthing sapphire gemstones in volcanic rock in the area of the Kishon River in 2014.

Shefa Yamim (LSE: SEFA), is pleased to announce that carmeltazite, a mineral found in one of its gemstones, the Carmel Sapphire™, has been recognised and approved as a new mineral by the International Mineralogical Association (“IMA”) https://t.co/rbv9GBoKY5

Shefa Yamim CEO Avi Taub told Haaretz the outer space rock wind up in a valley of the Israeli Carmel mountain a quarter-billion years ago and earlier. back then there were no fewer than 14 volcanic vents along the crest of the Carmel, that’s how it happened. Over eons, the lava would have eroded and minerals within it would also have flowed down streams to the valleys spilling into the Mediterranean.