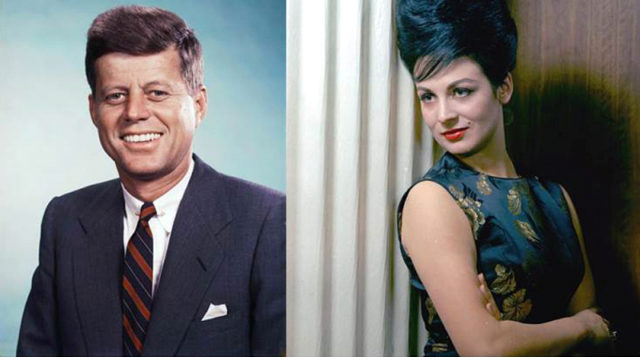 This dangerous moment in the United States can take us back to 1963 to understand how bad things can get, focusing on the fears and events in the last 100 days of John F. Kennedy.

The F.B.I. was on top of things that threatened the security of the United States and I am not referring to the “witch hunt” of that time. This was about men and women, prostitution. And a name came up that was very familiar to John F. Kennedy and his brother, Bobby. Among the women having sex with the men in the capital was Ellen Rometsch (there were two men who became presidents) who was previously escorted out of the country by the Kennedys. And she was bipartisan!

That national security crisis moment was about foreign espionage or a Russian investigation. Senators Mansfield and Dirksen were in a private meeting with Kennedy and J. Edgar Hoover and that resulted in containing the damage being done by the Bobby Baker sex scandal.

Kennedy had lunch the next day with Hoover as payment for his great work, something that JFK detested but he went through with it knowing that it saved his impeachment. He really wanted to get rid of the F.B.I. director. Sounds like Comey and Trump?

That lunch included Hoover passing a photo of that beautiful Ellen Rometsch across the table. One could only imagine the thoughts going through JFK’s head at that moment, especially about what Hoover would say next.

Keep in mind that Kennedy was going through this at a time when he pushing civil rights, trying to eliminate the Diem government in Vietnam (possibly by a coup), fighting his own people who felt he was “soft” on communism, trying to work things out with Fidel Castro so Cuba would not be in the communist sphere of influence, and much more. What a last hundred days and nothing was self-inflicted like a government shutdown.

In addition, it was widely known that Kennedy was a womanizer, even without a video discussing the groping of women seen by tens of millions of Americans. Kennedy’s concern was impeachment and not manipulating the public with a statement that it was a private matter between a man and his women and he had to protect his marriage. Jackie Kennedy was quite aware of the fact that her husband had a reputation.

Also at the moment, there were people worried for John F. Kennedy and warnings about his upcoming trip to Texas, including Dallas. Jackie had agreed to go which was something positive for her relationship with her husband. She had been depressed after the loss of their newborn son Patrick.

Adlai Stevenson had been confronted by Texans and gave a warning about the atmosphere there. Things were toxic. The United Nations was under attack and Stevenson was the U.S. ambassador to the U.N. Demonstrators were singing Dixie and Onward Christian Soldier to support their views.

General Edwin A. Walker who was removed by Kennedy was the catalyst. This moment was about Kennedy’s Catholicism, civil rights, government spending, fighting medicare, and the perceived weakness of Kennedy in foreign affairs. Conditions were ripe for something drastic to occur.

Yes, Trump is not safe under current conditions, but things were worse back then. There had been no assassination since William Mc Kinley and the secret service learned a lot about preventing an attack on the president, but Kennedy wanted to be with the people. It has been fifty-five years since Dallas.

Trump has been very well protected most of his adult life and he has built a wall of protection for his own personal security. The world he has lived in is not our world and the combination of his world and his base and our world of greater human values is just why I mentioned The War of the Two Worlds in my last article.

Trump has not declared that national emergency at the border at this moment. And, of course, Jared Kushner is getting some credit for talking Trump out of taking that course of action. This is the longest shutdown in our history and the small border crisis preceded it. What took Jared so long? What took Jared and Trump so long? Here is Senator John Tester speaking.

Kennedy was very concerned about a possible assassination. Trump is concerned about character assassination more than anything. And with good reason to be concerned. Although Trump just made a trip to Texas to address issues that are important to him, it is not written in concrete that his presidency will survive this year. The problem are those who are too blind to see. How anyone could swear loyalty to a man who is not dependable and exemplary (trump) should capture more imaginations.

There are Dallases, still, all over the United States. And there are people whose rhetoric have driven people in the wrong direction. Congressman Steve King of Iowa is from a town that is about 45 miles from the town that opposed integration and civil rights in 1963. Silver Lake is in a county that had only two African-Americans at that time.

The question to bear in mind is Where Have All the Racists Gone? Why does Steve King constantly say the things he says and why is it now that Republicans seem more inclined to censure him? And Jared and Ivanka Trump and Steve King, have they not stood together for two years? The Trumps and the Kings are supporting characters. And it will take more than a mere denunciation to make us safer in America.

And in conclusion and escaping all the confusion of Donald Trump, we can cite evidence. There has been no nuclear war since the Kennedy nuclear ban. Trump has nothing at all to show for himself even though he knows, likes, and is on good terms with Putin. Fifty-five years of keeping nuclear weapons in check and with that saving hundreds of millions of lives, which is precisely what we have learned that Trump’s advisors have done as the North Korean crisis was escalated by Trump and his fiery rhetoric, but still no agreement in sight.

What is better to you my fellow Americans, a couple of million jobs extra over two years or peace so that your children will not be annihilated? Kennedy did not want to get us deeply into the Vietnam War, but we fell for Johnson’s fake news. And in conservative areas of our nation, there has always been a call to bomb our enemies and wipe them out. Nonsense!

Kennedy achieved something enormous and never even got to enjoy it. The conservatives and right-wingers lost and Kennedy won. And there has been lots of fake news since 1963.

It is not easy to agree on accomplishments and around that time we had a major baseball disagreement that rocked our nation in 1961. Did Roger Maris break Babe Ruth’s home run record? It took an asterisk to calm everyone down since the season in 1961 was longer than that of 1927. There is only one more thing to say. Dump Trump!