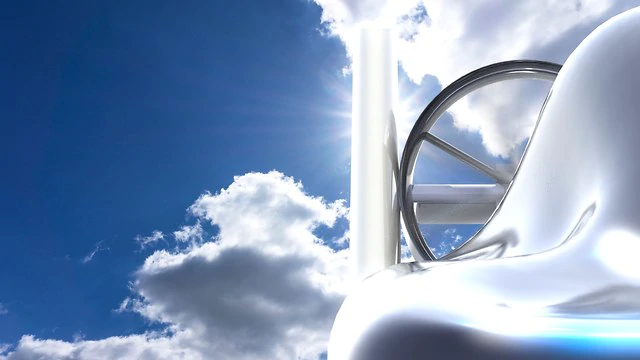 “Soon, we won’t only drive and move around on the ground, we’ll also use a flying car, which would enable us to land on roofs and in parking lots on the upper levels of buildings,” Guy Kaplinsky, the co-founder and Chairman of New Future Transportation (NFT ), tells Ynet in an exclusive interview, the first since the startup exited stealth mode.

“The need for change is obvious, due to the increasing congestion in large cities and the ever-increasing traffic problems,” Kaplinsky adds.

A flying car is the “Holy Grail” of the auto and aviation industries, the next revolution after the electric and self-driving car. According to an analysis done by Research and Market, the market reach of manned aerial vehicles based on electric engines is expected to reach $7 billion in 2028. Hoover, Airbus, and other big companies are working on their own projects in the field, using different technologies, some of which resemble large quadcopters, while others look like small airplanes.

Guy Kaplinsky’s concept is different: a real dual-use vehicle that can move both in the air and on the ground, the size of a family car with seats for 2-4 passengers, and with an electric propulsion and self-driving systems for driving and flying. It is a vehicle that would not need a special parking spot or a designated landing space. Best of all, it would allow anyone to quickly commute door-to-door from home to work and back again. The price tag would be slightly higher than that of a family car.

Prior to NFT, Kaplinsky founded IQP Corporation with Maki, his wife, and business partner, in 2013. The company developed a platform that enables companies to develop their own internet applications without the need for coding. IQP was headquartered in Japan with an R&D center in Israel and was sold in 2017 to General Electric for around $40 million.

NFT is seeking to raise $15 million in funding for their flying car project. The plan is to introduce the first prototype, which would showcase the aerodynamics, ignition and autonomic systems of the vehicle next year, and reach mass production in 2021-2022.

“In Japan, I worked a lot with the local auto industry,” Guy Kaplinsky explains. “I had already come up with the idea of a flying car then, but we were busy with our previous company. After moving to California and selling that company, now it’s the right time to develop the idea.”

You are competing with big companies with a lot of experience in aviation and massive budgets. What do you know that they don’t?

“Many companies in the market are developing a product called a flying car, but it is nothing more than a large quadocopter with 8-18 electric engines. We are working on a different product, which is indeed a flying car, but one that would be able to move on the ground, fly in the air and find a standard parking space at the end of the journey. Our advantages include highly experienced Israeli engineers who think out of the box, Israeli and Japanese engineers working together, special developments in the aerodynamic fields, which include the combination of a car and flight.”

To find the best engineering talent for the venture, Guy Kaplinsky recruited engineers from the Israel Aerospace Industries and from Elbit Systems, including those with FAA certification experience and graduates from Stanford and other Ivy League universities. The company is based in Mountain View in the Silicon Valley and is set to open an office in Netanya.

Guy Kaplinsky won’t reveal the full configuration of the vehicle NFT is building just yet, but he says the strategy is to create a flying vehicle that would be as accessible as possible in terms of its price, rather than being not a “toy” for the rich.

“We are building a Toyota Corolla, not a Ferrari. This vehicle will be driven by propellers, it will be a hybrid and later on completely electric. The goal is to build a vehicle that would allow the users to travel a distance of up to 200 km and reach a large city in less than an hour, door-to-door. It will not be an aerial taxi, like some of the other companies are planning, but a vehicle for personal use,” he explains.

To overcome the need for a flying permit, the company plans a vehicle that would be able to fly autonomously while its user would only need to set the destination. “The user will only have to press a button and the vehicle will take off. The aviation authorities already allow unmanned aerial vehicles to fly autonomously in civil flight routes, although it has not yet been approved for a manned vehicle,” says Kaplinsky. “Large companies are already working on a control system for flying cars, for the new aerial traffic.”

Meanwhile, Guy Kaplinsky is also building a future supplier base: “We have a strategic partner, a senior European supplier from the auto industry, and we are in process of signing with Japanese suppliers. They also understand that flying cars are something that is going to happen and want to be part of this new field. We want to work with suppliers from the auto industry because they are experts in producing quality components that are not as expensive. Therefore, we will be using ‘off-the-shelf’ components. The serial production will be carried out through an existing auto manufacturer and we are already in talks with several.”