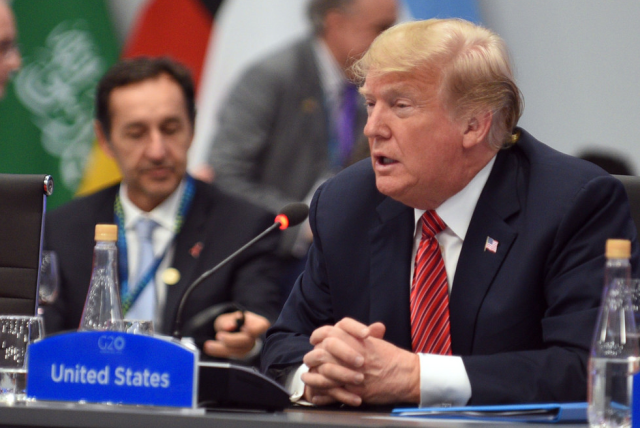 “I shall not seek, and I will not accept, the nomination of my party for another term as your President.” Yes this is a fact.

It was amazing for me to take notice of photos of Donald Trump at the G20 Economic Summit in Buenos Aires, Argentina.

Consider that Trump got involved in promoting professional wrestling with the boss of wresting Vince MacMahon and that involvement included physical promotion before thousands of fans. Trump walked past his tag team partner Vladimir Putin as though he was unhappy about how things were turning out. And the two showed no cordiality as they have before and finally something appears to have gone wrong.

The Chicago Tribune has provided us with lots of information about Trump, including photos taken at the G20 Economic Summit. Take note of Trump’s comments about the great relationship that he had with the father of President Mauricio Macri of Argentina. There was a bankruptcy of $1 billion connected with his purchase of property in New York in 1985. As you would imagine with everything going on in the Russian investigation, it would natural now to think about what was going on with Trump and the Argentine president’s father. If more develops from that, Trump has shot himself and others in the foot again.
It is the time to honor Trump by placing his likeness on the $3 bill. There is no three-dollar bill, of course. And it would be fraudulent to represent it as real money.

More on not seeking another term from the New York Times. Now is time to take that announcement seriously. Trump is failing us. A great part of the problem is that people do not spend the time needed to know things and that is dangerous in a democracy, as it has always been. More and more people are waking up to Trump’s fatal flaws which align well with dictators of the past and with other American presidents, especially Lyndon B. Johnson who could lie with the best.

In today’s news we find that coal plants in Illinois (mined coal) is polluting the ground water. What is this administration doing about that right now? With the earthquake in Alaska and the damage to oil and gas production, the economy is faltering more and more. Tax cuts alone that hardly get the job done cannot make this country great. Constituents have to be assured and they have to look out for others in states that they hardly know or care to know. Democracy is in danger.

Let me go a step further and not hold back. The head of a Jewish organization that I spoke to a couple of years ago was most concerned about the budget of the state of Illinois and of course he blamed Chicago’s teacher’s union for the pensions that affected the tax payers. His comments also attacked a famous NFL football player, Colin Kaepernick. I am not implying any prejudice here against African-Americans, but would your choice be if you had to decide between fighting to honor the American flag when it is peacetime or to fight for people having clean water or air. I can remember when it was Israel’s big concern to make sure that the water was not poisoned.

We also see that large layoffs are taking place around our nation, due to bankruptcies and automakers moving out. With those losses, there will follow other losses that Trump should be able to prevent if he is so great and amazing. Of course, that would lead to even greater national debt and inflation, slowing down the economy even more. Sears and General Motors are just two companies having those contractions, but there will be many more. The smoke and mirrors concept that I recently had on the phone will shatter Americans even more than they were in 2016.

We have to conclude this exercise which I hope is not an exercise in futility. People on the right and the left are confused and holding steady to their views. Jews are included in this mess. The days of communists battling fascists seem to be gone. The days of American ideals battling communist ideals appear to be over, but people around the world know KGB-Putin and we know a great deal about Trump, fast becoming a business associate of Putin as an under the table deal is being investigated. And that will be accepted by the American people as Trump himself asked why shouldn’t we get along better with Russia? I didn’t fall for that line.

Here is the conclusion and action that is now needed. Take a look at this link, but read the article which will reveal to you how people in power constantly commit crimes and try to act otherwise. Trump should resign. He was never presidential material in the first place.

All Jews and Israelis are about the find out just how one of the legends of football has been duped by anti-Semites (Goyim Defense League and the use of a fifty years old attack on the USS Liberty where 34 people were killed). The word must have been sent out to Jew haters around the world as Brett Favre was paid $500 to make the video. The donation of the $500 is far from enough, very far. That fee and its impact are toxic just as groundwater is toxic from coal plants. Let’s us work together to enlighten and not to poison people’s minds.

I am neither a Walter Conkite nor an Emile Zolá, but if I had my choice of being one of them it would be Zolá, fighting for reason and justice. And remember the passion of Zolá fighting for a Jew and the divisive climate in France, even among Jews.