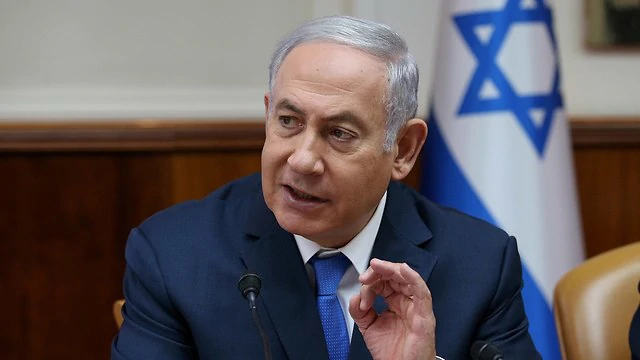 Netanyahu expressed concerned on a recent CNN poll that found disturbing attitudes in Europe towards Jews.

“I’m concerned, because I think anti-Semitism is an ancient disease and when it rears its ugly head, it first attacks the Jews, but it never stops with that, and then it sweeps entire societies, as happened obviously in mid-century Europe,” Netanyahu said. “First in Germany and then throughout all of Europe and the consequences were horrible.”

He also expressed concern by the fact a third of Europeans in the poll said they knew just a little or nothing at all about the Holocaust.

The prime minister did take heart from the fact European leaders were taking steps to combat anti-Semitism.

“I spoke to (German Chancellor) Merkel, (French President) Macron, (British Prime Minister) May and others—they’re putting up a fight,” he said. “I’m seeing this in Eastern Europe. I saw Viktor Orban in Hungary—he’s opened up a center against anti-Semitism. I saw Sebastian Kurz in Austria—he just held a conference against anti-Semitism, and that’s encouraging.”

When asked about Israel’s good relations with countries like Poland and Hungary, despite the raging anti-Semitism there, Netanyahu explained that “There are old tendencies that have to be fought, they keep coming back. I’d describe anti-Semitism as like a chronic disease. It can be fatal if you don’t challenge it, and it can be contained and reduced if you do. That’s what I expect governments and leaders to do, and most of them actually do it.”

What about those leaders who both use that anti-Semitic imagery and are strong friends of Israel?

“I don’t think they do,” the prime minister argued.

“I think ultimately the real issue is, can we tolerate the idea that people say that Israel doesn’t have a right to exist, which I think is the ultimate anti-Semitic statement,” Netanyahu said.

“The majority of the Jewish people are very soon going to be living in Israel. There are over six million Jews now living in Israel. So the new anti-Semites say this: ‘We’re not against Jews, we’re just against the State of Israel.’ That’s like I would say ‘I’m not against French people, I just don’t think there should be France. France shouldn’t exist.’ And so anti-Semitism and anti-Zionism, anti-Israeli polices—the idea that the Jewish people don’t have the right for a state, that’s the ultimate anti-Semitism of today.”

In this article:Holocaust, Antisemitism, Finance, anti-semitic