A gunman stormed a Pittsburgh synagogue during Saturday services and shot worshipers, killing 11 and wounding six others, including four police officers, before he was arrested. None of the dead were children.

The gunman, reportedly a bearded heavy-set white male, yelled “All Jews must die” before opening fire, killing worshipers on the ground and basement floor using an AR-15 rifle and two handguns.

The gunman, who was pinned down by SWAT teams, eventually surrendered himself to the police, crawling to them due to his injuries.

Police spokesman Chris Togneri says police have no more information at this time because they are still trying to clear the building and figure out if any more threats exist.

The Conservative Jewish community convened on Saturday morning at the synagogue to celebrate a brit milah that started at 9:45 am.

The Tree of Life synagogue is located on the intersection of Wilkins and Shady avenues at the heavily Jewish populated Squirrel Hill neighborhood, some 10 minutes from downtown Pittsburgh. It describes itself on its website as a traditional, progressive and egalitarian congregation. 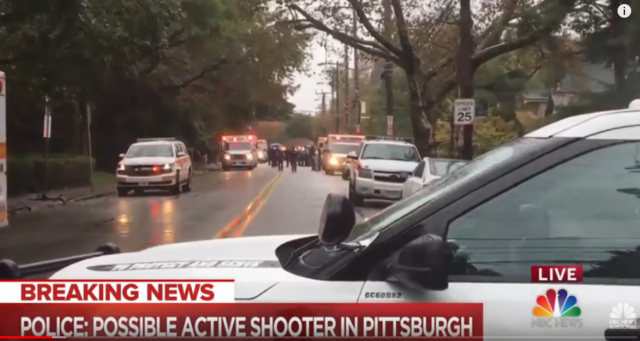 The synagogue is a fortress-like concrete building, its facade punctuated by rows of swirling, modernistic stained-glass windows illustrating the story of creation, the acceptance of God’s law, the “life cycle” and “how human-beings should care for the earth and one another,” according to its website. Among its treasures is a “Holocaust Torah,” rescued from Czechoslovakia.

Pittsburgh Mayor Bill Peduto said all residents of the neighborhood are required to stay inside their homes until further notice.

Jeff Finkelstein of the Jewish Federation of Greater Pittsburgh told WPXI that organization’s security officer has notified all JCC synagogues and that they are on modified lockdown.

Finkelstein said local synagogues have done “lots of training on things like active shooters, and we’ve looked at hardening facilities as much as possible.”

Michael Eisenberg, former president of the synagogue, told KDKA that police were normally only present at the synagogue for security on the High Holy Days.

“On a day like today, the door is open, it’s a religious service, you can walk in and out,” he said.

“We must all pray and hope for no more loss of life,” Wolf said. “But we have been saying ‘this one is too many’ for far too long. Dangerous weapons are putting our citizens in harm’s way.”

The Pittsburgh Steelers and the Pittsburgh Penguins said in separate statements on their Twitter pages that their “thoughts and prayers” are with all those affected by the shooting.

Israel mourns shooting, offers assistance
Upon learning of the shooting, Minister Naftali Bennett said he was “following the news with concern” and has instructed the Ministry of Diaspora Affairs, which he leads, to prepare to assist the community in every possible way.

“Our hearts go out to the families of those killed and injured. May the memory of the murdered be blessed,” he added.

President Reuven Rivlin also expressed sorrow at the horrible tragedy.“Our thoughts and prayers are with those affected by the events in Pittsburgh, Pennsylvania,” he said.

“I am sure that the law enforcement agencies and the legal authorities in the US will investigate this horrific event thoroughly and that justice will be served on the despicable murderer,” he concluded.

We are shocked by the heinous attack on the Tree of Life synagogue in Pittsburgh’s Squirrel Hill. There are no words to fully convey our horror and sadness at the murder of Jewish people who were worshipping with their community on Shabbat. This is a nightmare for Jewish people across the United States and around the world, and for our country.

Our thoughts are with all of the victims and their families, and with the courageous law enforcement officers who rushed to the scene and subdued the shooter. According to the most recent reports, at least eight people have been killed and others wounded. Four officers were reportedly wounded in the line of duty.

Our hearts are with the Jewish community in Pittsburgh. We’re sending you love and strength.

“There are no words to express how devastated we are by the events in Pittsburgh this morning. This loss is our loss, and our thoughts are with Tree of Life Congregation, our local partner Jewish Family and Community Services (JFCS) of Pittsburgh, the city of Pittsburgh and all those affected by this senseless act of violence. As we try to process this horrifying tragedy, we pray that the American Jewish community and the country can find healing.”

“Our hearts break for the families of those killed and injured at the Tree of Life Synagogue, and for the entire Jewish community of Pittsburgh. This is likely the deadliest attack on the Jewish community in the history of the United States. We are actively engaged with law enforcement to support their investigation and call on authorities to investigate this as a hate crime.

Hindu statesman Rajan Zed, in Nevada said: We are deeply saddened by this horrific tragedy.  Our hearts go out to the victims and their loved ones and the entire Jewish community. Targeting of innocent people at the sacred worship place is abhorrent.

It was a senseless and shocking act of violence.

Ynet News. Reuters and the Associated Press contributed to this report.