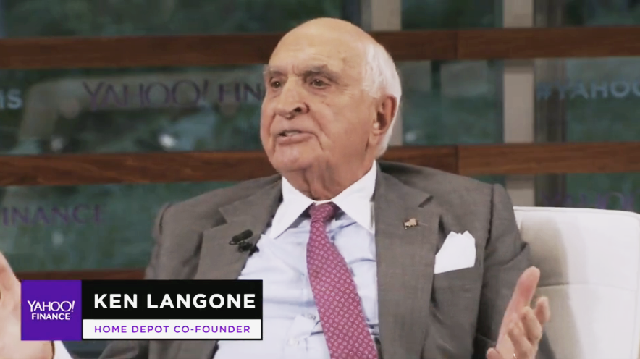 About Trump: “I think he has accomplished more in two years than the last five idiots in the last 30 years,” Ken Langone said at Yahoo Finance‘s All-Markets Summit in New York.

What a difference one letter makes? Ken Langone is one of the owners of Home Depot which is very close to my home.

See and hear him speak at the Yahoo Finance’s All Market Summit. How could Yahoo release his interview with Julia Laroche?
Ken Langone to me has had a pretty fine record. He has donated over $200 million to NYU Medical School, but in his interview he has detonated things that you should know about. Let me explain to you why I feel that the doctors at Langone Medical should put Langone in an isolation unit.

Keep in mind that in the 1970s Vietnamese boat people with no drinking water were brought into Israel by Menachem Begin. Israel made them all citizens. No there is no mistake in the last sentence. Read again!

First he wants to be known as the man whose foundation is to say a kind word, make a thoughtful gesture, and encourage people to show passion and enthusiasm. All good things, right? See for yourself!

Then he goes on to tear apart the McCain opposition group calling them Kumbaya people acting divisive. The song was first used to appeal to God to come to help people. Oh forgot, help people in need. I can imagine Rudy Giuliani and others in the White House saying great job Ken just as they did the same to the campaign debates of a floundering, unprepared Donald Trump.
Remember Joan Baez singing Kumbaya? It’s far from my favorite song, but conservatives should like the song. Oh forgot that she sings No more wars my lord, Kumbaya.

Ken Langone gave Yahoo about seven minutes of an economics interview. Ken Langone, just like Donald Trump, went off on a tangent and lost his way for seven minutes. Here is Joan Baez talking about Donald Trump and crew and their lack of empathy. They have money from people like Langone, but they lack empathy. Baez is partly right about the Trump Hitler comparison and this is what Langone should learn. I can remember the forefather of most of our mistakes explain on television that Joan Baez, other like her, and yours truly are merely “do gooders” who should not be part of what is called the neoliberal revolution that can only help people. Do gooders are well meaning, according to definition, but unrealistic. And it was Milton Friedman who made those comments.

Langone you see calls Trump the fever, not the disease. And this is from a man who has donated so much to the medical field and humans. Would some doctor at N.Y.U. please tell Langone that there are often “fevers” that are detected in the hospital that are life threatening and those “fevers” have to be knocked out in order for the patient to survive. Trump is a fever that is threatening our nation and the free world.

Langone is Roman Catholic and he has an immigrant daughter-in-law that he says he loves very much, an immigrant from Vietnam. In my search for Langone Helps Vietnamese Community, I came up with nothing. I know that Texans (a Ku Klux Klan rally where two boats were burned) discriminated against Vietnamese immigrants there, but it seems to me that his daughter-in-law has not been victimized in this way. Could it be that Langone is just content with the fact that his son loves the woman and no more? Where is his compassion for that?

He spells out his resentment for workers in the federal government where money is “pissed out” and he points out the benefit of government shutdowns because of that. But Langone is not paying those workers. Overpayments to business are not the result of government employees except where there are bribes and shady deals, but the vast majority of workers are not involved in that.
Langone is correct in saying that Trump is not the disease, because our country, he says, got divided way back in the Vietnam Era. He talks about Newt Gingrich and others that he was involved with. Don’t blame Trump he says and he goes on to criticize the most progressive elements that shout no ice, no borders, no police, etc. He compared licensing to enforcement and feels that we have been divided too long. He did not answer the question. He waves the Trump flag when he says people could go to Venezuela, typical of almost all conservatives who never say the positive things that we know about socialism in Europe. So Venezuela is the poster boy for socialism.

This is what Langone and Joan Baez must learn. Digging for the answer why the Holocaust against the Jews, it really was not the great dissatisfaction against the Jews that caused the Holocaust. The National Socialists were less than 3 percent of the voters. And there were issues, the loss during World War I. The Great Depression moved people to the Nazi party and soon those people became more anti-Semitic due to one thing. Hitler. No orange hair. No Hitler Tower. And no Ted Cruz or Jeb Bush. The Trump base does include that element and more. Langone is wrong.

.@HomeDepot co-founder Ken Langone: “Obama ought to do what every great president did. Go off in the sunset. Be the mother of the groom. Wear beige and keep your mouth shut. Okay?” @BarackObama pic.twitter.com/GcFUob9s4K

Langone stands solidly with Trump whose support is like the granite of New York City? Langone is from an Italian-American working-class family from Long Island. All of us stand with good people and reject those who are not good. Even when Jews were “illegal” in Italy, Jews went bathing at a lake, bicycling around communities that protected them, and generally lived humane existences until the middle of World War II. Yes, It Happened in Italy and should happen here as well. And those Jews came from all over Europe, not just Italy. Can Ken Langone be Ken Begone?

There is one other thing on my mind right now and it is one word. Lowe’s.

In my article on Beto O’Rourke in Jewish Business News, I did not share something about an old Beto O’Rourke Tucker Carlson interview on Fox. This is a good example of what is going on in discussions. Beto O’Rourke held his own as he discussed the Dreamers. Of course Carlson maintains that they are illegal. During the interview this was one major mistake made by Carlson. He brought up the fact that high school students in Texas are not college ready (citing that only 39 percent are ready) and he felt that this was more important than going to bat for the Dreamers. Even O’Rourke missed this important point. School performance is a state matter and immigration reform is a federal matter. So that is not even Beto O’Rourke’s job as congressman. People like Carlson and Langone will throw in anything to make a point which becomes pointless.
Langone wants to protect his money (taxes).

Langone does not seem to be interested in immigrants except if they are in his family.

He does sound like a combination of Bernie Sanders and Trump to me and there is more about Langone.
He is connected with the Harlem Children’s Zone and the Promise Academy in New York City. Those charter schools were never set up fairly. Geoffrey Canada broke the rules for admission and the charter schools are nothing more than students from different schools coming to a new school. I told The Manhattan Institute’s Charles Sahm that the proof of the greatness of a charter school is to take over an entire school (even a failing one to prove its greatness). What has happened since with this man who liked the idea? I have been calling the Manhattan Institute since I read the report by Jay Greene in which he wrote that the GED is no better than no high school diploma at all in the job market place. I told Greene that someone has to be on the bottom and you would not expect people who have only a GED to be doctors and lawyers. Who gave the money to find out that someone has to be on the bottom? Not Langone. Right it was Bill Gates, the same Bill Gates that someone told me (at a White House event many years) that Gates is not smart and many people who heard him speak felt the same way.

Have you seen my latest about Lebron James? He has a so-called second-grade school in Akron, Ohio. No first-grade school, no third-grade school, no fourth-grade school, etc. No school really, but they call it a school. Don’t you think that if the class went online, knowing what we know and what I told my readers, and fifty thousand second graders signed up for his class, I mean school, the success rate would incredible, even making the Promise Academy look bad. They love Lebron. His poster is on their wall at home. Mom and dad see a great improvement. Maybe we should put everyone in our nation in the second-grade school including charter school children. And at the end of the school year, the second graders could go to the George Carlin third grade….I did not type that. How did it get in here? I mean the Lebron James third grade school and first graders everywhere could go to the second-grade school.