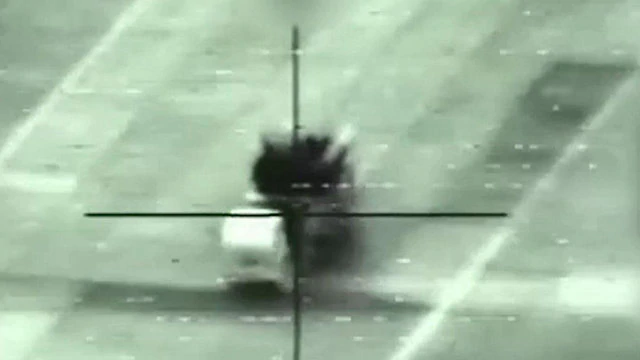 The IDF revealed on Tuesday that as of the beginning of 2017, more than 200 Iranian or pro-Iranian targets were attacked across Syria.

An entire system of pilots, officers, analysts, and officials has been working around the clock to execute the strikes.

The attacks included the dropping of 800 bombs and missiles by the Israeli Air Force—an amount that adds up to half used in a “real” war. Some were launched to long ranges. In almost all such operations that are meant to take place under the radar, all participants know very quickly or even in real time whose fist gave the punch, hundreds of kilometers from Israel.

And so, one of the purposes of these inter-war attacks is to send a message of power through the Middle Eastern arena, alongside establishing Israeli deterrence, postponing the next war and preventing Israel’s enemies from arming themselves with advanced weapons.

Behind heavy secrecy, that was lifted yesterday, the IDF has been trying to eradicate Iranian presence in Syria even at the cost of an incident that could trigger a war on the northern border. This agenda is led by Chief of Staff Lt. Gen. Gadi Eisenkot who was the commander of the northern border in years when Hezbollah was growing stronger.

According to the IDF, the Iranian plan to establish its presence in Syria was discovered two years ago by intelligence officials. Back then, the Russian blitz on the rebels was strengthening Assad, and in Tehran, leaders were already looking forward to what is to come after the war.

The Islamic Revolutionary Guards concocted a multi-year plan to establish military naval and air bases in Syria. These bases were supposed to include, according to the IDF, thousands of soldiers and local Shiite militias serving as an army to fight against the “Zionist enemy.”

The “Yamanite model” of this plan, which is already enabling the launching of missiles to Riyadh, is proving successful for the Iranians. They have an old-fashioned army, but also advanced technologies and intelligence capabilities, alongside drones and an ambitious missile program.

The IDF’s recommendation for government officials was clear—to eradicate any Iranian move in the Syrian arena, without claiming responsibility. Secrecy had been maintained until February of this year. Then, circumstances led to the surfacing of this covert confrontation, when an Iranian drone penetrated Israel and was shot down above Bik’at HaYarden by an Apache helicopter.

The IDF then openly attacked the T-4 base in the Tadmor region in Syria from which the drone was launched. Shortly after an Israeli F-16 was shot down over the Galilee by Syrian antiaircraft missiles.

The confrontation between Israel and Iran became public, violent, and dangerous, reaching its highest point of intensity three months later during Operation House of Cards when more than 50 Iranian targets were destroyed in Syria.

Israel’s “excuse” for this vast operation—its largest operation executed in Syria since 1974—was the launching of 32 rockets at the northern Golan Heights, most of which falling in Syrian territory and several being intercepted by the Iron Dome system.

However, it was a brief lull, and ever since then, Tehran has been galloping through Syrian territory while attempting to dodge Israeli intelligence.

In addition, it was reported Tuesday night that fighter jets had bombed targets around Wadi al-Uyun in the Hama area in Syria. Syrian media attributed the bombardment to Israel.

The IDF has a reason to be pleased regardless of its efforts against Iran. US forces have been pushing Iranians out of the 55 kilometer strip along the Syrian-Iraqi border around the Euphrates river. They are also more vigorously active against Iranian moves in the region.

However, Russia is competing with Tehran over reconstruction contracts for war-torn Syria, and have thus pushed Iranian forces to at least 80 kilometers from the Israeli border.

According to the IDF, it is “executing these operations a few times a week, also throughout Cyber tools. The Iranians understand that they have poor infrastructures and an intelligence gap. Our response to their entrenchment in Syria has come a year to a year and a half earlier than they had planned”.

“Still”, the IDF report read, “Iraq is more important to Iran then Syria, since 64 percent of the Iraqi population is Shiite, and they are thus organizing more militias there.”

In this article:Finance, Israel - Iran, Israel-Syria