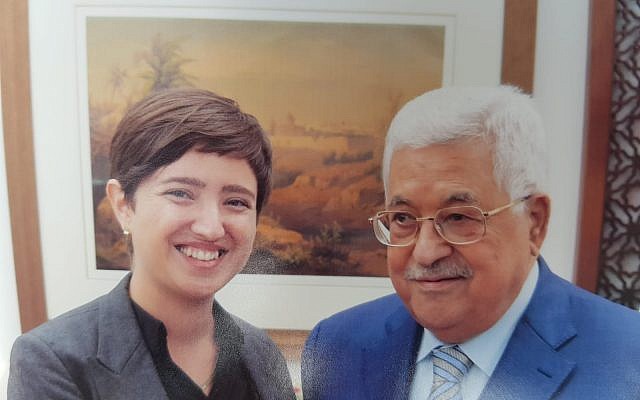 Palestinian Authority (PA) President Mahmoud Abbas said on Sunday he is interested in a tripartite confederation with Jordan and Israel, according to Peace Now group.

In a meeting held with the left-wing peace advocates and Israeli Knesset members, Abbas claimed that a US negotiating delegation Jared Kushner and Jason Greenblatt, of which he met on Sunday in Ramallah, recommended a peace plan that was based on a confederation with Jordan.

According to the Palestinian President, he told President Donald Trump’s peace envoys that he would agree to such an arrangement on the provision that Israel would also be part of the confederation. It appears that Abbas is ready to depart from his longstanding insistence on a two-state solution,

During the meeting, Abbas said that Trump’s two special Mideast advisors Jason Greenblatt and Jared Kushner ”asked me if I believe in a federation with Jordan.”

“I told him: yes. I want a triangular confederation with Jordan and Israel. I asked if the Israelis would agree to that proposal,” Abbas wondered.

The delegation which included the Peace Now Chairwoman Shaked Morag and MKs Mossi Raz (Meretz) and Ksenia Svetlova (Zionist Union), have heard Abbas claiming that he “consistently meets with the heads of the Shin Bet—we agree on 99 percent of the issues.”

“I have a problem with Netanyahu, not with Likud,” he added.

The 83-year-old leader also shared his belief that Trump administration was a hostile force against the Palestinians and “is closing the peace process. The US wants to destroy UNRWA completely.”

Trump announced on Friday he would stop to provide any financial aid to the United Nations Relief and Works Agency (UNRWA). The aid organization which the US and Israel have accused of deliberately bloating the number of bona fide Palestinian refugees.

The Palestinian president, whose relations were soured with the US particularly after Trump announced his recognition of Jerusalem as Israel’s capital last December, claimed that 70 percent of Gaza’s residents are refugees.

“Most of them live on UNRWA’s assistance. Then President Trump says ‘cancel UNRWA and give humanitarian aid to Gaza.’ How is it possible to abolish UNRWA on the one hand and Palestinians be given humanitarian aid on the other,” he asked.

Abbas also reiterated and emphasized that the palestinian security apparatus “maintain daily security coordination with the Israeli defense establishment” and that its personnel “do everything possible so that no Israeli is harmed.”

He also insisted that he supports security for Israel and for finding a solution to the Palestinian refugee problem.

Abbas blamed Israel for what he said was the country’s refusal to negotiate with the Palestinians, despite the fact that the Russians attempted on two occasions to bring the two parties together, as did the Japanese, the Dutch and the Belgians.