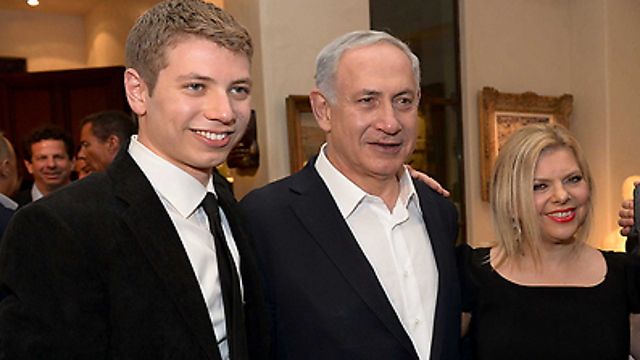 Prime Minister Benjamin Netanyahu’s son, Yair, is being treated as a suspect in the Walla-Bezeq corruption affair, according to news reports aired on Israeli television on Thursday evening.

The reports came shortly after it was reported that the prime minister’s wife, Sara Netanyahu, is also a suspect in the investigation which is pat of a string of corruption cases involving the Israeli leader and his family.

The investigation, also known as Case 4000, involves suspicions that Bezeq majority shareholder Shaul Elovitch and Prime Minister Netanyahu had a quid pro quo relationship in which Bezeq enjoyed regulatory benefits in return for favorable coverage of the Netanyahu family on Walla! News, which is owned by the telecommunications giant.

According to the report, Sara and Yair Netanyahu carried out illicit acts together with Prime Minister Netanyahu.

One news reporter said that the case was similar to a bank robbery.

“Two people go to rob a bank. One of them stay outside, the other shoots in all directions in the branch and takes the money. The two of them are, at the end of the day, if caught, suspects in the robbery. Even though one sat outside, didn’t touch the money and didn’t hold a gun,” the reporter said.

“They were his arm when they exerted pressure, according to the police, on Iris Elovitch and on Ilan (Walla! News website CEO) Ilan Yeshua in order to turn the site into a site for the interests of the Netanyahu family,” he continued.

A representative of the Netanyahu family responded to the report derissively.

“We actually managed to find positive coverage of our dog Kaya on Walla. She is lucky that she passed on before she too managed to become a suspect of bribery,” the statement quipped.

“There is no limit to the absurd and in any cases. Walla’s coverage of the prime minister has been and remains consistently negative.”

A discussion at the Tel Aviv Magistrate’s Court concerned the question of the forfeiture of Bezeq majority shareholder Shaul Elovitch’s assets.

A police superintendent said that Elovitch’s wife, Iris, and Sara Netanyahu knew the financial implications of their actions.

Superintendent Uri Kaner explained his conclusions in the discussion when asked by Iris Elovitch’s attorney if Sara Netanyahu knew that in exchange for sympathetic coverage, government benefits would be given to Bezeq.

The lawyer, Rosen Ozer, claimed that the state is discriminating between Iris Elovitch, whose property was seized by the police, and Mrs. Netanyahu. “None of Mrs. Netanyahu’s assets have been seized,” the defense attorney reportedly complained.

Kaner added that other people had still not been investigated in the case, but it was unclear whether he was referring to suspects or witnesses.

A representative of the State Attorney’s Office, Nitzan Wilko, said that the investigation is being satisfactorily conducted, forecasting that the case would be transferred to her office within half a year.

Mrs. Netanyahu’s defense attorney issued a statement in response. “What is new about this absurd ‘suspicion’? So the police said it. These things never happened,” the statement said.

Earlier this month, investigative police arrived at the prime minister’s official residence to begin another round of questioning of the Israeli premier in the affair.

It was expected to be the final time that police officers question the prime minister at his residence on Balfour Street in Jerusalem as investigative teams begin wrapping up the case and assembling the final details.

A statement released following the round of questioning on Netanyahu’s behalf said that he never received positive media coverage from Walla! News, which provided solid proof that the case is crumbling.