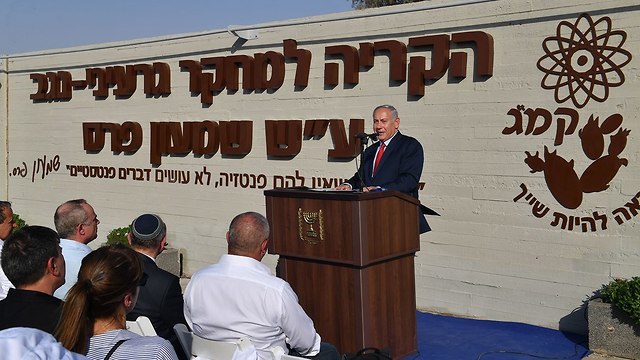 Prime Minister Benjamin Netanyahu visited the Negev Nuclear Research Center near Dimona on Wednesday and warned the country’s enemies that Israel has the means to destroy them, in what appeared to be a veiled reference to the country’s assumed nuclear arsenal.

“Those who threaten to wipe us out, put themselves in a similar danger, and in any event will not achieve their goal,” the prime minister said during a ceremony to rename the nuclear research center after the late Israeli statesman Shimon Peres. “Our enemies know very well what Israel is capable of, they know our policy, and anyone who tries to harm us—we will harm them,” Netanyahu added.

The prime minister stressed the necessity for Israel to stand strong in the face of its enemies: “In the Middle East, and in many parts of the world, there is a simple truth: there is no place for the weak. The weak are collapsing, slaughtered, erased from history; and the strong, for better or for worse, are the ones who survive. The strong are respected, the strong enter into alliances, and ultimately the strong make peace.”

Netanyahu also referred to the agreement between Iran and Syria saying,”the IDF will continue acting with full determination and with full might against Iran’s attempts to station forces and advanced weapons systems in Syria, and no agreement between Syria and Iran will deter us, nor will any threat frighten us.”

“We are working to prevent Iran’s military buildup in Syria. We will not let go of this goal, just as we did not let go of the effort to bring about the cancellation of the nuclear agreement with Iran, which was perceived as impossible when I first placed it on the international agenda a few years ago,” he added.

Israel has carried out scores of attacks against suspected Iranian and Hezbollah emplacements or arms transfers in Syria, while Russia, Damascus’s big-power backer, has turned a blind eye.

The prime minister credited the Peres, his predecessor and a Nobel Peace laureate, with setting up the nuclear reactor in the 1950’s as part of a vision of “normalization between core countries in the Arab world and the State of Israe.l”

“On the political level, we will continue to apply pressure against the dangerous and extremist regime in Iran. Only yesterday we saw the fruits of this pressure in the words of the Iranian president, who said that many Iranians have lost faith in Iran’s future and its strength because of the renewed economic sanctions,” he added.

The prime minister also discussed the deepening relations with the moderate Arab states: “The process of normalization of major Arab countries with the strong State of Israel is happening before our very eyes, on a scale that would have been impossible to imagine just a few years ago; a process that will hopefully result in peace. But it is impossible to deny the fact that there remain many enemies in this region and beyond.

“I am not merely using empty slogans, I am describing a consistent, clear and determined policy. This is our strategy and it is backed up with appropriate preparation and ready for the moment an order is issued,” Netanyahu concluded.

In this article:Iran, Finance, Syria