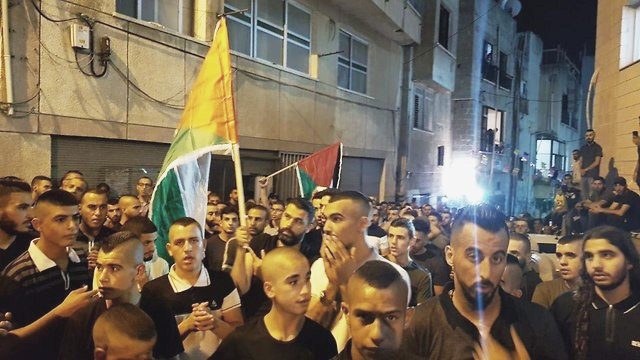 Defense Minister Avigdor Lieberman said on Tuesday that the Arab-Israeli city Umm al-Fahm, had to be “part of Palestine”, in what was a rare acknowledgment of a future Palestinian state that would include land swaps by the right-wing Yisrael Beytenu leader.

Speaking at a press conference after viewing a military exercise in the Golan Heights, Lieberman addressed events that took place in the city located 20 kilometres northwest of Jenin in the Haifa District of Israel during the funeral of Ahmad Muhammad Mahamid from Umm al-Fahm, who on Friday attempted to stab a policeman in Jerusalem before being shot dead.

“You ask yourselves why Umm al-Fahm should be part of Palestine and not Israel? The sight of hundreds of people participating in the funeral of a terrorist with a Palestinian flag, and calling for ‘in spirit and blood we redeem the martyr’ gives you a final answer to the question,” Lieberman said.

“The plan which I publicized many years ago for territorial and population swaps is more relevant than ever,” he said.

Police announced on Tuesday morning that an investigation will be launched into suspected violations of terms imposed on Mahamid’s funeral, after 1,500 people marched through the streets with his casket waving Palestinian flags and chanting: ‘In spirit and blood we redeem the martyr.”

Turning to the shooting from the Gaza Strip on Monday at IDF soldiers, Lieberman insisted that it is not possible to completely prevent attacks carried out by terrorists unaffiliated with any particular organization.

“The shooting incident yesterday involved a single person who was not connected to anyone and it is not possible to completely prevent a terror attack carried out by a lone attacker like this. (The same is true regarding) incendiary balloons,” Lieberman said.

Noting that the media’s attention was still fixed on events in the south, Lieberman pointed out that Israel was also making preparations for a two-front conflict that would include its northern frontier.

“We are following all the changes and events in Syria, including in Lebanon. The wise thing to do is to be prepared on both fronts all the time, both in the south and in the north,” the defense minister said, noting that the media’s attention was still fixed on the south.

“I see in the media ‘there has been a balloon in the south.’ They say ‘yes there were balloons, but it’s balloons only, not an incendiary balloon.’ There is no doubt that there is a decrease in the number of incidents but it’s not enough. Therefore what is important is to create an absolute connection between security calm and economic benefits,” Lieberman argued. “The facts on the ground are without doubt that there is a dramatic decrease in the number of incidents.”

Lieberman also acknowledged indirect talks were underway between Israel and the Hamas terror group via Egypt, the UN and other international leaders.

“From my point of view, the only arrangement is the situation in the field. If the general arrangement is to be achieved, the precondition is an arrangement regarding the POWs and MIAs,” he said, in reference to Hamas’s holding of two civilians and two fallen IDF soldiers.

“At the moment, we are operating unilaterally according to the reality on the ground, and this is likely how it will continue,” he added