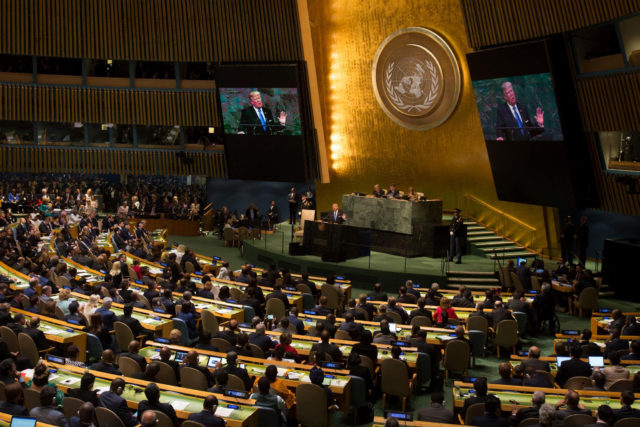 The Foreign Ministry and the Israeli delegation to the United Nations are preparing to thwart a Palestinian move aimed at suspending or permanently removing Israel from the UN in light of its controversial Nation-State Law.

The Palestinians will argue that Israel disregards UN Security Council resolutions, defies the Charter of the United Nations, and encourages apartheid through the Nation-State Law.

Israeli officials say the Palestinians are taking similar steps to those taken against South Africa during the Apartheid era. South Africa was then suspended from the UN and was not a member for several years.

To temporarily suspend or permanently remove Israel from the UN, the Palestinians need the consent of two-thirds of the votes in the General Assembly (GA) and an additional nine votes of UN Security Council’s members, including its five permanent members—the United States, Russia, China, Britain, and France.

The Palestinians can also try to revoke Israel’s right to vote in the GA.

However the Palestinians’ chances of obtaining the consent of all Security Council permanent members are slim, and in any case, the US will veto the move.

Nevertheless, they have a good chance of passing the resolution in the General Assembly, since they have an automatic Muslim majority there.

If the Palestinian resolution passes, it would be an unprecedented victory of Palestinian propaganda and diplomacy.

Israel’s ambassador to the UN, Danny Danon, is working with US Ambassador Nikki Haley and several other countries to torpedo the Palestinian initiative. “This is a cynical attempt by the Palestinians to spread lies from the UN stage,” Danon said.