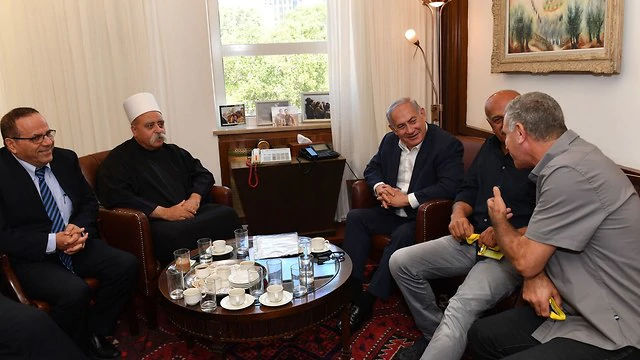 The authors of the Nationality Law were so busy thinking about their political base that they failed to realize who they were running over on the way. Like a driver who has had one too many drinks, they didn’t have a clue how to drive on the road. But outside of this narrow circle, everyone gets it. The law removes all those who do not belong to the tribe from the Israeli core. It turns the Druze community in Israel from friends into an embittered population. It says to Bedouin, Christians, Muslims, to Arab newscaster Lucy Aharish you have no part in life here. At best, you are leftovers.

It is outrageous in every single respect—morally, historically and practically. The reality in Israel was far from being perfect even before the ratification of the law, but there is a difference between complex reality, being open to struggle, being open to changes and a Basic Law that is supposed to be a central element in the constitution. The tribe has spoken. It is tired of being responsible for the state. It wants to return to tribal laws.

The question of “what are we” has accompanied the State of Israel since its founding. Its founding fathers spoke about a Hebrew state—a Hebrew language, Hebrew work, Hebrew military, a Hebrew post office. The word “Hebrew” connected them to the biblical period while deliberately skipping two thousand Jewish years in exile. There were those who suggested calling for a new state of “Judea” or for “the State of the Jews.” It is no coincidence that Ben Gurion chose a broader name which contains more—Israel.

The choice allows, among other things, for Druze officers in the army to speak in Israel’s name and to feel completely at home. For them, the people of Israel are for the people who physically live in Israel, not for Jews who live in the diaspora. The people of Israel are, for them, their soldiers, the civilians they are called upon to defend, the military in which they serve. This is what they thought, this is what they believed until the Nationality Law passed. It would be appropriate for IDF Chief of Staff Gadi Eisenkot to say something now about the Druze place in the IDF. He is permitted to.

Their identity cards are Israeli, their nationality is Israeli. Israeliness is the common denominator apart of which everybody who lives in Israel can live.

This Israeliness should have been something that the state nurtured as a matter of policy, by allocating resources, in education and in culture. Israeliness to Israelis like being French for French or being American for Americans. Instead, the state nurtures tribalism.

There is Israeliness in only one place in the country—in the hospitals. There, amid the suffering and the helplessness of the patients, the lines of division between tribes become blurred. There is a and an Arab and a Jewish doctor. There are Arab nurses and Jewish nurses. There are Arab patients and Jewish patients.

The persistent erosion of Israeliness is our biggest failure, a searing failure. The Nationality Law turns this failure into ideology. “Israel”, said Arab Joint List MK Ahmad Tibi, “is a Jewish and democratic state: Democratic for Jews, and Jewish for Arabs.” This is a witty statement, without doubt, but not updated. Israel of today is less democratic for Jews. These things are already well known and there is no need to repeat them here.

Israel today has relations with a string of governments in Europe, whose past is anti-Semitic and their present is stained with racism. It is impervious to the religious needs of most Jews in the second largest Jewish community in the world. It is also impervious to the religious preferences of the majority of Jews living in Israel. These are not the values that a Jewish state can be praised for. The state is Jewish in one sense only: it is not an Arab state. That is the significance and meaning of a Jewish state in the eyes of those who support the law. Remove the Arabs from the questions, and the phrase “Jewish state” is erased immediately. There will be no need for it.

On the conclusion of Shabbat there will be a demonstration in Rabin Square against the law. The harm to the Druze will be the anchor but the scope will be wider and will include an array of protests against the damage to values of equality, including the exclusion of the LGBT community. Netanyahu called yesterday on his colleagues to stop apologizing for the Nationality Law. The polls he is reading seem to convince him that the protest is weak and fragmented. The protest can be broken. We have to prove to him that he is wrong. When the scale of values is overturned, there is no escape from going to the square, not only for the sake of our Druze brothers but also for all Israelis and for Israeliness.