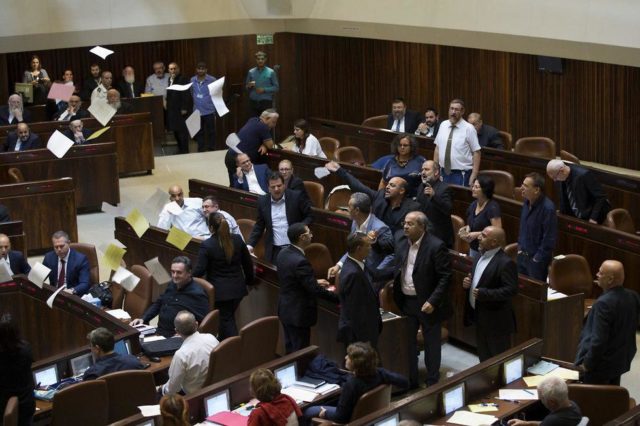 Israel passed the nationality bill into law on Thursday to declare that only Jews have the right of self-determination in the country, something which Prime Minister Benjamin Netanyahu hailed as the realization of Zionism’s vision but which has stoked anger among critics who argue it is racist.

“One-hundred-and-twenty-two years after Herzl published his vision, we’ve enshrined into the law the basic principle of our existence,” Netanyahu said. about the law, which was backed by the right-wing government in a stormy Knesset debate by a vote of 62-55.

Knesset members Benny Begin (Likud) and Orly Levy-Abekasis abstained in the 120-member Knesset after months of political argument, while Arab lawmakers, who say the law is racist and verges on a codification of apratheid, shouted and ripped up papers after the vote, prompting Knesset Speaker Yuli Edelstein to remove the Arab MKs from the plenum. 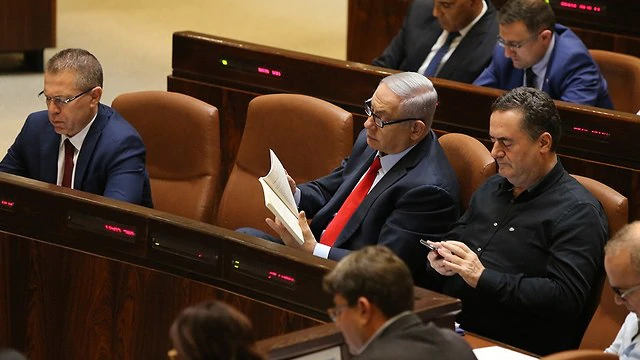 “This is a defining moment in the annals of Zionism and the history of the state of Israel,” Netanyahu told the Knesset after the vote.

Israel, Netanyahu said during the pandemonium that erupted in the Knesset Plenum, is the only country in the Middle East that honors equal rights.

“Israel is the nation state of the Jewish people that honors the rights of all its citizens … When I make speeches around the world, I reiterate this is our country, the country of the Jewish nation,” he stated, explaining the reasons for the law.

“Over the past few years some attempt to question that and by doing so they question the foundations of our existence. This is the reason why we enshrined into a law this is our anthem, our language and our flag. Long live the State of Israel,” he declared from the podium.

Largely symbolic, the law was enacted just after the 70th anniversary of the birth of the state of Israel. It stipulates that “Israel is the historic homeland of the Jewish people and they have an exclusive right to national self-determination in it”.

The bill also strips Arabic of its designation as an official language alongside Hebrew, downgrading it to a “special status” that enables its continued use within Israeli institutions.

Israel’s Arabs number some 1.8 million, about 20 percent of the 9 million population. 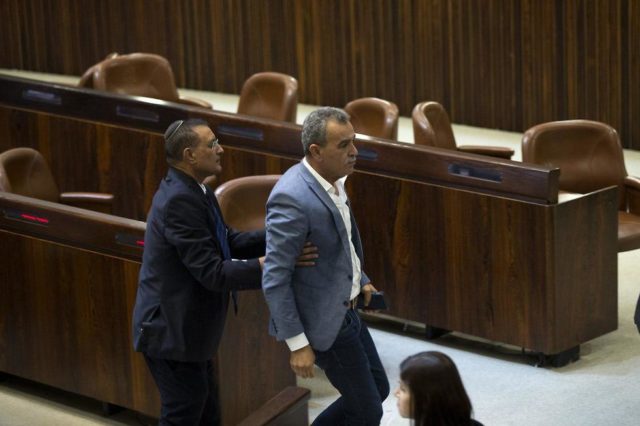 Early drafts of the legislation went further in what critics at home and abroad saw as discrimination towards Israel’s Arabs.

Clauses that were dropped in last-minute political wrangling—and after objections by Israel’s president and attorney general—would have enshrined in law the establishment of Jewish-only communities, and instructed courts to rule according to Jewish ritual law when there were no relevant legal precedents.

Instead, a more vaguely-worded version was approved, which says: “The state views the development of Jewish settlement as a national value and will act to encourage and promote its establishment.”

Even after the changes, critics said the new law will deepen a sense of alienation within the Arab minority.

“I announce with shock and sorrow the death of democracy,” Ahmed Tibi, an Arab lawmaker, told reporters.

Tourism Minister Yariv Levin, one of the sponsors of the bill, also spoke during the plenary session after the bill’s passage into law. “This is a historic and defining moment, The nationality law strengthens the identity and heritage and all the values for which Israel exists,” he said.

Turning to the MKs from the Zionist Union camp who opposed the law, Levin posed a series of questions. 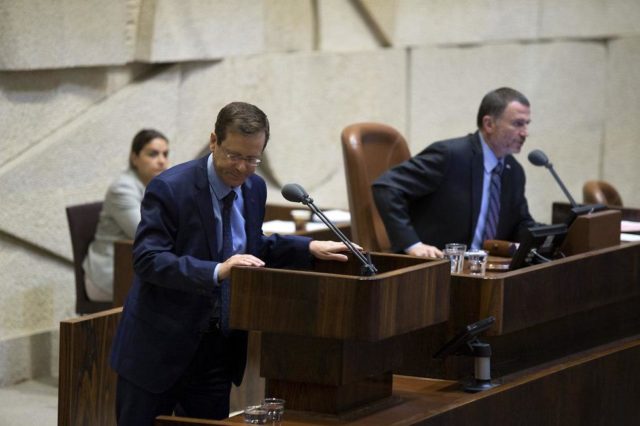 MK Avi Dichter (Likud), who also sponsored the bill, explained his reasons passing the law. “We are enshrining this important bill into a law today to prevent even the slightest thought, let alone attempt, to transform Israel to a country of all its citizen,” he said.

“When I listened attentively to the Joint List MKs, it was impossible to miss their clear words: ‘We, the Arabs will win, we are in our homeland, we were here before you and we’ll be here after you.’ This Basic Law is the clear-cut answer to those who think that and it is clear: You were not here before us and you will not be here after us,” he responded.

MK Amir Ohana (Likud), who headed the Knesset Joint Committee of the nationality bill also said that the vote marked a “defining moment” in Israel’s history.

“We don’t have 21 national nation-states like the Arab nation. This is a historic Basic Law that for the first time explicitly consolidates the different components of the State of Israel’s character. As the nation-state of the Jewish people,” he said.

Zionist Union leader Tzipi Livni argued that the intention of the bill was not to define Israel as the nation-state of the Jewish people, but rather to benefit Netanyahu.

“When I asked MKs from the coalition why they can’t accept a law that 100 MKs can agree on, they answered that Netanyahu wants the bill in order to fight. ‘Otherwise how will people know he is more of a nationalist than you. What will he get from that,’” she said. 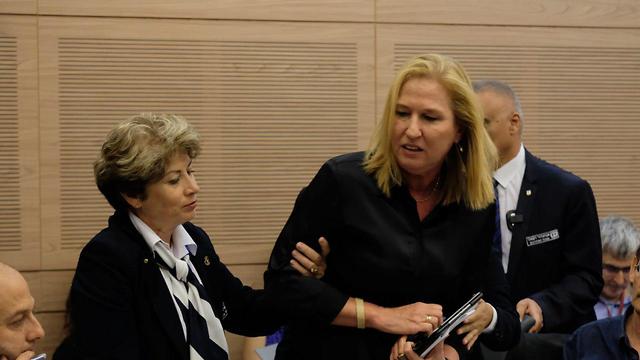 MK Benny Begin stressed that he would not lend a hand to the bill led by his Likud party, saying that “This is not the decision I expected the Likud leadership to take.

“Seven years ago my original proposal gained a lot of support. However, times have changed and denying the statement which commits to uphold equal civil rights is considered today as one that does not stands against the Likud’s symbol as a liberal national party,” he said.

“We’ve learned those two concepts are inseparable. Therefore, both of them should be expressed. Nationalism which does not preserve human rights deteriorates into violence. Beware my friends of this detachment.”

Netanyahu has defended the law. “We will keep ensuring civil rights in Israel’s democracy but the majority also has rights and the majority decides,” he said last week.

“An absolute majority wants to ensure our state’s Jewish character for generations to come.”

Arabs who remained in Israel after the 1948 War of Independence have full equal rights under the law but say they face constant discrimination, citing inferior services and unfair allocations for education, health and housing.

Adalah, the Legal Center for Arab Minority Rights in Israel, called the law a bid to advance “ethnic superiority by promoting racist policies”.

In this article:Finance, Zionism, Israeli Knesset