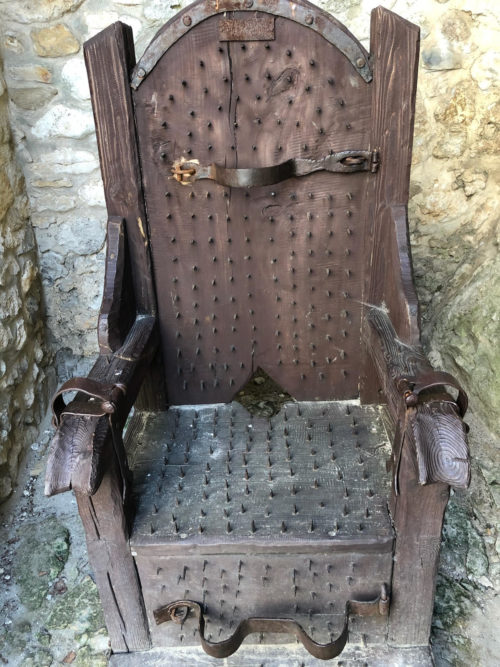 I found Trump’s Throne in Bobolice Castle in Poland this year. As you can see it has its own built-in massage machine and there is a warming drawer that could be used by the special counsel to bring out the truth about Trump’s dealings with Russia. And once Trump is put into the chair, he will stay there a long time telling us the truth about Stormy Daniels and the money from Russians. Please do not sit in the throne. Warning. The warming drawer gets very, very hot. It is reserved for Trump only. It is time for Trump to confess. And you know just how much Trump loves torture!

There was a choice in the 1930s when the Star-Spangled Banner won out over America the Beautiful. Now it is clear to a lot of people that the national anthem should be strangled and become The Star-Strangled Banner. Things can be changed as the world awaits changes by the Supreme Court of the United States. Just as segregation in our nation’s schools was overturned in 1954, there are some things that may be on the chopping block. Let’s look at America the Beautiful for a minute, but not before I mention Kate Smith and God Bless America. Irving Berlin (a Jew) wrote the song, but there are lyrics just like the lyrics in the Star-Spangled Banner that we never heard Kate Smith or anyone else sing.

Two Boston police officers just sang the song in their police car and it went viral, but without the kind of reporting by Fox News that you see here. Why not ask the African-American police officer and her partner who they feel after learning more about the lyrics? That would be great news!

While the storm clouds gather far across the sea
let us swear allegiance to a land that’s free
Let us all be grateful to a land so fair, as we
raise our voices in a solemn prayer
Other songs by Irving Berlin whose songs continue to warm hearts and minds today
White Christmas
Easter Parade
Alexander’s Ragtime Band
(When we’re out together dancing) Cheek to Cheek.
There’s No Business Like Show Business

I could never say that America was “a land so fair.” Someone must have censored those lyrics to deceive us all. America is my home, but if I had been born in Poland after my parents were born there (they were born in New York City), it would not have been “my home sweet home” as the lyrics say. I took this up once in Philadelphia with the granddaughter of baseball legend Roy Campanella and we agreed that America is home because mom and pop were born here. Poland would not have been my “home sweet home” either because of its history related to pogroms long before the Holocaust.
Now we can turn to America the Beautiful. Yes the United States is beautiful, including Alaska and Hawaii. The lyrics were written by Katharine Lee Bates in Newark, New Jersey in 1895. The melody that we know came about much later. Bates wrote “That the hymn has gained…such a hold that it has upon our people, is clearly due to the fact that Americans are at heart idealists with a fundamental faith in human brotherhood.”

In 2012 Chemi Shalev in HAARETZ wrote that America the Beautiful is in a league of its own with Hatikvah. I agree with him when he reveals the hopes for both the United States and Israel to live in a world where those powerful lyrics “and crown thy good with brotherhood from sea to shining sea” make us all great. It was this kind of idealism that Katharine Lee Bates had in mind (her inspiration was the beauty of Colorado). Shalev tells about the epic battle between the two songs in the 1920s and 1930s and it was democratically resolved during the Hoover Administration. War veterans gathered 5 million signatures in support of The Star-Spangled Banner. Congress and the President made it official.

You may know that the post-World War I period was very turbulent to say the least. There was a depression that came on during the Hoover years and the United States had Hoovervilles spring up all over including Central Park.

Things were not pretty and there was a great fear of the Communists, which was aggravated by people in America who supported the Fascists and Hitler. I would imagine that the thought of “brotherhood” was rejected by those fears and fears of brotherhood with African-Americans and foreigners, especially given the hostile climate toward many ethnic groups and the role that Congress played in keeping people out from those countries. Today we have learned that the famous Anne Frank whose Diary of Anne Frank has been read all over the world was one of those prevented from entering the United States, blocked by the United States government.

Shalev tells us that Donald Trump has taken a page from Netanyahu’s political book in calling for “civility” in America, telling how liberals are pounced on for saying something that gets misinterpreted. There is no time for “civility” anywhere. Countries need great improvements and the people often know what they need, but there elected officials get in the way.

In my last article about the N.A.A.C.P. Convention I wrote about Senator Tim Scott, an African-American from South Carolina, who doesn’t know what to say to Trump about the needs of African-Americans and who must be replaced by someone much better. Unbelievable. All Scott has to do is call a meeting with African-American leaders around the country, find out what is needed, and go to Trump. Things are not really going to improve by going to Kanye West or Mike Tyson.

Trump does not like to apologize, but I would like to see him apologize for the immigration policies that led to the death of Anne Frank (and other Jews). If I were president of Israel, I would not allow him in Israel at all and he could not speak at the Holocaust Memorial or Yad Vashem. These are “tough” words, but they are straight from the heart that pumps my blood. Netanyahu has had lots of trouble in his years in politics and I would hope that he falls from grace as well. Make Trump apologize.

I just wish to tell my readers that the seed for this article was an article about “nationalism” by Megan McArdle in the New York Post and Washington Post. We could replace our national anthem at any time. It is toxic as people on the right and left are toxic (others in the middle as well). McArdle cannot see getting rid of the national anthem at sporting events. I can see getting rid of it at sporting events.

In Poland, I am told, that the national anthem is or was played only at international events. In thinking about that, it may have something to do with the control by communists, since Poland was part of the Soviet Union.