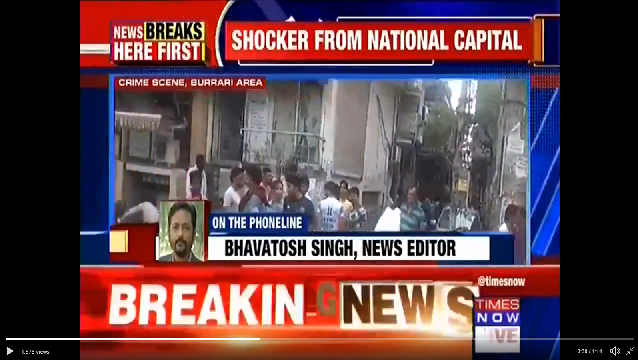 Indian police found eleven bodies of one family in mysterious circumstances on Sunday. 10 of them hanging from the ceiling blindfolded, gagged and hands tied behind the back. They were found in their home in Burari village in the northern New Delhi.

The victims, four men and seven women including teenagers and a 70-year-old woman who was found laying on the floor, died by suicide or were killed, police said, according to the local media.

There was no sign of forced entry into the house. The house belongs to a businessman who ran a grocery store in the same building.

11 of a family found dead in Burari area of outer Delhi, 7 men and 4 women have been found hanging from the overhead wire mesh, all bodies have a blindfold, cops say bodies will be sent for post-mortem to ascertain the cause of death @bhavatoshsingh with details pic.twitter.com/kYjGnmxWbR

Hindustan Times newspaper reported that at around 8 am Sunday, a neighbor who used to go for morning walks with the store owner went to pick him up, and found the door of the house open and the whole family, including his friend, hanging.  He raised an alarm and called the police.

Neighbors were telling the police that the family was busy with wedding preparations. Police official Rajesh Khurana told reporters that all angles were being investigated. “We can’t rule out anything,” he said.

“I haven’t seen such a crime before,” Vineet Kumar, additional deputy commissioner of police in north Delhi, told Reuters. “We are investigating all possible angles including suicide, foul play. We can say something about the cause of death only after the postmortem reports come.”