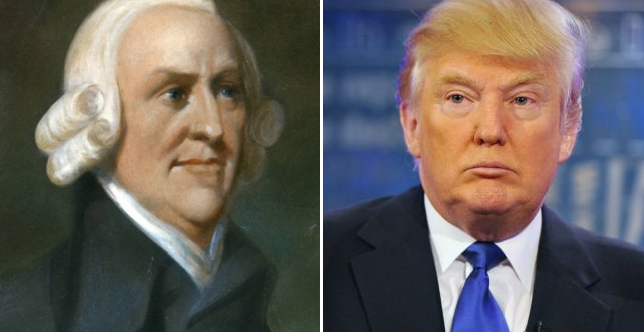 “The rich man glories in his riches, because he feels that they naturally draw upon him the attention of the world….At the thought of this, his heart seems to swell and dilate itself within him, and he is fonder of his wealth, upon this account, than for all the other advantages it procures him.”

In certain obvious respects, the Trump presidency reaffirms long-hardening polarities of class warfare in the United States. Accordingly, America’s Edenic myth of “equality” has continued to unravel before the relentless economic assaults of this presidency. At the same time, because these grievously incoherent assaults are potentially as ruinous for the rich as for the poor – especially when they take their current form of plainly irrational trade wars – the net effect could include a more general leavening of American well-being.

In other words, the hideously injurious Trump tariff policies and their correlates will likely be “egalitarian” in the total of inflicted harms, but this egalitarianism will mean that rich and poor must “share” in the expanded suffering.

For both scholars and policy-makers, such evident irony should bring to mind, inter alia, Adam Smith and his Inquiry into the Nature and Causes of the Wealth of Nations. Long ago, Smith had already studied and understood the manifestly complex nuances of international trade, and was quick to point out that trade policy outcomes were often unexpected and counter-intuitive. Published in 1776, Wealthwas indeed a revolutionary book; yet, quite conspicuously and purposefully, it did not expressly favor the monetary or social interests of any one particular economic/social class over another.

For the most part,  Adam Smith sought an optimal market of goods and services that could suitably promote the wealth of all competing classes, simultaneously.

Understandably, what he did not seek, above all, was a system of production and exchange that could quickly become corrosive and deleterious “across the board.” In this connection, he had expressly highlighted the numerous prospective errors of any baseless protectionist strategies, most notably any unilateral imposition of tariffs that could plausibly be reciprocated. Famously, in such classical assessments, Smith had identified an “invisible hand,” in essence, a foreseeable “convergence of satisfactions” whereby the unstoppable compulsions of individual self-interest and the equally insistent needs of entire nations could somehow be reconciled.

But what might this seemingly quaint 18th-century stance have to do with our present and increasingly uncertain American economic moment? To begin a proper answer, the commendably seamless arguments of Adam Smith remain a reflexive  mainstay of modern political conservatives. Never a plutocrat, Smith reasoned persuasively that various arrangements of private wealth maximization could still permit the poor to live tolerably. Rejecting his contemporary Jean Jacques Rousseau’s very contrary position –  that is, that “the privileged few…gorge themselves with superfluities, while the starving multitude are in want of the bare necessities of life” –  he foresaw in capitalism not just an enviably rising productivity, but also the indispensable foundations for ensuing political liberty.

Later, of course, Karl Marx offered a distinctly alternate view. Marx, for his part, had seen in these virtually identical and allegedly harmonious dynamics of economic competition a veritable font of personal and collective self-destruction. Moreover, it was, for him, a deeply regrettable and execrable font.

There is more. In his own time, Adam Smith was undaunted by any determinedly specious political arguments that were grievously detached from intellect. By applying various capitalistic modes of production and exchange, he had reasoned, an inextinguishable social inequality might still be cheerfully reconciled with certain measurable increments of human progress. In those troubling cases where the prevailing facts could have taken him in different directions, we may presently assume, he would have felt compelled to make aptly reciprocal modifications of his core theories.

Most assuredly, among Donald Trump’s most senior economic advisors,  there is no Adam Smith. Indeed, enchanted by conceptual simplifications, which always appeal to “the base,” self-declared supporters of Adam Smith wittingly ignore the admirable depth and complexity of  his conceptual thought. For example, they disregard that Smith’s presumed system of “perfect liberty” can never be consistent with robust encouragements of an endlessly needless consumption.

Adam Smith could never have abided “conspicuous consumption,” a phrase that would later be used more popularly and more effectively by sociologist Thorsten Veblen. This particular species of consumption, driven in the final analysis by variously recalcitrant cravings related to individual self-worth, could never expect to become a rational engine for economic or social improvement. Today, this still crucial point should resonate instructively with all who would heap gratuitous praise upon a White House that blatantly equates personal success with the conspicuous envy of mostly anonymous others.

In any event, under no imaginable circumstances could Adam Smith have championed a system of consumption premised on the notion that material acquisition ought to stem originally from the prior wish to impress other people.

Significantly, although Adam Smith already understood both the psychological and economic dynamics of “conspicuous consumption,” he also loathed and feared such dynamics. For him, it was reasonable that the market should routinely regulate the price and quantity of available goods according to the unchanging and “natural” arbiters of public demand.  This market, he urged accordingly, must never be manipulated from above, by governments, especially by way of deceptively foolish policies that must create indeterminate tariffs and potentially cascading trade wars.

Under President Donald Trump, America is rapidly losing sight of Adam Smith’s “natural liberty.” In vain, this president still attempts to construct a viable economic policy upon overflowing oceans of shallow slogans and empty witticisms. Arguably, our correlative or derivative problems of orchestrated trade barriers and manipulated hyper-consumption are not primarily economic. Rather, Smith would have warned, spurred on by ineradicable personal doubts of self-worth and self-esteem, these problems should be examined as fundamentally psychological in origin.

Ironically, while the Trump administration remains committed to policies that are ritually oriented toward “buying more,” the tangible effects of its needlessly combative trade policies will have a decidedly opposite set of outcomes. It follows that these tariff-centered policies, supporting retrograde attitudes toward “conspicuous consumption” and price inflation at the same time,  must represent the absolute worst of all currently possible policy options.

Whether Democrats or Republicans, all Americans already believe, more or less directly, that our national economic efforts must somehow be oriented toward status-based purchasing.  Oddly enough, however, disregarding Adam Smith, almost no one seeks to inquire: “What sort of society can we ultimately expect from such an economic system that is based  upon feverish social imitation and absolutely endless conformance”?

Writing in the middle of the nineteenth century, the American Transcendentalist philosopher, Ralph Waldo Emerson, had remarked presciently on  “self-reliance.” Any foolish “reliance upon property,” Emerson warned, is the predictable result of a “want of self-reliance.” What suitable corrective was needed? Emerson had answered succinctly, and without discernible hesitation: “High thinking and plain living.”

Nonetheless, the relentlessly conformist call of American mass society still remains loud, crass and seemingly persuasive, especially under the aegis of a president making systematic war upon intellect, education and all serious elements of learning.

In his Theory of Moral Sentiments (1759), Adam Smith first noted that human beings are not made happier by their possessions, but that the rich, in seeking the “gratification of their own vain and insatiable desires,” may still advance the “interest of society.” With remarkable originality, Smith had explained, the wealthiest members of the nation, without ever consciously intending such generalized benefit, “are led by an invisible hand” to bring forth necessary reductions in social inequality.  But today, in 2018, where exactly shall we seek these manifestly desirable “reductions?”

Back in the 18th century, Adam Smith would likely have shuddered with any foreknowledge of the Trump presidency, not only because he would have been unsympathetic to the supporters of any plainly injurious plutocracy, but also because he already recognized the implacable consequences of an economic theory based intentionally upon  delusion. As long as our American economy remains animated, at its core, by both conspicuous consumption and more generally destructive trade wars, an accelerating class warfare will be our tell-tale narrative.

Significantly, however, the results will weigh heavily upon both rich and poor.

The apparent beauty of Smith’s “self-regulating” market, a dynamic flow of goods and services that is its own very efficient guardian, will crumble inelegantly before the multiple contrived wants of “ruthless profiteers.” In such a self-poisoning economy and society, one sustained by the Trump White House,  agonized convulsions, sometimes overlapping and intersecting, would play cruel havoc with Adam Smith’s “invisible hand.” Then, in Trump’s ever-despairing universe of expanding trade wars and growing class warfare, America’s rich and poor would suffer together.

In essence, this is the only “democracy” we can ever expect from a president who acts in thoroughly misguided opposition to Adam Smith.

Louis René Beres was educated at Princeton (Ph.D., 1971), and is Emeritus Professor of International Law at Purdue. His twelfth book, Surviving Amid Chaos: Israel’s Nuclear Strategy, was published in 2016. His other writings have been published in Harvard National Security Journal; Yale Global Online; World Politics; Bulletin of the Atomic Scientists; Israel Defense; Parameters: Journal of the US Army War College; Special Warfare; Oxford University Press; The Jerusalem Post; Infinity Journal; BESA Perspectives; US News & World Report; The Hill; and The Atlantic.