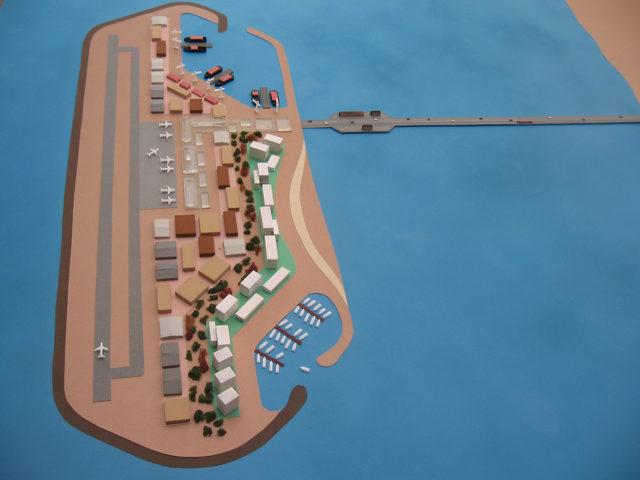 Israeli defense officials have been examining ways to improve the dire humanitarian situation in the Gaza Strip in an effort to avoid a violent escalation that could lead to war.

One possibility that has been under examination for over a year is the construction of a seaport through which Gazans could bring in merchandise, construction materials and civilian equipment to help the local economy recover.

According to the Israeli Navy, has determined any of the proposed solutions for a Gaza seaport were feasible, so long as Israeli forces are authorized to search all cargo entering the strip.

Professional opinion prepared by the Navy for the political echelons, said all four of the options currently under consideration for the seaport are possible: a local seaport (the strip’s existing docks are in shallow water, making it impossible for larger vessels to dock); an artificial island off the shores of the strip that would include a port; connecting Gaza to the Ashdod seaport; and building a port in Cyprus through which goods will be transferred to Gaza.

While the first two options are expensive and complex to construct—and will, therefore, take more time—the first two are easier to realize in the near future.

The Navy determined, however, that random security checks will not suffice, and therefore all cargo must be screened before going into the strip.

“There’s no question that the screening must be Israeli. We won’t play (Russian) roulette, because there’s a destructive potential in naval transport,” a Navy officer said.

The move—which will include assistance, mostly financially, from foreign elements such as Egypt or Qatar—is likely the “big settlement” a senior Southern Command officer alluded to two weeks ago, after warning of a “slippery slope down which we could fall if there is no initiative from our side.”

“We can allow for small steps to be implemented that will give us a year to a year and a half of calm. We do not have to help Hamas and prop them up, but the size of Hamas’s concessions will correspond to the size of the settlement,” he elucidated.

Since then, Defense Minister Avigdor Lieberman has repeatedly come out against any sort of agreement with Hamas that does not include the return of the two Israeli citizens and the remains of two IDF soldiers being held by the terror group.

Meanwhile, behind the scenes, additional relief measures are being examined in the naval arena. Israel is considering allowing Gaza residents to set up large sea cages off the shores of the strip to significantly increase the number of fish being caught.

Fishing has become a significant source of income for Gaza residents, which recently led Israel to increase the fishing zone from six to nine nautical miles.

“The solution for the Gaza Strip problem is not military,” a Navy officer said. “We returned the fishing boats we confiscated due to repeat deviations (from the fishing zone).”