US President Donald Trump and North Korean leader Kim Jong Un have met for the first time in Singapore on Monday as the two leaders sought ways to end a nuclear standoff on the Korean peninsula.

While the world’s eyes upon them, the two men started their historic summit shaking hands. Trump said he thinks it will be a “terrific relationship,” and Kim, using a translator, said North Korea had to overcome a number of “obstacles” to get to this moment.

The expectations are high. Trump seeks a complete and verifiable denuclearization of the Korean peninsula, and Kim is looking to get the sanctions on the North eased.

Like the visit in 1972 of former U.S. President Richard Nixon to China led to the transformation of China, this meeting could bring lasting change to the security to Northeast Asia.

The one-on-one meeting started with translators and top officials only.

TRUMP: “Working together, we will get it taken care of.”

KIM: “There will be challenges ahead but we will work with Trump. We overcame all kinds of skepticism and speculations about this summit and I believe that this is good for the peace.”

On the eve of the summit, the White House unexpectedly announced Trump would depart Singapore by Tuesday evening, meaning his time with Kim would be fairly brief. “We are hopeful this summit will have set the conditions for future successful talks,” Secretary of State Mike Pompeo said, sought to keep expectations for the summit results lower. 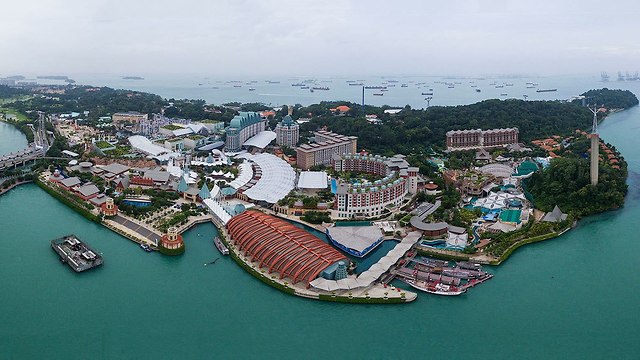 Associated Press reported that the sudden change in schedule added to a dizzying few days of foreign policy activity for Trump, who shocked US allies over the weekend when he used a meeting of the Group of Seven industrialized economies in Canada to alienate America’s closest friends in the West. Lashing out over trade practices, Trump lobbed insults at his G-7 host, Canadian Prime Minister Justin Trudeau. Trump left the summit early, and as he flew to Singapore, he tweeted that he was yanking the US out of the group’s traditional closing statement.

As for Singapore, the White House said Trump was leaving early because negotiations had moved “more quickly than expected,” but gave no details about any possible progress in preliminary talks. On the day before the meeting, weeks of preparation appeared to pick up in pace, with US and North Korean officials meeting throughout Monday at a Singapore hotel.

Trump spoke only briefly in public on Monday, forecasting a “nice” outcome. Kim spent the day mostly out of view—until he left his hotel for a late-night tour of Singapore sights, including the Flower Dome at Gardens by the Bay, billed as the world’s biggest glass greenhouse.

As Trump and Lee sat down for a working lunch at the Istana house, the president sounded optimistic, telling Lee, “We’ve got a very interesting meeting in particular tomorrow, and I think things can work out very nicely.” Trump had earlier tweeted about “excitement in the air!”

It was a striking about-face from less than a year ago, when Trump was threatening “fire and fury” against Kim, who in turn scorned the American president as a “mentally deranged US dotard.” As it happens, the North Korean and the American share a tendency to act unpredictably on the world stage.

Beyond the impact on both leaders’ political fortunes, the summit could shape the fate of countless people—the citizens of impoverished North Korea, the tens of millions living in the shadow of the North’s nuclear threat, and millions more worldwide. Or, it could amount to little more than a much-photographed handshake.

Still, the sense of anticipation was great in Singapore.