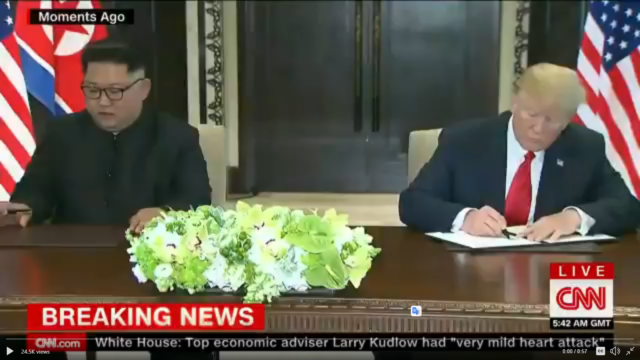 “The world will see a major change. I would like to express my gratitude to President Trump.” North Korean leader Kim Jong Un speaks through an interpreter in a signing ceremony after Singapore summit.

When asked if he will invite Kim Jong Un to the White House, President Trump replied “Absolutely I will.”

US President Donald Trump has concluded Tuesday morning meetings in Singapore and said that his meeting with North Korean leader Kim Jong-un went “better than anybody could have expected.” Trump also said he and Kim will be “signing” some sort of document.

Kim called the one on one sit-down a “good prelude for peace” as Trump pledged that “working together we will get it taken care of.”

In a meeting that seemed unthinkable just months ago, Trump and Kim met shaking hands warmly. In advance of their private session, Trump predicted “tremendous success,” while Kim said “we have come here after overcoming” obstacles. Many of those watching would think it was a scene from a “science fiction movie,” Kim said.

US President Donald Trump and North Korean leader Kim Jong-un signed a document after three and a half hours of meetings and after a joint lunch.

Before the signing ceremony, a US administration official told CNN that it was a joint statement that they recognized the progress made at the summit and intended to seek further progress. “We have had a historic meeting and signed a historic document,” Kim Jong-un said before signing, “The world will see a big change, and I want to thank President Trump for making this meeting happen.”

Trump also called the document “very important,” although it was not clear exactly what it meant.

The summit ends with no real summaries of the nuclear issue and no symbolic declaration of the end of the Korean War, a possibility raised in recent weeks.

When Kim was at his side, Trump announced that he and the North Korean tyrant would soon sign a document-and a little later they signed it.

In the run-up to the meeting, Trump had predicted the two men might strike a nuclear deal or forge a formal end to the Korean War in the course of a single meeting or over several days. But in the hours before the summit, the White House unexpectedly announced Trump would depart Singapore earlier than expected—Tuesday evening—raising questions about whether his aspirations for an ambitious outcome had been scaled back.

Giving voice to the anticipation felt around the world, South Korean President Moon Jae-in said Tuesday he “hardly slept” before the summit. Moon and other officials watched the live broadcast of the summit before a South Korean Cabinet meeting in his presidential office.

After meeting privately and with aides, Trump and Kim moved into a working luncheon when Trump saying: “Getting a good picture everybody? So we look nice and handsome and thin? Perfect.”

Experts believe there’s some hope that diplomacy can replace the animosity between the US and the North.

Associated Press and Reuters contributing to this article