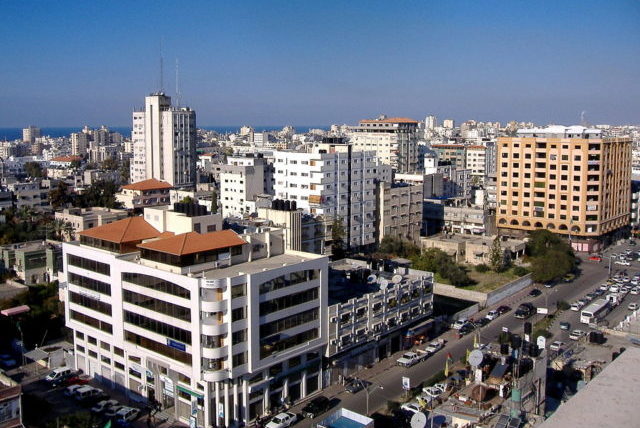 I loved Gaza. That is a play on words. The Biblical Song of Songs says that love is strong as death. Strong in Hebrew is Aza. Aza is also the Hebrew name of Gaza.

I have spent many happy hours in Gaza. I had many friends there. From the leftist Dr. Haidar Abd al-Shafi to the Islamist Mahmoud al-Zahar, who is now the foreign minister of Hamas.

I was there when Yasser Arafat, the son of a Gazan family, came home. They put me in the first row of the reception at the Rafah border, and that evening he received me at the hotel on the Gaza sea shore, seating me next to him on the stage during a press conference.

I met with a friendly attitude everywhere in the Gaza Strip, in the refugee camps and in the streets of Gaza City. Everywhere we talked about peace and about the place of Gaza in the future State of Palestine.

GOOD, BUT what about Hamas, the terrible arch-terrorist organization?

In the early 1990s, Prime Minister Yitzhak Rabin exiled 415 prominent Islamists from Gaza to Lebanon. The Lebanese did not let them in, so the exiles vegetated for a year in the open air on the border.

We protested against the expulsion and put up a tent camp opposite the Prime Minister’s office in Jerusalem. We stayed there for 45 days and nights, including some days in snow. In the camp were Jews and Arabs, including Israeli Arab Islamists. We spent the long days and nights in political discussions. What about? About peace, of course.

The Islamists were nice people, and treated my wife, Rachel, with utmost civility.

When the exiles were finally allowed home, a reception was held for them in the largest hall in Gaza. I was invited, together with a group of companions. I was asked to speak (in Hebrew, of course) and after that I was invited to a banquet. 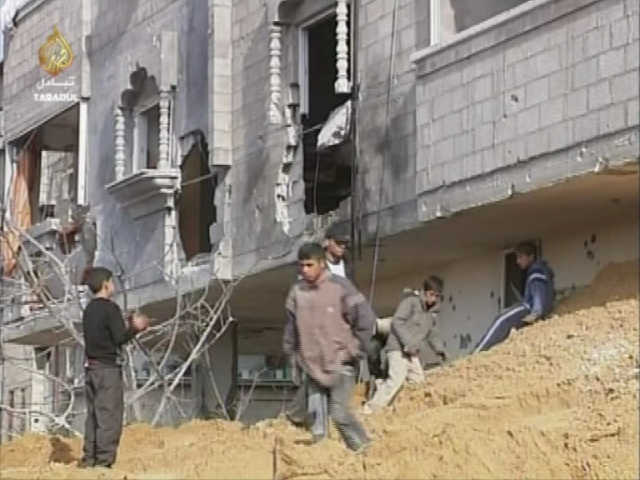 I am recounting all this in order to describe the atmosphere at that time. In everything I said, I stressed that I was an Israeli patriot. I advocated peace between two states. Before the first Intifada (which started on December 9, 1987) Gaza was not a place of dark hatred. Far from it.

Masses of laborers crossed the checkpoints every morning in order to work in Israel, and so did the merchants who sold their wares in Israel, or crossed Israel on the way to Jordan, or got their merchandise through Israeli harbors.

SO HOW did we succeed – we, the State of Israel – in turning Gaza into what it is today?

In the summer of 2005 the then Prime Minister, Ariel Sharon, decided to cut all ties with the Gaza Strip. “Arik”, a soldier in his heart, decided that the costs of occupying the strip were higher than the benefits. He pulled the army and the settlers out and turned the strip over – to whom? To nobody.

Why to nobody? Why not to the PLO, which was already the recognized Palestinian authority? Why not within the framework of an agreement? Because Arik hated the Palestinians, the PLO and Arafat. He did not want to have anything to do with them. So he just left the strip.

But nature abhors a vacuum. A Palestinian authority came into being in Gaza. Democratic elections were held, and Hamas won in all of Palestine. Hamas is a religious-nationalist party which originally was furthered by the Israeli secret service (Shin Bet) in order to undermine the PLO. When the PLO did not accept the election results, Hamas in Gaza took power by force. Thus the present situation came into being.

DURING ALL this time we still had a positive option.

The Gaza Strip could have turned into a blooming island. Optimists spoke about a “Second Singapore”. They spoke about a Gaza harbor, with due inspection of incoming goods either in Gaza or in a neutral port abroad. A Gaza airport, with appropriate security inspection, was built and used and then destroyed by Israel. 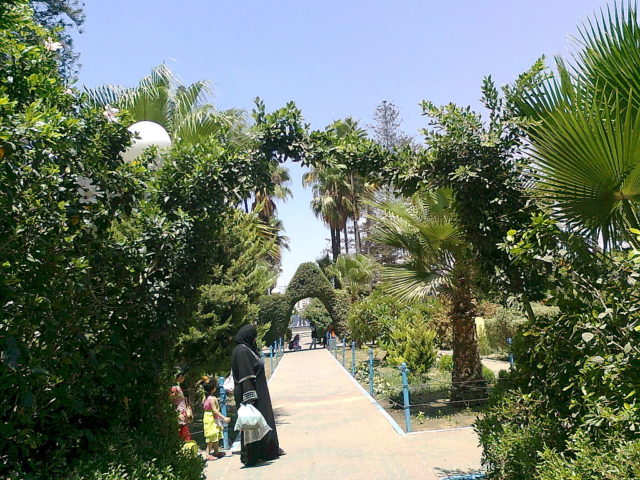 And what did the Israeli government do? The very opposite, of course.

The government subjected the Gaza Strip to a stringent blockade. All connections between the strip and the outside world were cut. Provisions could come only through Israel. Israel increased or decreased the import of essential necessities at its whim. The affair of the Turkish ship Mavi Marmara, which was bloodily stormed near the Gaza shore, emphasized the total isolation.

The Gaza population has now reached about two million. Most of them are refugees from Israel, who were driven out during the 1948 war. I cannot say that I am innocent – my army unit fought in the south of Palestine. I saw what was happening. I wrote about it.

The blockade created a magic circle. Hamas and the smaller (and more extreme) organizations carried out acts of resistance (or “terror”). As a reaction, the Israeli government intensified the blockade. The Gazans answered with more violence. The blockade became worse. And so on, up to and including this week.

What about the southern border of the strip? Rather bizarrely, Egypt cooperates with the Israeli blockade. And not only because of the mutual sympathy between the Egyptian military dictator, Abd al-Fatah al-Sisi, and the Israeli rulers. There is also a political reason: The Sisi regime hates the Muslim Brothers, Its banned internal opposition, which is considered the parent organization of Hamas.

The PLO regime in the West Bank also cooperates with the Israeli blockade against Hamas, which is its main competitor within the Palestinian political framework.

Thus the Gaza Strip remains almost completely isolated, without friends. Except some idealists around the world, who are much too weak to make a difference. And, of course, Hezbollah and Iran.

NOW THERE prevails a kind of balance. The Gazan organizations carry out violent acts, which do no real damage to the State of Israel. The Israeli army does not have the appetite to occupy the strip again. And then the Palestinians discovered a new weapon: non-violent resistance.

Many years ago an Arab-American activist, a pupil of Martin Luther King, came to Palestine to preach this method. He found no takers and returned to the US. Then, at the beginning of the second Intifada, the Palestinians tried this method. The Israeli army reacted with live fire. The world saw a picture of a little boy shot while in the arms of his father. The army denied responsibility, as it always does. Non-violent resistance died with the boy. The Intifada demanded many victims.

Truth is that the Israeli army has no answer to non-violent resistance. In such a campaign, all the cards are in the hands of the Palestinians. World public opinion condemns Israel and praises the Palestinians. Therefore, the army’s reaction is to open fire, in order to induce the Palestinians to start violent actions. With these the army knows how to deal.

Non-violent resistance is a very difficult method. It demands enormous willpower, strict self-control and moral superiority. Such qualities are to be found in Indian culture, which gave birth to a Gandhi, and within the black American community of Martin Luther King. There is no such tradition in the Muslim world.

Therefore it is doubly astonishing that the demonstrators on the Gaza border are now finding this power in their hearts. The events of Black Monday, May 14, surprised the world. Masses of unarmed human beings, men, women and children, braved the Israeli sharpshooters. They did not draw weapons. They did not “storm the fence”, a lie spread by the huge Israeli propaganda apparatus. They stood exposed to the sharpshooters and were killed.

The Israeli army is convinced that the inhabitants of Gaza will not stand the test, that they will return to useless violence. Last Tuesday it seemed as if this assessment was right. One of the Gaza organizations carried out a “revenge action”, launching more then a hundred mortar shells into Israel without causing any real damage. That was a useless gesture. Violent action has no chance whatsoever to hurt Israel. It only supplies ammunition to Israeli propaganda.

When one thinks about non-violent struggle, one should remember Amritsar. That is the name of an Indian town where in April 1919 soldiers under British command opened murderous fire for 10 consecutive minutes on Indian non-violent protesters, killing at least 379 and wounding about 1200. The name of the commander, Colonel Reginald Dyer, entered history, for eternal shame. British public opinion was shocked. Many historians believe that this was the beginning of the end of British rule in India.

“Black Monday” on the Gaza border reminds one of this episode.

HOW WILL this end?

Hamas has offered a Hudna for 40 years. A Hudna is a sacred armistice, which no Muslim is allowed to break.

I have already mentioned the Crusaders, who stayed in Palestine for almost 200 years (more then us, at this moment). They agreed to or entered into several Hudnas with the hostile Muslim states around them. The Arabs kept them strictly.

The question is: Is the Israeli government able to accept a Hudna? After inciting the masses of their followers and filling them with mortal hatred against the people of Gaza in general and Hamas in particular, would it dare to agree?

When the inhabitants of the Gaza Strip are choked, lacking medicines, lacking enough food, lacking pure water, lacking electricity, will our government not fall into the trap of illusion and believe that now Hamas will collapse?

That will not happen, of course. As we sang in our youth: “No people withdraws from the trenches of their life!”

As the Jews themselves proved for centuries, there is no limit to what a people can endure when its very existence is at stake.

That’s what history tells us.

MY HEART is with the people of Gaza.

I desire to ask their forgiveness, in my name and in the name of Israel, my country.

I am longing for the day when everything will change, the day when a wiser government will agree to a Hudna, open the border and let the people of Gaza return to the world.

Now, too, I love Gaza, with the love that the Bible says is as strong as death.