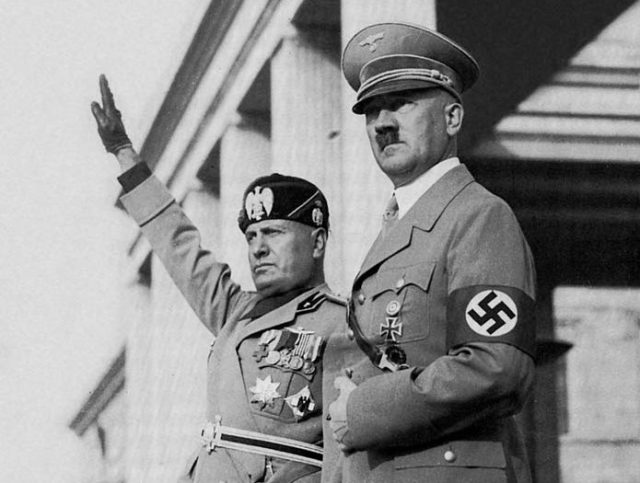 Il Duce and Trump DNA similarities or was Propecia secretly available in Italy?
Trump could have learned something from Franco, thinking about how Trumps himself said that we had to take out the family members of terrorists.  Franco in power saw to it that people in towns where Nationalists were killed or had property taken away were killed even if they had nothing to do with the killings and confiscations.
One person who fled Franco to France where the man committed suicide, was fined after his death and his wife had to pay the fine.  And this was in a country where Franco’s abusive laws impacted severely on women.  Women could be killed by their husbands if they committed adultery.  And there were contradictory laws.  How could a woman be responsible for her husband’s fine if she needed permission from her father or husband to open a bank account, buy property, sue someone, seek a job, and take a trip of any kind?
Women are not oppressed in America in these ways, but who is going to say things are great, except for Trump and some others.  Documented and undocumented immigrants are losing wealth that they have achieved as Trumpian immigration policies are affecting people.
Here are some details of the Franco Regime.
Torturing people, including the immersion of heads in toilet bowls.
Trump campaigned and spoke emphatically about the return of waterboarding and torture.  Gina Haspel’s nomination to head the C.I.A. is the face that Trump wishes to project to his base, a face that is no longer legal and that base must reach to a higher loyalty.  Find someone else for the position.  High ranking military on both sides have expressed their opinions publicly about torture, but over a hundred retired officers know that torture leads to torture of our soldiers and that is not a future that any parent looks forward to.
Even one White House lawyer who can cite illegal actions taken by terrorists and military that we oppose has not spoken out against the use of torture, illegal as it is.  In 2005 that lawyer on the radio said that it was “unfortunate” when torture happens in Guantanamo or a prison.  Then it must be “unfortunate” when our soldiers are tortured and back off? Jay Sekulow also praised John Ashcroft in that radio broadcast and it was Ashcroft who refused to sign off on the continuation of torture by the Bush Administration.
Starvation of prisoners.
Electric shocks to various parts of the body including genitals.
Women imprisoned raped and impregnated (12,000 babies/children places in orphanages).
The belief that just as DNA transmits disease to children, “Marxism” was in their genes.
Priests kept an eye on those who did not attend mass.
Testifying against others was almost required.
The garrote and press were used to kill people.  Garroting continued off and on in Franco’s Spain until 1974.  Public executions stopped in 1959.
Even before the war broke out, people were held accountable for their actions and even inactions.
People who spoke Catalan or Basque was subject to arrest.
Franco railed against the “Jewish spirit.”
In my previous article where I wrote about Torkild Rieber, American intelligence was seriously deficient during the years that he helped Franco.  This American who held very favorable views of Hitler, was providing Hitler’s Germany with much more than oil products.  Torkild, like Trump, considered himself a patriot of the United States.  Normal business reporting from Texaco’s Nazi agents were filled with coded information about ships transporting critical things to Britain and other intelligence.  And the tipping off to Germany helped that country in its war effort as ships and vessels were attacked.  Just as Senator John Mc Cain tipped off James Comey to the Trump Dossier, a British intelligence agent tipped off a major New York newspaper and the scandal led to Rieber’s resignation.  Rieber soon became Franco’s American purchaser of Spain’s oil products.  Rieber continued to have great influence for decades in the United States and even introduced Franco’s family members to Cary Grant, Bob Hope, Alfred Hitchcock, and Cecil B. DeMille.
Trump’s patriotism revealed to us the times when he asked Vladimir Putin if he interfered in our election and Trump was told no.  Trump pathetically showed the American people and the world that he believed Putin.  Rome was burning and Nero was fiddling around.
I met an Italian-American recently who was born in Abruzzi, Italy before World War II.  She suffered great privation in the mountains of Italy during the war and came to the United States where she later owned two restaurants.  She was very upset, referring to the Mussolini in the White House.  I know that many Italian-Americans would disagree with her since they see Trump as their strongman, but the entire subject matter needs much more open debate and people should be following the news so they can be better informed.
I just read a short piece in a New York newspaper in which similarities between Harry Truman and Trump are made.  I can see the comparison clearly as it is presented.  I wonder if the New York Post, that newspaper, would publish the Mussolini in the White House or compare Trump to Franco? In my article Texaco and F.D.R. I am critical of F.D.R. and that criticism extends deeply.
I rest my case, for now.
In this article:Finance