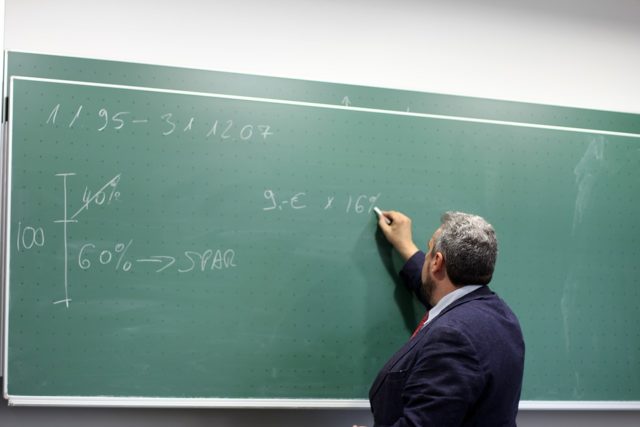 There is a massive gulf in teacher salary across the United States. According to salary listings published by the Bureau of Labor Statistics, Alaska has the highest annual average salary for high school teachers in the country at $85,420. That is over twice the amount their colleagues make in lowest-ranked Oklahoma, where the annual salary only averages $41,880.

The poor salary levels and lack of education funding in Oklahoma prompted teachers to strike for nine days last month and they demanded a $10,000 pay increase over three years. The situation shows little signs of improvement with a quarter of Oklahoma City teachers leaving their jobs every year while the state is struggling to find and keep qualified replacements.

For the vast amount of American’s without significant investments enabling them to live from dividends and capital gains, wages and salaries dictate what they can and cannot afford. Given the strong influence wages and salaries can have on the quality of life of most ordinary American’s, they are rightly seen as a key economic indicator and are often an essential topic of any political agenda.
The highest earning profession in the United States is anesthesiology. The median annual pay for anesthesiologists was 245,100 U.S. dollars in 2015. For those without the educational background or skills to access such jobs, increases in wage levels are often all the more important. However, wages and salaries do not live in economic isolation. Their relationship with inflation dictates whether or not increases in wages and salaries do in fact amount to increases in consumption power. As such, real wages, wages adjusted for inflation, are a more telling measure. Although not extraordinary, average real wages in the United States from 2000 to 2015show that real incomes have increased slowly since the turn of the century.The United States is a complex economy in regards to diverse geographies, education levels, socio-economic backgrounds and individual skills. This diversity is reflected in the diversity of compensation received by different people around the country. Perhaps as a reflection of experience, Among American males, those aged between 55 and 64 have the highest weekly income of any age group. Although younger generations such as millennials have expressed concerns about their position in the economic system, income differences between generations appears to be reasonably uncontentious in political terms.

Of a much greater concern for many members of the general public is the degree of inequality among both genders and ethnic groups in regards to full-time wages and salaries. In 2016, the highest earning cohort was Asian men who on average earned 1,151 U.S. dollars per week. In contrast, Asian women earned 902 dollars per week. Equally as problematic are the apparent wage and salary inequalities between ethnicities, reflecting structural socio-economics issues or at the extreme racism in American society. The average Hispanic woman earned a mere 586 dollars per week.

Wage inequality in the United States – Statistics & Facts
Gender and racial wage gaps in the United States remain, even as they have narrowed in some cases over the years. The female to male earnings ratio in 1990 was 71.6 percent, indicating that a regular female worker earned about 72 percent of the amount a male employee in the same position did. In 2015, this ratio was at 79.6 percent, showing a trend towards closing the wage gap between males and females. Looking at gender and ethnicity combined, all groups, with the exception of Asian men, lagged behind white men in terms of median hourly earnings. For example, in the U.S., the median weekly earnings of an Asian male wage worker were 1,129 U.S. dollars in 2015, while Hispanic or Latino women had the lowest median weekly pay, at 566 U.S. dollars.

Another factor determining income is region, and the distribution of income within it. In 2015, the District of Columbia had the highest average wage in private industry at over 81 thousand U.S. dollars, and it had the highest inequality in income distribution with a Gini coefficient score of 0.54. The Gini coefficient is a statistical measure of inequality with zero representing perfect equality and 100 representing perfect inequality. On the opposite side, Hawaii with score of 0.43, was ranked as the most equal state. There is a general trend in the U.S. of increasing inequality between the poor and the wealthy. In the time period from 1990 to 2015, the Gini coefficient for household income has increased by 0.5 points.

In this article:US, Finance, salaries