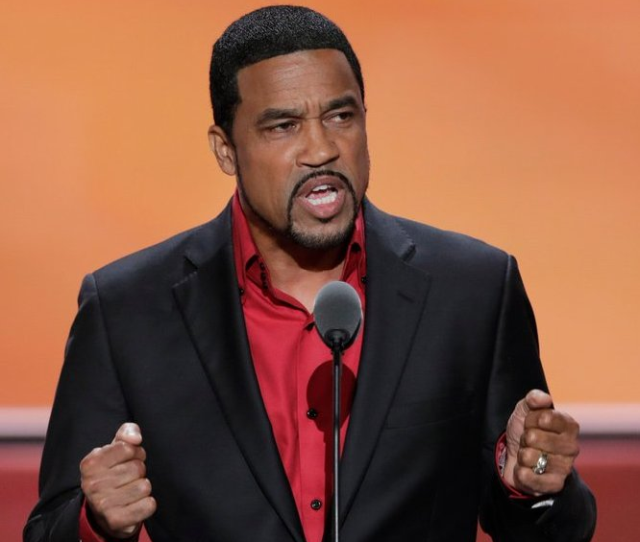 African-Americans were arrested in the office of Senator Jeff Sessions (Alabama) in 2017 after the senator did not grant them a meeting. Sounds like the South has risen again?

Pastor Darrell Scott did not bring about a nationally publicized truce among gangs in Chicago which has had 48 people shot in the last several days. And Trump, true to form, is talking about the stabbing in London and ignoring the great violence disturbing our peace in the United States.
I know things that could be done with Colin Kaepernick, who is capable of transforming community-police relations. He should not attend the White House event. The White House has got to go back to the drawing board.

The Trump presidency is highly debated. Fox News reported the Trump Corporation settlement with the students who sued him (paying out $25 million) before trial, but Fox News only indicated fraud charges in the article. The expected trial fell into the same RICO category as the Gambino crime family, the Lucchese Crime Family, the Latin Kings, the Catholic sex abuse cases, and Michael Milken (who served 22 months in jail). The case can be researched under Art Cohen vs Donald J. Trump.

Pastor Darrell Scott overlooked Trump’s favorite biblical saying and continues to overlook “An Eye For An Eye.” In Deuteronomy 19:21 it says “God calls us to deal with one another with integrity, being faithful witnesses, for the protection of ourselves or others and never hurting others by bearing false witness against them.”

Your work really concerns me very much. Senator Jeff Sessions did not grant a meeting with the N.A.A.C.P in 2017 and now you and Donald Trump are collaborating on a “race” forum with African-American athletes and musical artists (to follow the first summit). Senator Sessions could have granted a meeting with the N.A.A.C.P. in Mobile, Alabama just by informing the scheduler about giving those people a time and date. Don’t you think that police have much important things to do than lock up people fighting for civil rights? Pastor Scott your alliance with Donald Trump will be considered by most African-Americans as a collaborationism, not as a bridge between people which any pastor, priest, or rabbi should be doing. I should tell you that history has shown us that rabbis and priests collaborated with the Nazis.

Decades ago I was on a jury in a libel case where a rabbi sued a professor at City College for “libel” in a matter growing out of the Holocaust in Hungary. We did not even have to deliberate in the matter as the judge dismissed the case, because there was no evidence supporting the rabbi’s case and the professor had done his research well.

It really does not matter if Trump is or isn’t a racist. His policies are largely hurting people of color all over the United States. A comparison of what is taking place at H.U.D. alone since the new administration would be sufficient by itself, where people are now facing higher rents going toward thirty-five percent of their income.

Nobody in the White House seemed to care about the arrest of the N.A.A.C.P. members including you. We could go on and on about this, including citing budget and tax reform issues. Then there is Secretary Betsy De Vos’ work to reduce major complaints in education where there is a pattern of discrimination. And did you not sit back when John Kelly lied about Frederica Wilson and her role in securing funding for the F.B.I.? Which she did not do!

I know that the White House is trying to get great publicity to the people, which this White House could do without inviting anyone. Donald Trump just has to say that he is doing great with African-Americans as he has done since the campaign. With those important mid-term elections coming up, I would suggest that you try other avenues to help Trump. Jim Brown, Herschel Walker, and Mike Tyson cannot help Trump. Evander Holyfield signed on to help Muhammad Ali’s former wife Khalilah Camacho-Ali and their son Muhammad Ali, Jr. in their fight to protect Muslims being detained in airports by the Trump Administration.

Colin Kaepernick needs much more assurance from Donald Trump than just attending a White House event to see that Trump is not a racist. Kaepernick was not opposing Trump and calling him a racist. He was calling out injustices against African-Americans by kneeling instead of standing during the national anthem. And Kanye West should go pass around notes at the event to prove that African-Americans had a “choice” to be slaves. Success, great success, will be assured even if no one shows up. Pastor in addition to all of that, Trump did not mention Kwanzaa at the end of last year, his first year in office, to reach out to African-Americans. Tiger Woods plays golf with Trump, but Trump is just about the last person that I would ever want to play with.

Pastor, it has been reported recently that Omarosa Manigault, who was an important person in the White House, finally came out and said that Trump had called the nations of Africa “shithole” countries. Don’t you realize how the people feel in those countries about that? What would you call a person from a “shithole” country? Think about what Trump did.

And I assume that you will begin to get the facts right and join a growing list that includes Rudy Giuliani. After the arrest of those people from the N.A.A.C.P., Roy Moore lost the senate race as the N.A.A.C.P put the word out about how they got arrested. That cannot be undone. Americans of all colors and ethnicities should take note of that and spread the word in every state of our union. Dr. King and others were arrested back in the Civil Rights’ Era and good people (not on both sides as Trump tells it) will not stand for Trump and his policies. No huge amount of Republican campaign money can prevent that backlash.

The public must see the relationship between Trump’s U.S. embassy announcement for Jerusalem and the violence that he has caused. There were over a thousand Palestinian wounded the other day. This, in my opinion, will fuel anti-Zionist and anti-Semitic growth on campuses in the United States. Trump, true to form, is silent about that as he hides behind his Jewish friends (his human shield) including Benjamin Netanyahu. That non-existent embassy is already Trump’s Benghazi as the deaths and wounded grow.

The issues have been clearly defined. Trump must resign in my opinion. Lebron James (See my article Lebron James for POTUS), Steph Curry, and others should not engage in a photo op for Donald Trump.