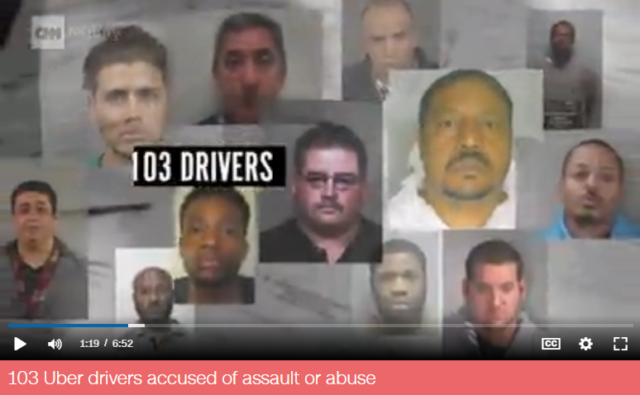 A CNN investigation has found that among Uber‘s drivers in the U.S. at least 103 have been accused of sexually assaulting or abusing their passengers in the past four years.

Some of them are wanted by police, were arrested, have been named in civil suits related to the incidents, or have been convicted for crimes ranging from forcible touching and false imprisonment to rape. At least 31 drivers and dozens of criminal and civil cases are pending, CNN found.

CNN said analysis comes from an in-depth review of federal court records and county court databases for 20 major U.S. cities and police reports. The real number of sexual assaults by Uber drivers or for drivers of other rideshare companies is not publicly available.

In one case a woman from Miami told CNN, that she went to a bar with her friend. Later she took an Uber back home where she left her daughter with her grandmother. She said she was fainted along the way and woke up the next morning in her bed at home with her pants and underwear on the floor.

“You are pretty much hitchhiking with strangers,” she told CNN. “How many people is it going to take to get assaulted before something is done?”

More than 100 Uber drivers have been accused of sexually assaulting or abusing passengers, a CNN investigation finds https://t.co/ExWL3ZWbtr