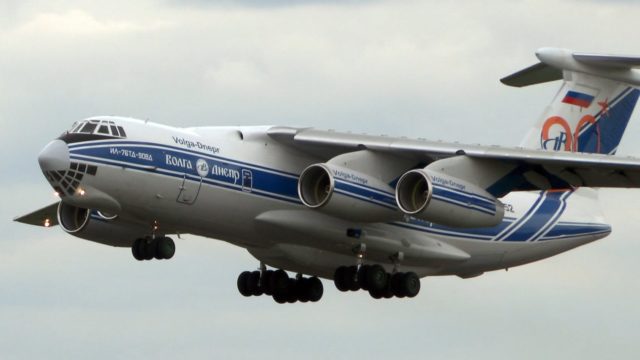 Israel and the United States intelligence are monitoring a series of cargo flights from Iran to Syria that they suspects may be transporting weapons to President Bashar Assad and Iranian forces, CNN reported on Wednesday.

Jerusalem and Washington are both concerned the cargo planes could be carrying arms that potentially would be aimed at Israel.

According to CNN, among the flights that caught the attention of US were two flights by Syrian Air Force IL-76 cargo jets and at least one of an Iranian cargo jet. Jerusalem and Washington worried cargo planes are transporting weapons from Tehran to Damascus which could be used against Israel amid Iranian threats of retaliation for T-4 base attack.

A look at its flight routes shows the plane took off last week from Damascus to Tehran, a two hour flight. Six hours later, the plane was back in the air returning to Syria, but this time to an airport in Aleppo, north of Homs. After several hours on the ground, the plane took off again to a Syrian air force base in Damascus. This unusual flight route was repeated at least three times over the past week, and it is believed the plane was transporting military equipment from the Revolutionary Guards to Assad’s forces.

Another Syrian cargo plane, a YK-ATB, has also been making regular flights over the past week between Aleppo and Damascus.

While arms transfers between Iran and Syria are not unusual, American intelligence has been monitoring these flights in light of Iranian threats to retaliate for an attack on the T-4 airbase in Syria, which has been attributed to Israel.

Seven Iranian military personnel involved in the Revolutionary Guards’ drones program were killed in the strike, which led to an escalating exchange of threats between Iran and Israel.

The Wall Street Journal reported last week that the target of the strike was an advanced Iranian air-defense system that was recently installed at the base.

An intelligence official speaking to the Journal said Trump administration “is working with Israel to blunt Tehran’s expanding influence in the Middle East.”

Russia’s daily Kommersant newspaper, citing unnamed military sources, reported on Monday that Russia might start supplying the anti-aircraft missile systems to Syria in the near future.

Kommersant said that experts believed that Israel would react negatively to any decision to supply the missiles and might bomb the area where they would be deployed.

A Russian diplomat told Reuters on Monday that Israel has asked Moscow not to supply the Syrian military with the advanced S-300 missile systems.

Defense Minister Avigdor Lieberman warned on Tuesday that if Syria uses Russian-made air defense missiles against Israel, the IDF will strike back.

“What’s important to us is that the defensive weapons the Russians are giving Syria won’t be used against us,” Lieberman told Ynet in an interview. “If they’re used against us, we’ll act against them.”