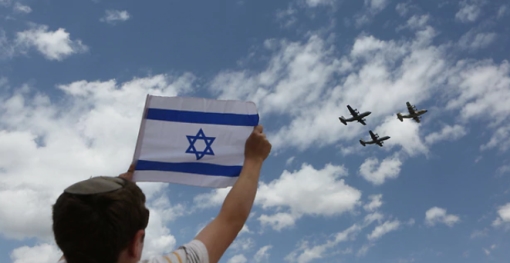 TWO DAYS ago, the State of Israel celebrated its 70th birthday. For days we heard about nothing else. Innumerable speeches full of platitudes. A huge festival of kitsch.

Everyone agreed: It was a historic moment when David Ben-Gurion got up in a small hall in Tel Aviv and declared the foundation of the state.

Everybody still alive from then was asked this week: Where were you at that moment? What did you feel, when history knocked on the door?

WELL, I was alive. And I did not feel anything.

I was a soldier in the new army, which was not yet called “Israeli Defense Army ” (its official name in Hebrew). My company had a small encampment of pup tents in Hulda, a kibbutz south of Tel Aviv.

We were to attack an Arab village called al-Kubab, near the town of Ramleh, that night. Stiff resistance was expected, and we were making all kinds of preparations, as soldiers do before a battle, when somebody ran up and shouted: “Quick, Ben-Gurion is declaring the state in the dining hall!” In the dining hall of the kibbutz was the only radio in the vicinity. Everyone ran there, including me.

A speech by a politician somewhere in Tel Aviv would make no difference whatsoever.

But I was curious about one detail: what would the new state be called? There had been several suggestions, and I wanted to know which one was accepted.

When I heard the word “Israel”, I left the dining room and returned to cleaning my rifle.

The fierce battle, by the way, did not materialize. When we attacked the village from two sides, the inhabitants fled. We entered empty houses, with the food still warm on the tables. The inhabitants were never allowed to return.

The next morning my company was transferred to the south. The Egyptian army was entering Palestine, and we were to stop them before they reached Tel Aviv. But that is another story.

DAVID BEN-GURION, whose voice I had heard that afternoon on the radio, has by now become the national hero of all times, the man who created the State of Israel. This week a documentary about him was broadcast on television.

The director, Raviv Drucker, an excellent journalist, has produced a very good film. It shows Ben-Gurion as he really was, with all his good and bad points.

Compared to him, his successors in the Prime Minister’s office were second rate. Not to mention the present occupant, who is a dwarf.

It was Ben-Gurion who took the decision to declare the foundation of the state at that particular moment, when the last British occupier had left and four neighboring Arab armies were about to enter the country. His colleagues were afraid of the decision and had to be pushed by him.

Frankly, I don’t think that this decision was so momentous. If the declaration had been deferred for some months, it would have made no real difference. After we had won the war, though with very heavy casualties, we could have declared the state at any time.

While the documentary is mostly accurate, there are some mistakes. For example, it shows the masses of Tel Avivis cheering in the streets upon the declaration. That is a falsification, though it has been repeated so often that Drucker can be excused for believing it. In fact, the masses cheered in November 1947, when the United Nations decided upon the partition of Palestine into an Arab state and a Jewish state (and a separate unit in Jerusalem).

When the Jewish state was officially founded on May 14, and Ben-Gurion made that speech, the streets were empty. The young were in the army, their elders were too anxious to cheer.

In that war, some 6300 of us were killed – out of a total Jewish population of 630,000. The equivalent of three million US citizens today. Many more were wounded (including poor me). Losses on the Arab side were even higher in absolute terms.

BEN-GURION’S AFFECTATIONS were many and colorful. He liked to present himself as a great philosopher, and the documentary shows him receiving many hundreds of books, paid for by a rich British Jew – which would be a criminal offense under current Israeli law.

Be-Ge (as we called him) interfered in the conduct of the war, some of his erroneous decisions cost many lives. He also changed the character of the army in ways that we soldiers resented very much.

But all his good and bad decisions were negligible compared to his real historic role: his decision to turn Israel into a bulwark against the rising Arab world.

Of course, the Zionist movement was from the beginning a conscious part of European colonialism. In his book, “Der Judenstaat”, the founder, Theodor Herzl, already promised that the state would be “a part of the wall of European civilization against Asiatic barbarism”.

But it was Ben-Gurion who turned this vague promise into fact from the first day of Israel. According to his first biographer, he detested the Arabs and Arab culture from his first day in Palestine, suppressed the Arab minority in Israel and refused to draw Israel’s borders.

The underlying reason was and is of course, that Zionism from the beginning wanted to dispossess the Arabs from their land in order to create there a new Jewish nation. This was never admitted, but was clear from the beginning.

All Ben-Gurion’s successors, up to the present occupant of the office, followed this line. Even on its 70th birthday, Israel recognizes no official borders. Though we have official peace agreements with two Arab states (Egypt and Jordan) and unofficial cooperation with several more, we are hated by hundreds of millions of Arabs and a billion Muslims. And, even more important: we are at war with the entire Palestinian people. That is the real legacy of Ben-Gurion.

I AM not quite objective on this subject. I, too, was at war with Ben-Gurion.

The longer his reign lasted, the more autocratic he became. Altogether, from his assumption of power in the pre-state Zionist movement, he was the supreme leader for 30 consecutive years. No human being can be in power for so long without becoming a bit deranged.

I became the owner and editor-in-chief of a news magazine soon after the war, and began to criticize him sharply: his increasingly dictatorial manner, his colonialist treatment of the Palestinians, his anti-peace policy, his reactionary socio-economic policy and the corruption of many of his followers.

The chief of the security service publicly called me “Government Enemy No.1”. On one occasion the security chief (nicknamed “Little Issar”) suggested to Ben-Gurion to put me under “administrative detention” – arrest without a court order. Ben-Gurion agreed, but under one condition: that the leader of the opposition, Menachem Begin, would silently agree. Begin refused adamantly and threatened to kick up a stink. He also warned me in secret.

My office was bombed several times, I myself was attacked and my hands broken. (As I have said before, that attack was a blessing in disguise. A young woman named Rachel volunteered to move in with me to help me along for a few weeks, and stayed for 53 years, until her death.)

At the height of our fight, Ben-Gurion ordered the National Theater (Habima) to produce a piece openly directed against me. It showed the vicious editor of a weekly paper, who enjoyed making people miserable. Though he never usually went to the theater, he attended this premiere. The documentary shows him, his wife and colleagues applauding wildly. The piece did not survive three performances.

IT MUST be admitted that he was a very courageous leader. Though a staunch anti-Communist, he let Stalin support Israel with arms during the 1948 War of Independence. He made peace with Germany just eight years after the Holocaust, because the young state desperately needed money. He entered into the famous collusion with France and Britain to attack Egypt (with disastrous results.)

Towards the end, he surrounded himself with young disciples – Moshe Dayan, Teddy Kollek, Shimon Peres and others, and his elderly colleagues became afraid of him. They ganged up on him and threw him out. His efforts to form a new party and stage a comeback ran into the sand. In the end we made a kind of peace.

When we look back today upon his entire career, it must be admitted that his influence on today’s Israel is immense. For better and for worse, he laid the tracks on which Israel is still rolling.

Mostly for the worse.