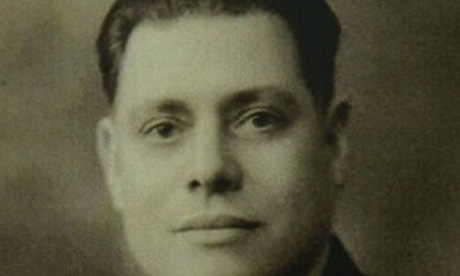 See the Castellanos Movie on FACEBOOK and share and your Google search. See Benjamin Netanyahu attending the inauguration of the monument dedicated to people who saved Jews (February 5, 2018), Trump’s best friend.

In Geneva, Switzerland in 1942, Colonel Jose Castellanos-Contreras in an act of defiance against orders that he received from the Foreign Minister of El Salvador, gave papers to his Hungarian friend, Gyorgy Mandl who also became George Mandel Mantello and First Secretary of the Consulate of Geneva. Those important papers showed that Mandl was a Salvadoran national. The two friends proceeded to issue passport and visas to European Jews and they did not charge a fee for their dangerous work.

Jews from France, Hungary, Poland, Germany, and Czechoslovakia were saved. Entire families were saved from arrest, deportation, and death. Their work extended into Hungary as the Swiss Consulate in Budapest was giving out papers to “Salvadorans.” By 1944 the Salvadoran government granted the two men the right to offer those papers openly instead of secretly. The operation in Hungary provided by Carl Lutz who worked for the Swiss Consulate soon moved the operation to a glass factory where it is estimated that between 30,000 to 50,000 lives were saved.

In 1999 in Jerusalem a street was named El Salvador Street in the Givat Masua neighborhood with Colonel Castellanos’ granddaughter in attendance. In 2010 Colonel Castellanos was honored in Yad Vashem as “Righteous Among the Nations.” The Anti-Defamation League honored the Colonel in 2012. The colonel’s family have worked out to keep his memory and the Holocaust alive, preventing our history from disappearing under the influence of Holocaust deniers.

The Jewish Community Relations Council of Long Island, New York is holding an important immigration forum featuring Congressmen Tom Suozzi and Peter King. The topics include DACA or (Deferred Action for Childhood Arrivals, TPS (Temporary Protective Status), and Comprehensive Immigration Reform. I have personally been at many TPS meetings where community people helped fill out the papers needed to protect people from El Salvador. Donald Trump has reversed the course of action and unprotected people who have had TPS status for decades. Trump has also removed DACA protections of children and parents, demanding a wall after telling the world about his love for DACA. Jews, Christians, and Muslims are supporting this forum. Let us all stop the persecution of people in the United States.

Martin Danenberg is the former teacher of the Consulate of El Salvador in Brentwood, New York where he was always treated like a member of the family of the people of El Salvador. The former Consul General and Vice-Minister of all Salvadorans in the world introduced him as a Salvadoran from Chalatenango, El Salvador.