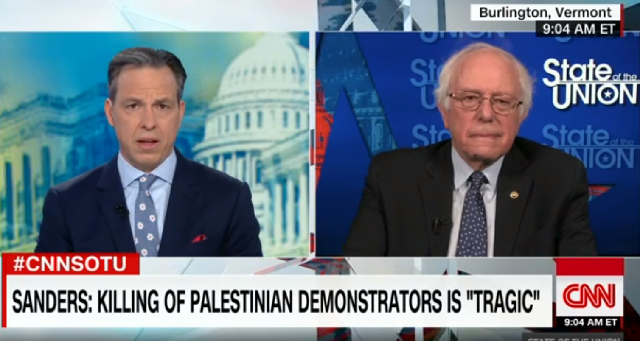 Jewish Senator Bernie Sanders, who was a Democratic candidate for president in the 2016 elections, harshly criticized Israel and the IDF’s handling of the violent clashes on the Gaza border over the weekend on Sunday night.

Sixteen Palestinians were killed in the clashes and some 1,400 were reported injured. The IDF said 10 of the dead were terror activists, including members of Hamas’s military wing. Hamas itself said only five of the dead were its members.

Sanders attacked Israel on Saturday with a tweet, saying, “The killing of Palestinian demonstrators by Israeli forces in Gaza is tragic. It is the right of all people to protest for a better future without a violent response.”

The killing of Palestinian demonstrators by Israeli forces in Gaza is tragic. It is the right of all people to protest for a better future without a violent response.

In an interview with CNN’s Jake Tapper, Sanders was asked if he accepted Israel’s version that most of the Palestinian dead were terrorists who directed attacks against Israel under the cover of protesters.

“No, I don’t,” Sanders responded. “My understanding is you have tens of thousands of people who were engaged in a non-violent protest. I believe now 15 or 20 people, Palestinians, have been killed, and many many others have been wounded. So I think it’s a difficult situation, but my assessment is that Israel overreacted on that.”

He went on to say that “the United States has got to be involved in dealing with the terrible tragedy in Gaza… we’re looking at the need for the international community, led by the United States, to deal with that situation. Gaza is a disaster right now. Youth unemployment is off the charts. We’re going to continue to see those kinds of demonstrations and protests unless the world community recognizes the problem in Gaza and brings the Israelis and the Palestinians together to start addressing those problems.”

This isn’t the first time Sanders has harshly criticized Israel. During the Democratic primary race, he erroneously stated in an interview that Israel killed over 10,000 innocent Palestinians in Gaza during Operation Protective Edge in 2014.

Several days later he avoided addressing the matter, but repeated past remarks claiming Israel responded “disproportionately” in the Gaza war.