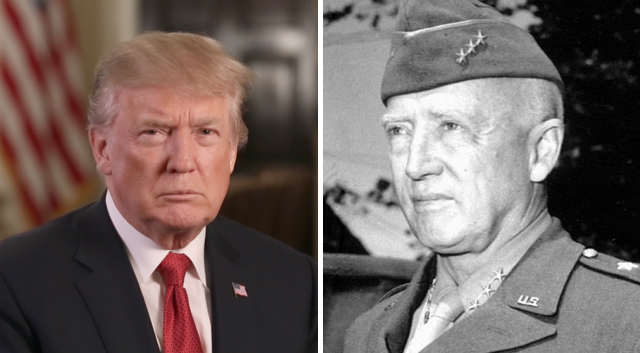 Jake Novak of CNBC pointed out in late 2016 that Donald Trump was doing his best to emulate General George Patton, an American hero.
Trump mentioned Patton’s name in speeches and interviews.
Trump copied the general’s attack style which would keep his political opponents on the defensive.
A Trump mistake that Novak could not predict has just come out.  Read about it soon.
Patton said the “There is one international law; the best army!”  That best army could lose around $20 billion dollars if it builds Trump’s wall.  And that is not what Patton intended, but Trump is not Patton.  But you will see the original sin of Donald Trump through the words of Patton.  Read about it soon.
Trump calls General Mathis the “closest thing we have to Patton.”
Patton slapped a soldier with PTSD or Post Traumatic Stress Disorder in 1943 and Patton was removed from action by Army Chief of Staff George Marshall.  Trump’s comments on foreign and domestic issues make him appear tough like Patton.
Novak stated that as long as Trump is winning, people will most likely go along.
There is one big problem with all of that and it is not in Novak’s article.
In Israel: A Concise History of a Nation Reborn, Daniel Gordis writes this and use it in your judgment of Patton and Trump.  Patton wrote in 1945 “[Others} believe that the Displaced Person is a human being, which he is not, and this applies particularly to the Jews who are lower than animals.”
In my last article which was about Cardinal Dolan, I wrote about how English and others felt about the Irish precisely a century before.  The same way.
There is more for us to digest as Jews or human beings.  Patton wrote “We entered the synagogue, which was packed with the greatest stinking mass of humanity I have ever seen. Of course.  I have seen them since the beginning and marveled that beings alleged (alleged he wrote) to be made in the form of God can look the way they do or act the way they act.”
There is no proof that the attacks on Mexicans who were going to build Trump’s wall (not America’s wall), the comment about “shithole” countries or something “tough” that was never repeated, the denial of Temporary Protection Status to the people of El Salvador ( a good supporter of Israel from the time of Independence),  and the removal of protection against the parents of DACA recipients is not racist.  Maybe the time will come when there is proof.  Why more Jews do not rise up against Trump and his comments and actions I just do not know?  Perhaps the time will come soon for that.  He is defended for having a Jewish daughter and son-in-law, three Jewish grandchildren, and Jewish supporters.
For weeks there has been much talk about denunciations.  Some that deserve it and some that don’t.  Trump deserves it.
In this article:Finance, President Donald Trump