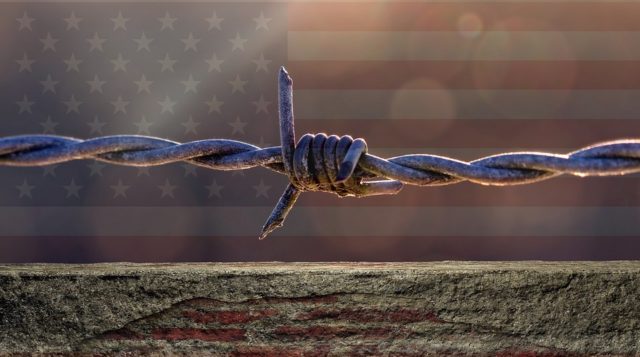 The wall was not part of the $1.1 trillion dollar spending budget in 2015 and Breitbart was annoyed. And now we see that the $1.3 trillion dollar Omnibus budget without the wall again which Donald Trump has taken ownership of. When the article appeared in 2015, the highly influential Breitbart News could not get a fence tax credit passed to permit everyone to be protected? And it could not get the funds designated to build the wall now.

Speaker Paul Ryan has constructed a fence or wall around his property for privacy and security and Breitbart News is fuming, even quoting then Senator Jeff Sessions.

Convince his friends in Russia to pay for the wall.

Threaten Putin and demand payment for the wall.

Put a tariff on all Russian products and make Russians pay for the wall.

Now let us look at what Breitbart is telling people. I hope that the American people decide quickly that enough is enough with news that takes us away from the truth. Someone just quit Fox News, calling it a “propaganda machine.” Any fifth-grade student should be able to see through what I read on Breitbart News.

Fifty-one percent favor building the wall, with a much larger Republican majority in favor of the wall. In the first sentence the article about Paul Ryan and his fence tells its readers that Ryan is denying the American people from having the border fence just like Ryan now has. This is clearly fake news and that is why those 71 percent of Republicans need help in understanding the truth. Here in the United States, our tax laws have permitted us additional tax deductions for energy saving appliances and more. We have not had a fence tax credit to date. That would stimulate the building of fences on a huge number of properties all over the United States. In this manner, the people could have the same advantage as Speaker Paul Ryan. So instead of a military parade in Washington, D.C. for the supreme commander of the free world, let’s have a tax credit for the people who have money and the low-income people can get their fence for free. Read on to find out where additional funds could come from.

Breitbart is providing news and fake news at the same time. And that is an easy thing to do. It goes on more often than even Trump realizes. Then it was mentioned that there is a staff member of the property that walks around protecting Ryan. All one must know is the history of this country to realize that this kind of fence is old news dating back to the nineteenth century. A visit to Newport, Rhode Island and its estates would be an eye opener that people have been that well protected for centuries. It is not at all about Mexicans and the criminals and rapists, and the MS-13. Keep in mind that because Trump has been the president for over a year, the MS-13 must be totally decimated by now and we have nothing to fear from that gang.

Senator Jeff Sessions was also critical of immigration expansionists who build fences around their homes and the article mentioned Mark Zuckerberg for spending an additional $30 million for adjoining properties so that he could have more privacy. If It was good enough for Carnegie and Vanderbilt and a million others, it’s good enough for Zuckerberg who happens to be a Democrat who supports the immigrants?

Nowhere in this nation do I see a protest, a protest by the people about spending the $18-$25 billion dollars for the wall that I have been writing about in the Jewish Business News? That the money should be spent to protect all of us at home in our communities and in our schools. At the very least, wouldn’t it be great if the news media attacked my proposal by calling it fake news?

Also remember that most people who are called “illegals” in this country came here with a visa and overstayed their visa. And they did not come through the southern border down Mexico way as some people think.