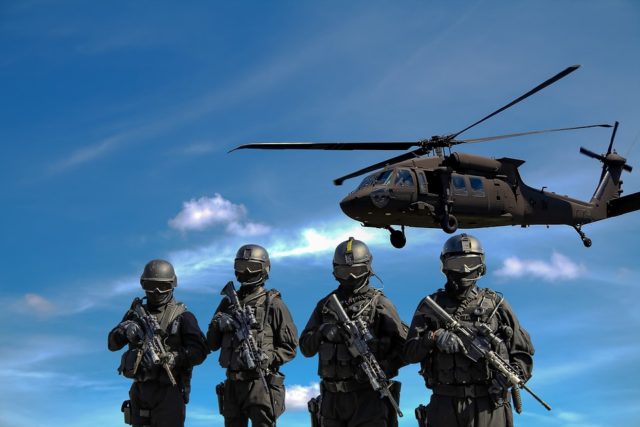 Nearly half of all U.S. arms exports over the past five years have gone to countries in the Middle East with Saudi Arabia, in particular, splurging on a host of sophisticated western weapon systems. With most stated embroiled in conflict between 2013 and 2016, the region saw its arms imports double over the past 10 years and it accounted for 32 percent of all global arms imports from 2013 to 2017.

Even though Saudi Arabia spent the most on importing military equipment in 2017, the long-term picture looks quite different. In fact, India actually spent the most on arms imports over the past five years according to new data from the Stockholm International Peace Research Institute (Sipri).

India‘s arms imports went up 24 percent between 2008-12 and 2013-17. Its spending has been fueled by tensions with Pakistan on one side and China on the other. Even though India does have a domestic arms industry which has produced the Tejas fighter jet and Dhruv helicopter, it has lagged behind both China and Russia in the development of capable weapon systems.

Sipri uses “trend-indicator values” (TIV) in its database and these are based on the known unit production costs of weapons, representing the transfer of military resources rather than the financial value of the transfer. Based on that methodology, India’s reliance on importing weapons instead of manufacturing them domestically is nothing new. Since 1950, the value of Indian arms imports is far ahead of all other countries, dwarfing that of Saudi Arabia.

For those who adhere to a realpolitik interpretation of international affairs, a bigger military is akin to a greater share of global power and influence. Whether such a framing of international relations is what dictates patterns in military spending or not, global defense spending appeared to plateau from 2009 to 2014. The largest contributor to the vast sums of money spent on defense and arms each year is the United States military. A look at the 15 countries with the highest military spending in 2015 shows that the United States spent almost 600 billion U.S. dollars, more than double that of China in second place.

This high amount of spending has helped to maintain the military dominance of the United States around the world. This stretches to a number of aspects and is evident in the United States accounting for more than a quarter of active military aircraft globally. Although current aircraft are important, new drone technology has created a new arms race arena. By 2020, the expected market value for military UAVs worldwide is set to reach 11.6 billion U.S. dollars.

Given the variance in country sizes and the strength of their respective economies, military expenditure as a percentage of gross domestic product is a useful tool for evaluating the importance particular states place on their military. In this measure Saudi Arabia stands out from all other countries. In 2015, 13.7 percent of the country’s gross domestic product was spent on defense and arms.

But when it comes to military power, size certainly matters. As such, larger states such as the United States and China have massive militaries despite spending less as a portion of their gross domestic product. China has the biggest military in the world in regards to military personnel, counting over 2.3 million people in their ranks. Despite placing more emphasis on technology and weaponry, the size of the United States military still numbers over 1.3 million.