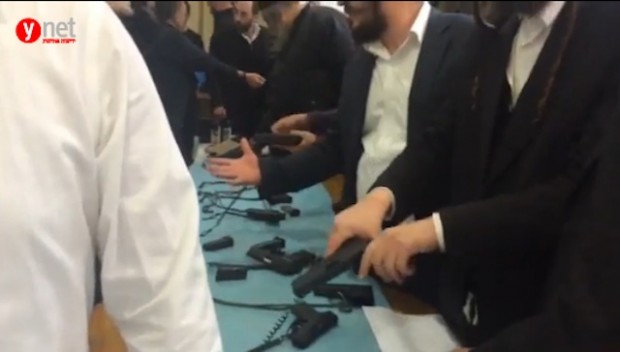 Spending time in South Florida this past week, I picked up the Florida Jewish Home newspaper and read about Glatt Kosher restaurants and other things. We learn from each other and there was information in the newspaper and guns. Jerusalem has 900,000 people and is one of the safest cities in the world. Guns are prevalent everywhere? Think again. Three percent of the people carry guns.

This figure was provided by Mayor Nir Barkat of Jerusalem. The article started out referencing the tragic loss of life in Parkland Florida which is not far from where I was hanging out in Broward County. One person out of 100,000 is the victim of homicide in Jerusalem. Barkat in fact says “only three percent” when he refers to carrying guns. Americans could learn a lot from this, but that is up to the media and its own vigilance and persistence in informing people.

There were other things that Barkat commented on including that people look out for each other. That was how the United States was in the 1950s, but that ended. He also elaborated about the great work of the IDF or Israeli Defense Forces that prevent acts of terrorism.

There are lots of people in cities in the United States today that wish to prevent homicides and these people are not being given the chance to do more, prevented by the people in government, the police, and other community organizations that compete with them for money. All this information should be assessed in thinking about Donald Trump and his leadership and that is not good in my opinion, but in being fair, it was not good in prior administrations as well.

A terrorist attack in Israel may end in 60 seconds, but it took the police six or more minutes to respond to the Las Vegas shooting and the police in Parkland did not respond until 17 people were killed. Mayor Barkat also pointed out what I have learned from being with peace makers or peace keepers in Philadelphia and elsewhere and that often the people do a better job of handling terrorism than the Israeli police do.

Donald Trump can best be described by his own son who tells us that all his father really cares about is green. He may not be a racist and he surely does not know how to deal with the violence in America. Being a puppet of the N.R.A. or National Rifle Association and its other paid adherents in government does not help the matter. We need great leadership.

Donald Trump claims that he could have stopped the young gunman in Parkland by running in there at great risk to his own life. He should show us some time in the future that his words were true and not false. Mayor Barkat intervened in 2015 when a Palestinian was knifing a Jewish man, which was international news. Trump makes international news more with his mouth and tweet.