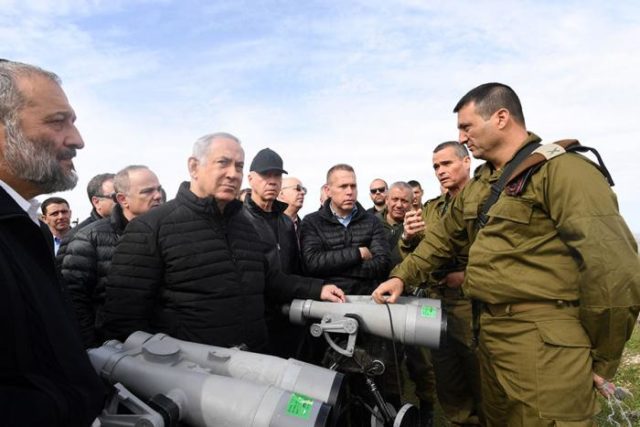 “I tell you, ye have still chaos in you.” (Friedrich Nietzsche, Thus Spake Zarathustra)

Normally, chaos is presumed to be a “bad” thing, especially in world politics. From the standpoint of classical international relations theory, one thinks especially of the fearful “state of nature” described in Thomas Hobbes’ Leviathan, a morbidly loathsome condition of rampant disorder, of consuming savagery where the “weakest has strength enough to kill the strongest,” and where the life of man (or nations) is “solitary, poor, nasty, brutish and short.” Still, when drawn from its utterly primal meanings in Greek philosophy and classical mythology, chaos is simply the beginning of everything, the good as well as the bad.

Appropriately, for Israel, Judeo-Christian theology has very similar primal roots in Genesis. Whether in the Old Testament or more broadly in ancient Western thought, chaos represents a tabula rasa which can prepare the world for all things, both sacred and profane. Even more exactly, as its conspicuous etymology reveals, chaos defines the formless gulf or germinal gap where nothing is as yet, but where absolutely all civilizational opportunity must inevitably originate.

Correspondingly, the German poet Hölderlin observed: “There is a desert sacred and chaotic which stands at the roots of the things, and which prepares all things.”

Etymologically, the Greeks thought of such a “desert” as logos, a term which should clearly indicate to us that it was anything but starkly random or without conceivable merit.

Sometimes (but not always) metaphor may illuminate. Classically, chaos, which stands at the beginning of all things, is an abyss of notably indispensable promise. For Martin Heidegger, the 20th-century German philosopher, “Chaos is holiness itself.” However paradoxical or counter-intuitive, Hölderlin’s view that the heavenly gods, the Olympians, are not ontologically superior to chaos – rather, that they draw their animating light from chaos, or from “holiness itself” – offers a powerful new understanding today. Now, if shorn of its more esoteric etymological trappings, the concept of chaos can provide a distinctly positive and aptly useful vision for expanding safety in world politics.

As a unique kind of abyss, chaos is not merely a repellant groundlessness that must indiscriminately swallow everything. Instead, it is sometimes best considered as an auspicious “openness,” a protean realm within which entirely new kinds of human opportunity may be gleaned, and is ultimately the lightful logos which can offer possibility to all good things. It follows more particularly from all this that advancing chaos in the Middle East need not necessarily be interpreted by Israeli military planners as a plainly regrettable harbinger of violence and instability, but rather as a prospectively gainful “ground” for improving national security.

How best to harness such a radical reconceptualization in Jerusalem (politics) and Tel Aviv (strategy)? This is an extraordinarily difficult and subtle question, but it would be better answered than disregarded. To begin, such an answer should suggest that Israel’s pertinent decision-makers intentionally stray beyond ordinary prudential security assessments, and venture more routinely in the direction of certain distinctly avant-garde analyses.

Among these analyses would be scholarly examinations hypothesizing various radical redistributions of power in the Middle East, including some never-before considered alignments. Moreover, such unexpected alignments, born of a palpably expanding regional chaos, could include not only assorted state-state relationships (e.g., Israel-Egypt; Israel-Jordan; Israel-Saudi Arabia; Israel-Russia), but also various state-sub state or “hybrid” connections.

Similarly unprecedented but also worth considering would be steps toward alleviating the more expressly structural conditions of chaos in the region, including perhaps even very specific forms of cooperation that move toward regional governance. Such forms, it goes without saying, would have to be both very tentative and very partial, but could nonetheless provide a very welcome start toward area order rather than area chaos. In specifically Hobbesian terms, they would be intended to supplant the corrosive “war of all against all” in the Middle East with some suitable “common power” to keep all state and sub-state parties “in awe.”

Ironically, a unique opportunity for regional movement toward greater area collective security would have been made possible by decision-maker perceptions of a more general and region-wide revulsion with anarchy and chaos. In essence, this opportunity will have been born of a growing existential desperation, of a sense that “business as usual” in regional peacemaking can no longer suffice. Of course, it is altogether possible that this particular sense of opportunity could be mistaken or misconceived, in which case any presumed benefits of chaos might turn out to have been a double-edged sword.

There is more. With regard to such an injurious inversion of opportunity for Israel, Jerusalem need only be reminded of its unchanging obligation to avoid markedly existential risks. Ultimately, this fixed obligation can be fulfilled only by assessing all risks and opportunities with thoroughly rigorous intellectual standards. Even when chaos might beckon seductively as an unanticipated font of strategic opportunity, there could be no adequate substitute for capable intellectual analysis.

In turn, any such diligent analysis must eschew “seat of the pants” determinations, and rely instead upon an amply-refined strategic theory.

Always, theory is a “net.” Therefore, only those who “cast,” can “catch.” When “casting,” Israel’s strategic planners should pay especially rapt attention to any discernible links between a prevailing or still-anticipated chaos, and the expected rationality of its relevant adversaries. After all, what might first appear as an unwittingly promising source of improved national safety could promptly be reversed by enemies who would value certain preferences in world politics even more highly than national or collective survival.

Such enemies are not historically unknown in world politics.

At this moment, the most conspicuous threat of such enemy irrationality appears to come from a steadily nuclearizing Iran. Significantly, there is no way for Israel’s decision makers to systematically or scientifically evaluate the authentic probabilities of any such formidable threat. This is because (a) any truly accurate assessments of probability must always be based upon the determinable frequency of pertinent past events; and (b) because there have been no pertinent past events (i.e., a nuclear war).

All the same, an eventual Iranian nuclear threat to Israel remains entirely plausible, and should thus suggest distinctly dire prospects for a final sort of chaos. To make suitably positive use of this fearful vision, Israel ought soon to focus explicitly and meticulously on its still-tacit nuclear strategy, or “bomb in the basement.” Here, for example, preparing to move beyond the prospectively lethal limits of “deliberate nuclear ambiguity,” Jerusalem would need to (1) rank-order identifiable thresholds of enemy nuclear peril as tangible “triggers” for certain incremental nuclear disclosures; and (2) prepare for rank-ordered release some very specifically limited sets of information concerning the invulnerability and penetration-capability of its own nuclear forces, including selected facts on targeting doctrine, number, range, and yield.

Going forward, as Israel can learn from intimations of any impending chaos, the country’s national security could be better served by reduced nuclear ambiguity than by any more traditional or orthodox commitments to complete strategic secrecy.

This counter-intuitive argument is rooted in the reasonable presumption that Israel’s continued survival must depend very largely on successful nuclear deterrence.

When philosopher Friedrich Nietzsche initially explained chaos as something deeply within each individual human being, he did not intend this idea to be a distressing negative portent. On the contrary, like the German poet Hölderlin, with whose work he was intimately familiar, Nietzsche understood that from apparent formlessness can sometimes emerge many things of great or even inestimable value. At this precarious moment in its history, Israel’s leadership would be well advised to think seriously and inventively about such markedly challenging conceptual opportunities, and then to begin fashioning certain strategic theories that begin but do not end with the “abyss.” It would not be a task for the intellectually faint-hearted, or for those who are unable to recognize new and promising strategic “muses,” but the security payoff for Israel’s national defense could still prove overwhelmingly gainful.