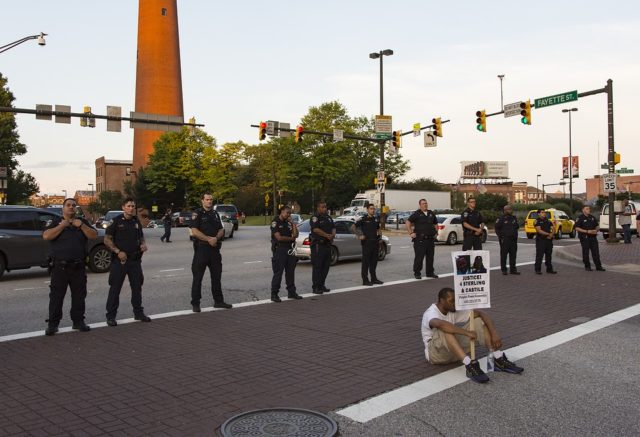 Vermont has a governor who is Republican and a police department that is properly protecting Black students after protest threats had been made about the raising of the Black Lives Matter flag at their school, Montpelier High School. A similar flag was flown in Vermont University in 2016, but it was stolen.

I reported in 2016 in my book Issues of Our Times: Educational Solutions Matter that Vermont is not a good G.E.D. state and I did not think that Bernie Sanders was offering solutions to the problem. There are things that could be done and should have been done during his campaign for President of the United States.

The passing rate difference on the G.E.D. test in 2013 between Whites and African-Americans and Whites was twenty-one percent contributing to the White domination that students feel in their school and preventing badly needed progress across the board: being eligible for military service, gaining a seat in college, and finding jobs, especially when jobs are tough to find. The students, it was reported, feel that the problem begins in schoolץ

The principal, Mike Mc Raith followed the decision of the school board to raise the flag, even though the African-American students represent 5 percent of the school population. He coordinated this flag raising with the police who he invited to participate and made a strong statement that this flag raising was not anti-police and it was also made clear that even though the words Black Lives Matter were raised this had nothing to do with any violence that has been linked to Black Lives Matter.

The singing of We Shall Overcome by a group of community people takes us back to the Civil Rights’ Movement and the great effort to Make American Great (not again). This apparently is not just a local problem and it is about time that the entire community of people wakes up. That community does include the governor who is a Republican, Senator Bernie Sanders who is an independent, Patrick Leahy who is a Democrat, its Democratic congressman, state representatives from various parties, and other community leaders that could do much better. The student leaders seem to feel that it all starts with the school, but that is only partly right.

The problem does go back in time and the schools have surely failed to effectively combat the student dropout rate and bring those dropouts into higher education and higher-ranking positions on jobs. Having Empathy Does Matter, but more needs to be done. The parents who have fallen through the cracks and who have allowed their children to fail are part of the problem as well. And White Domination should not be confused with White Supremacy ever, but the problem is persistent and needs to be redressed right now. And how well I know just how difficult things are since I know G.E.D. when others do not. It would have been much easier to help people back in 2002 or before that.

This effort is a major step forward to making a better community in Montpelier, Vermont. The police are a powerful force in the community and it has always been part of the problem where community policing has been modified due to complaints. A Washington Times opinion editor called this flag raising divisive and that Black Lives Matter could never unify. Well this Black Lives Matter flag raising just did unify the community. The board decision was unanimous.

I cannot see a Confederate flag being raised at Montpelier High School, but I can see a French flag to honor the role the French played in helping the colonies fight for freedom. The French flag was raised in Connecticut over the killings in France in 2015. Jews could easily protest the raising of the French flag, a nation that gave Jewish people the infamous Dreyfus Affair where a Jew was railroaded by the French Army or the Vélodrome D’Hiver where Jews were rounded up and arrested by the Nazis and French collaborators in 1942 and sent to death camps. I wish that a Jewish Lives Matter flag would have been raised before the Holocaust took place and a Puerto Rican Lives Matter could be raised tomorrow to express the poor performance of our government in helping citizens of the United States on that island. There are positive expressions of symbolism and there are negative expressions of symbolism. The Nazi symbol should not be raised as well.

That editorial does allude to Donald Trump who is being more and more compared to Benito Mussolini than even George Washington as a new movie about Mussolini has come out in Italy. Reviews of the movie “I’m Back” could be read by the students of Montpelier and all high schools in America. Police must come together with communities in much better ways right now. That calls for much better leadership. The Kaepernick Solution is part of that and has not been integrated by police. Let’s bring people together. Let’s kneel together and stand together for peace in communities.