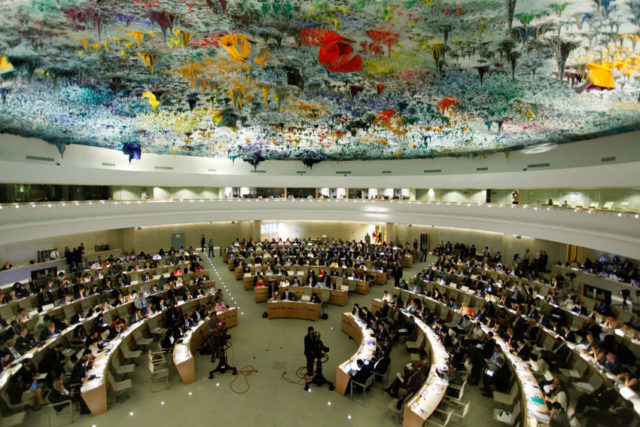 The United Nations Human Rights Council (UNHRC) published its long-delayed blacklist report Wednesday of companies doing business linked to Israeli settlements in the West Bank. However, due to immense efforts exerted by both the United States and Israel, the published report included only the number of companies from each country, rather than naming them.

The UNHRC said it had identified 206 companies so far doing business linked to Israeli settlements, where it said violations against Palestinians are “pervasive and devastating.”

“The majority of these companies are domiciled in Israel or the settlements (143), with the second largest group located in the United States (22). The remainder are domiciled in 19 other countries,” the UN human rights office said in a statement.

The report is politically sensitive because companies in the UN database could be targeted for boycotts or divestment aimed at stepping up pressure on Israel over its settlements.

Nevertheless, the US and Israel pushed to prevent the report—originally set to be published a month ago—from being made public. Towards that end, both Israel’s Ambassador to the UN Danny Danon and his American counterpart Nikki Haley worked in tandem in the organization’s New York headquarters.

Despite the initial success, the fight to keep the information from being divulged has not been won, and is expected to continue in the coming months, on the backdrop of the American threat to withdraw from the UN group over its “anti-Israel bias.”

In October 2017, 130 Israeli companies and 60 international corporations operating in Israel received warning letters from United Nations High Commissioner for Human Rights Zeid bin Ra’ad al-Hussein cautioning them of their impending inclusion in a “blacklist” of companies active beyond the Green Line in “violation of international law and UN resolutions.”

The list, which was to be published in December of that year, cited 25 well-known Israeli companies. The companies operate in different sectors—some in food manufacturing, others in services, pharmaceuticals and even high-tech—but have one thing in common: all operate in settlements, east Jerusalem and the Jordan Valley.

In an effort to scuttle the move, the pro-Israel American Israel Public Affairs Committee (AIPAC) lobby has been working in the US on promoting rapid legislation in Congress determining any company divesting its business dealings from Israel will be considered to have “capitulated” to the Arab boycott, and would thus be in violation of American law.

Ambassador Danon commented on the publication of the UNHRC’s report, saying, “Precisely on the day the United Nations has chosen to commemorate International Holocaust Remembrance Day, the Council has chosen to disclose companies operating in Israel.

“This is a black mark on the UN’s history that cannot be expunged and a disgrace for all eternity. We will continue operating using all means at our disposal, along with our allies around the world, to prevent the publication of this shameful list.”

The UN Human Rights Office on Wednesday issued a report detailing its work on producing a database of business enterprises engaged in certain, specific activities in the occupied Palestinian territory that are either explicitly linked to Israeli settlements or form part of processes that “enable and support the establishment, expansion and maintenance of Israeli residential communities beyond the Green Line.”

The UN Human Rights Council mandated the Office in March 2016 to produce a database of all business enterprises engaged in specific activities related to Israeli settlements in the occupied Palestinian territory, in consultation with the Working Group on business and human rights, recalling the illegality of the settlements under international law.*

The Human Rights Council resolution followed the report of the Independent International Fact-Finding Mission to investigate the implications of the Israeli settlements on the civil, political, economic, social and cultural rights of the Palestinian people throughout the Occupied Palestinian Territory, including East Jerusalem which, in 2013, found that business enterprises had “directly and indirectly, enabled, facilitated and profited from the construction and growth of the settlements.” The Fact-Finding Mission’s report provided a list of 10 activities that are either explicitly linked to the settlements or enable and support their establishment, expansion and maintenance.

The report details the strict and complex methodology used in carrying out the Human Rights Council’s mandate. The UN Human Rights Office reviewed information that was publicly available or received from a variety of sources about an initial 307 companies. From these, 192 companies were screened in after excluding those that were not covered by the mandate, no longer engaged in the 10 listed activities or about which there were insufficient facts to support the allegations made. In some of the cases, further research revealed 14 additional business entities relevant to the companies that were screened in, including parent companies and their subsidiaries, resulting in a total of 206 companies that were screened in out of a total of 321 reviewed by the end of 2017. The majority of these companies are domiciled in Israel or the settlements (143), with the second largest group located in the United States (22). The remainder are domiciled in 19 other countries.

Throughout the process, the Office has consulted the UN Working Group on Business and Human Rights, and held extensive discussions with States, civil society, think tanks, academics and others.

“The violations of human rights associated with the settlements are pervasive and devastating, reaching every facet of Palestinian life,” the report recalls. “Owing to settlement development and infrastructure, Palestinians suffer from restrictions on freedom of religion, movement and education; their rights to land and water; access to livelihoods and their right to an adequate standard of living; their rights to family life; and many other fundamental human rights.”

“Businesses play a central role in furthering the establishment, maintenance and expansion of Israeli settlements,” the report adds, stressing that as part of the due diligence process for companies seeking to operate in a complex environment like the occupied Palestinian territory, “business enterprises may need to consider whether it is possible to engage in such an environment in a manner that respects human rights.”

Considering the weight of the international legal consensus concerning the illegal nature of the settlements themselves, as laid out in Human Rights Council resolution 31/36, and the systemic and pervasive nature of the negative human rights impact caused by them, the report notes that “it is difficult to imagine a scenario in which a company could engage in listed activities in a way that is consistent with the Guiding Principles and international law.”**

The report also challenges the explanations put forward by companies involved in the listed activities that the businesses provide jobs to Palestinian families and help to support the Palestinian economy. It states that the presence of settlements in the occupied Palestinian territory in fact serves to depress the Palestinian economy and reduce opportunities for Palestinian businesses to thrive, as well as having a direct effect on the job market. The report also emphasizes that the corporate responsibility to respect human rights exists over and above compliance with national laws and regulations. The Guiding Principles require businesses operating in conflict-affected areas – which include areas under occupation – to conduct enhanced due diligence, which entails taking active steps to identify and assess any actual or potential adverse human rights impacts as a result of business relationships. They stipulate that such companies should be prepared to “accept any consequences – reputational, financial or legal – of the continuing connection.”

UN High Commissioner for Human Rights Zeid Ra’ad Al Hussein urged all businesses contacted by the UN Human Rights Office in relation to its mandate under Human Rights Council resolution 31/36 to cooperate with the Office, with a view to engaging in constructive dialogue.

“I am satisfied, given the resource constraints and the unprecedented nature of such a request from the UN Human Rights Council, that significant progress has been made in the Office’s efforts to operationalize the Guiding Principles on Business and Human Rights,” High Commissioner Zeid said. “I urge all sides to avoid misrepresenting the contents of this report, which has been produced in good faith on the basis of the mandate laid down by the Human Rights Council. We hope that our work in consolidating and communicating the information in the database will assist States and businesses in complying with their obligations and responsibilities under international law.”