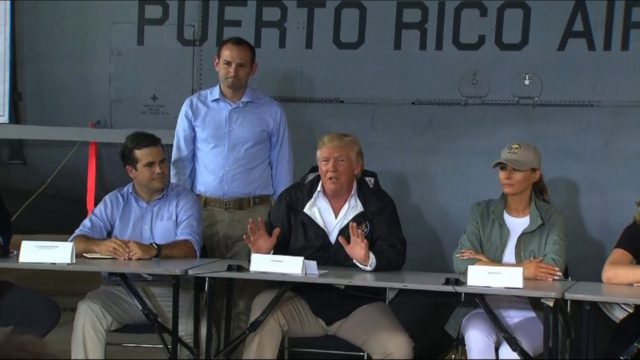 Not a tweet about the killings in Puerto Rico as the White House appears seriously distracted.
Far from the Plaza de Toros of Mexico City, there is great danger due to drugs and no plan for a wall. If this were the 2016 Presidential Campaign, it would be the moment for Trump to state “South America is bringing drugs into Puerto Rico and it’s Obama’a fault because we need a wall.” Tell Trump that there have been 46 homicides (a hundred percent increase since last year) this month alone on his watch and he will probably blame Obama, but they have been on his watch. The national homicide rate is 3.7 per 100,000, but it is 20 per 100,000 people or five times greater than the national average. And Trump has achieved those numbers from his golf cart. The White House says that playing golf makes him a better president and he surely been great at increasing homicides in Puerto Rico. Is Trump fit to be president? Here are some bullet points
Puerto Rico has not solved even one of those murders.

Puerto Rico needs more help, including technology to help solve those murders and future shootings.
We must know how many of the people who have been killed are veterans.

If any police are injured or killed because of the violence in Puerto, we should find out how many are veterans.
Trump used H-1B visas to hire foreign workers when veterans could have been hired to fill his openings.

Puerto Rico needs money and if Donald Trump had paid his fair share of taxes all these years those federal dollars could have gone to help Puerto Rico right now in its greatest time of need to pay for police, teachers, and whatever it would take for FEMA to do a much better job as over 400,000 people still do not have electricity.

The money that Puerto Rico could use could also come from the aid that Trump threatens to cut out from the Palestinians. I have mentioned before that Abbas has been paying terrorists and Trump is negotiating with a man that pays terrorists. Trump should make Saudi Arabia pay that aid to the Palestinians, especially since he campaigned hard on getting other countries to pick up the tab for the United Nations, the military, and other such things. Come to think of it, he should make those countries pay for the wall across our Mexican border and keep the money in the United States as part of American Money First.

Puerto Rico is in desperate shape as people are facing foreclosures throughout the island, which will increase homelessness.
The Puerto Rican police are using “broken windows” policing to cut down on crime. That was done in New York for years leading to mass incarceration. It is very expensive to incarcerate people and that will make Puerto Rico’s recovery even more difficult.
Puerto Rico could learn from Chicago how that city has recently decreased crime. Shot spotters being used and better community policing have helped.

I wonder how many conservative talk show hosts who care about lives and believe in having a great “war on crime” and “law and order” would take the time to tear Donald Trump apart. Why? The proof is in that crime was on the way down and except for some arrests of MS-13 gang members, Trump has little or nothing to show nationwide for his so called “war on crime.”
Much of the money to build Trump’s wall should be used to fight crime. In Puerto Rico, the US Attorney reports that drugs are coming into Puerto Rico from South America. I can report to you that there is no wall surrounding Puerto Rico from the outside world and there is no plan to build one either. There is a failed golf course in Puerto Rico that used to bear Trump’s name. Trump has little to show in Puerto Rico.

Whether it is deliberately cancelling DACA for the Dreamers or the murders in Puerto Rico, Trump is to blame. Whether it is putting the wall ahead of fighting crime across our nation, Trump is to blame. Even the crisis caused by Trump’s announcement to move the US Embassy in Israel to Jerusalem has resulted in needless deaths or killings. His scorecard on the golf course must reflect a “huge” decline in the “carnage” and not just a “killing” in the stock market.